Data compiled by Theda Skocpol of Harvard University for the Scholars Strategy Network, a progressive group of academics, illustrates how states' decisions to not create their own health care exchanges or expand Medicaid under the ACA have suppressed enrollment. According to Skocpol's research, the 14 states that are expanding Medicaid and running their own exchanges have seen enrollment in Medicaid and exchanges at around 40 percent of projections. In contrast, in the 23 states that refused to expand Medicaid or cooperate when it comes to an exchange, enrollment percentages are in the single-digits. 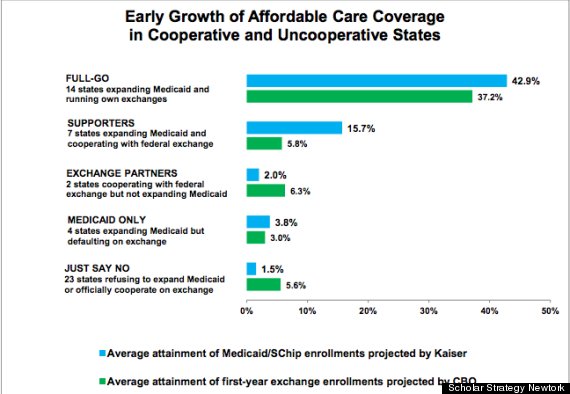 The chart illustrates the vastly different experiences with Obamacare from state to state. Texas, which has the highest percentage of uninsured in the country and whose governor, Rick Perry (R), opted not to expand Medicaid and has called Obamacare a "criminal act," saw only about 14,000 people sign up using the exchange through the end of November, according to the Department of Health and Human Services. California, which has a higher number of uninsured than Texas but a lower proportion, saw 107,087 people sign up through the state's exchange and 181,817 qualify for the state's Medicaid program through the end of November, according to federal data reported by the Los Angeles Times. Tens of thousands more signed up in California in December.

Under the Affordable Care Act, states can either run their own exchange or have the Department of Health and Human Services run it for them. Alternatively, seven states have opted for a federal-state partnership exchange. Many Republican governors wanted no ownership over the Obamacare exchanges and deferred to the federal government. The website of the federal marketplace, HealthCare.gov, has been plagued by a botched rollout with many glitches.

Thanks to the Supreme Court decision that declared the law constitutional, governors are free to decline the federal money to expand Medicaid without losing the federal money they already received to insure low-income people. For reasons similar to why they didn't set up exchanges, many Republican governors decided not to expand Medicaid under the law, despite the fact that the federal government plans to pick up all of the cost for newly eligible enrollees in the first three years and no less than 90 percent permanently.

While community organizers in red states with high populations of uninsured have tried to organize their own campaigns, the data suggests that it takes the power of a state to implement the health care law.