Shopping for health insurance is about to get a little easier. Starting this month, health insurance companies are required to use a new, standardized, plain-language form to explain what plans cover -- and what they don't. Think of it as a "Nutrition Facts" label for your health insurance.

The new form stems from a provision of the health care reform law President Barack Obama enacted in 2010. Comparing one health insurance plan to another has been difficult because each company uses its own forms and terminology, and it isn't always clear whether certain services, like maternity care, are covered.

The rollout of the new summaries of health insurance benefits is timed to coincide with most employers' open enrollment periods when workers select their health plans for the coming year.

Having a standard, easier-to-read description of how those plans work will let workers compare the plans their companies offer with each other and with other coverage options, such as a spouse's health benefits or health insurance on the individual market, said Lynn Quincy, a senior policy analyst for Consumers Union, the publisher of Consumer Reports.

"It was hugely convenient for consumers to have the health insurance information laid out in the same way. Then you can take two plans and line them up side by side and you don't have to hunt and peck," said Quincy, who spearheaded Yonkers, N.Y.-based Consumers Union's efforts to test drafts of the new document, and advised the Department of Health and Human Services and the National Association of Insurance Commissioners on the forms.

The new uniform document covers -- in no more than eight pages: How big is the deductible you have to pay before your benefits kick in? How much are co-payments for doctor visits, hospital stays, emergency care, or prescription drugs? What is the maximum amount of money the policyholder might have to pay in a year before insurance picks up the rest? The form doesn't include the monthly premium.

Having accurate, comprehensible information about health insurance is critical because buying the wrong plan can mean spending too much on premiums or worse, signing up for a year of coverage on a plan that doesn't pay for the care you need. "A health insurance policy is actually a very complex product," Quincy said. Consumers are "intimidated by it because this is a high-stakes decision," she said. "The product itself is expensive to buy and it has huge financial and health implications if you choose wrong."

Perhaps the biggest change that could benefit consumers is the inclusion of "coverage examples," or explanations of what share of the bills for common services will be covered by the health insurance company and what share patients will have to pay themselves.

A sample version of the new form from the Department of Health and Human Services includes two scenarios: having a baby and managing Type 2 diabetes. If the total bill for maternity care comes to $7,540, the patient would have to pay $2,050 under the hypothetical plan described on the form. Knowing that amount helps health insurance shoppers compare the costs for multiple plans. 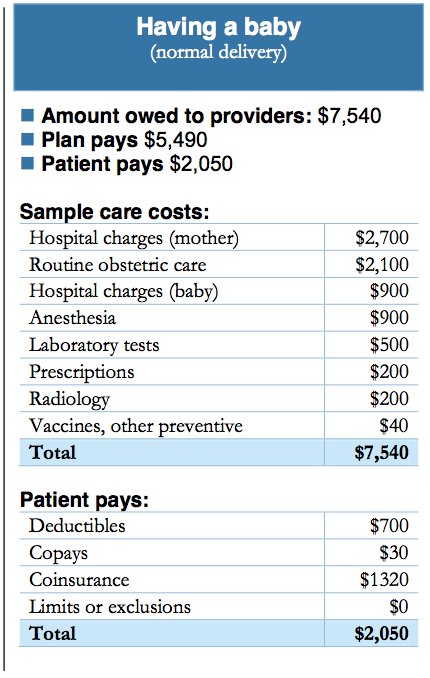 When Consumers Union sought feedback from the public about the forms, the examples made a powerful impression, Quincy said.

"It reminded them how truly expensive medical care is and how you wouldn't want to be confronting something like that without insurance. It also reminded them of how much insurance paid," she said.

Some people who were resistant to paying for health insurance changed their minds when confronted with the reality of how much it would cost them out-of-pocket to get treated without coverage, she said.

What the forms don't do, however, is make health insurance itself any simpler. "You haven't changed the underlying product. You've just increased the transparency," Quincy said. "To really help consumers, we need to actually do more with the product itself as opposed to the document."

The health care law aims to do that in some areas. For instance, plans sold to as many as 25 million individuals and small-business employees on health insurance "exchanges" (available starting in 2014) must provide a standard set of minimum benefits."

PHOTO GALLERY
What Will Health Care Reform Do For You?

1 / 8
You Will Not Be Denied Over A Pre-existing Condition
Health insurance companies won't be allowed to deny coverage to Americans in frail health, according to <a href="http://www.newsday.com/news/health/gap-in-health-care-law-s-protection-for-children-1.1828037" target="_hplink">ABC News</a>.
Getty