Hey, everyone! Did the rampant coverage of the health care reform debate leave you utterly beside yourself with confusion and under the strong impression that most of the coverage focused on the political horserace crap rather than a studious explanation of how reform was going to impact your life? Well, you're not alone -- that's exactly how the media covered the matter, because they are terrible.

A new study by Pew Research, in which the organization undertook a "comprehensive study of more than 5,500 health care stories in the mainstream media from June 2009 through March 2010" tells the sorry tale. Between June of 2009 and March of 2010, health care reform dominated the "newshole." During that time, the story proved to be catnip for "ideological talk shows." Says Pew, "the subject was more than twice as big in the talk show sector as it was in the overall media." But here's the big takeaway: 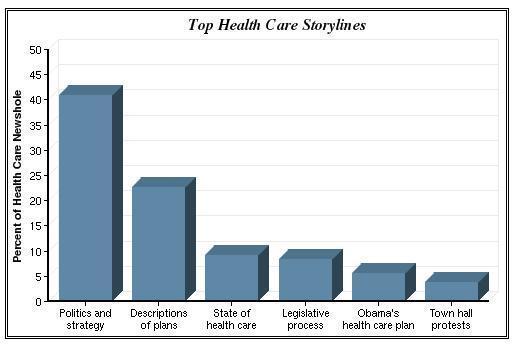 The above graph tells the the sorry story of the misshapen ratio of coverage, in which more than twice the amount of time devoted to actually explaining the various plans was instead given over to "politics and strategy" and the "legislative process." Coverage of the latter category was mostly marked by ordinarily rational people screeching like hyenas about how radical the budget reconciliation process was, when it is actually quite ordinary. It also featured people proving hysterically wrong about very basic matters, such as Chris Matthews in a howlingly ignorant segment he conducted with Representative Alan Grayson (D-Fla.).

Of course, it should be no surprise that the coverage was dominated by talk of strategy and "who's up, who's down" and polls and wild-eyed speculation on the shape of future electoral fates, because this is all your political media care about. Actually explaining what a health care plan does would require an attention span and a dedication to something other than simpleminded goofery. And it's also no surprise that "state of health care" ranked so low -- to actually know something about the "state of health care," cable news would have to be aware of the existence of people who aren't well-compensated media professionals.

Elsewhere, Pew found that despite the fact that "liberal talk show hosts devoted more airtime to health care than conservative hosts," the opposition to health care reform nevertheless "won the message war." This was accomplished through a very complicated and nearly inscrutable strategy called "lying."

Additionally, Pew finds that "Barack Obama was a dramatically diminishing presence in the health care story -- until he reemerged in 2010," but God knows you probably already knew that.