Today begins the House GOP's latest kabuki pageant, entitled "Let's Repeal Obamacare Despite The Fact That Most Americans Prefer It Or Want It Expanded Even More, Because We Have To Toss A Bone To The Kooks." It occurs alongside a simultaneous movement, spearheaded chiefly by Sen. Chuck Schumer (D-N.Y.), to pressure health care reform opponents into dropping their own government provided health care.

Thus far, Schumer's campaign has found very few takers. And that stands to reason! The health care plan that you and I provide for our Congresscritters is really, really cherry. Oh you should see it! It's wonderful! You'd be loathe to part with it, if you were fortunate enough to receive it because a number of powerful corporate interests came together to ensure it was provided to you. But my favorite response from anyone declining to forgo their health care against pressure from Schumer has to be this one, from freshman Rep. Michael Grimm (R-N.Y.):

"What am I, not supposed to have health care?" he said. "It's practicality. I'm not going to become a burden for the state because I don't have health care, and God forbid I get into an accident and I can't afford the operation. That can happen to anyone."

I know, right? You read that, and you think, "Wow. That actually sounds like a stirring defense of expanding the franchise of health care to more Americans." Because tomorrow, this could happen to anyone. At any moment, an uninsured American could get into an accident. When the ambulance takes that person to the hospital, that person will get treated. And if that person can't afford it, don't worry, the existing system will hound him into bankruptcy and debt. And if they cannot get their scrilla, the "state" -- that is, you and me -- will be burdened with the costs. When that person lands in a destitute state, there will be further burdens placed on "the state." Unless the plan is for this person to crawl off into the woods to die of shame from that time that person got into an accident.

Health care reform: it's not perfect. But in addition to reducing long-term deficits, it also decreases these burdens. 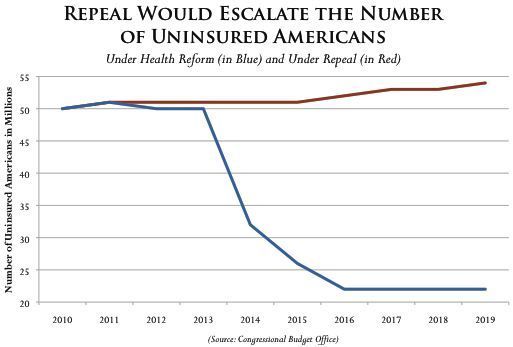 Now, I don't know why Grimm can't do without the Congress health care plan. In the first place, he's a Marine who served in Desert Shield and Desert Storm, so why he can't simply receive the health care benefits he's entitled to as a result of his military service is a mystery. Beyond that, when most of us get jammed up by operations we cannot afford, we can, as best as possible, fall back on the kindness of friends. And Grimm has some powerful friends with deep pockets: he received $143,450 in contributions from real estate interests, and $31,950 from the securities industry. Heck, the man received $24,900 from health care professionals, so maybe some of those dudes can hook him up if he needs the help.

Naturally, those aren't the sorts of pals that most of America's uninsured run with in their daily lives. So my diagnosis of the hypothetical, "Will Michael Grimm be okay if he gets into an accident and the treatment is expensive?" is "Yes, he's going to be just fine." And I'm sincerely glad for that.

Rep. Grimm really is quite a lucky ducky!