Overall, public opinion remains mixed and heavily influenced by political party affiliation, the Henry J. Kaiser Family Foundation poll, conducted earlier this month, reveals. Forty percent of those surveyed said they have an unfavorable view of the reform law, 37 percent hold a favorable view and 23 percent had no opinion. Among Republicans, 68 percent said they had an unfavorable opinion of Obamacare, while 45 percent of independents said they had an unfavorable opinion. Among Democrats, 58 percent said they liked the law. These findings are roughly consistent with the foundation's polling over the last three years, although the percentage with a favorable view has crept downward in recent months. 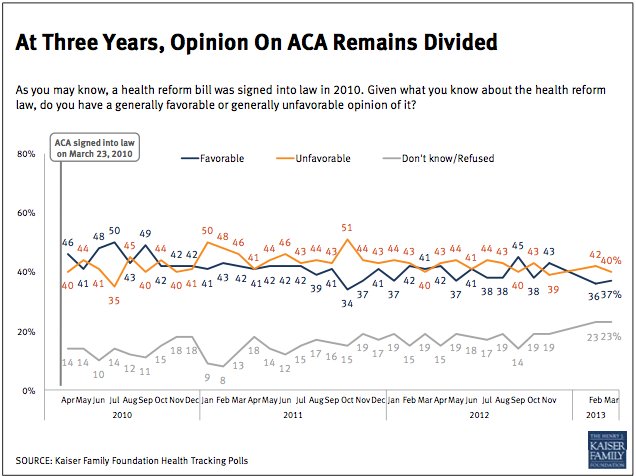 The poll underscores the massive challenge facing the Obama administration, the states, the health insurance industry and others with an interest in health care reform succeeding. Small businesses and individuals who don't get health benefits at work will begin shopping for coverage and learning whether they qualify for financial assistance or Medicaid benefits on Oct. 1.

Perhaps most worrisome for the administration is the Kaiser Family Foundation's findings that the American public is still uninformed and confused about what's in the law. 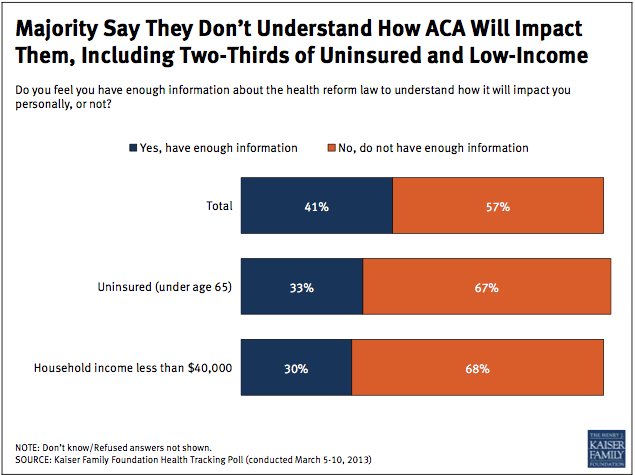 In fact, public awareness about key provisions of the law, including the availability of health insurance tax credits for individuals and small employers, has actually declined since April 2010, the survey shows -- despite three years of continued public debate about Obamacare.

As other polls have shown over the past three years, people reported favorable views of individual elements of the health care reform law even as many said they oppose Obamacare as a whole.

What people didn't seem to know was that many of the policies they like are included in the Obamacare law. Just over half of those surveyed were aware that the law provides tax credits to small businesses that offer health benefits to their employees. Fewer than half knew about the law's enhancements of Medicare's drug benefit, and just over half said they knew Obamacare forbids health insurance companies from denying coverage to people with pre-existing conditions. 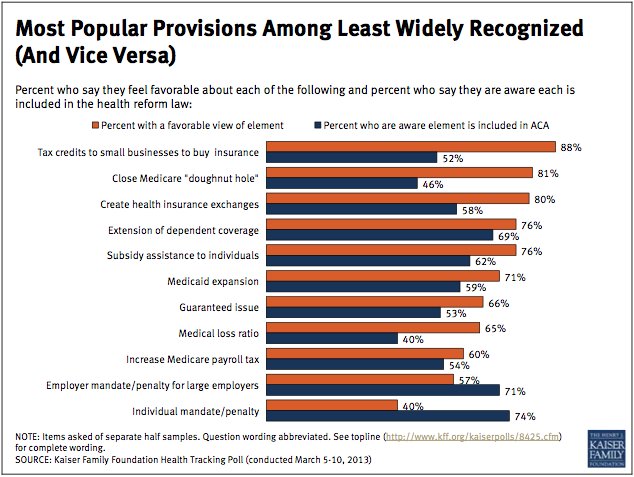 Meanwhile, a large pluralities of the public continue to falsely believe that the Obamacare includes so-called death panels that would ration health care for Medicare enrollees, reduce what Medicare covers, provide health benefits to undocumented immigrants and create a government-run "public option" health insurance program to compete with private companies.