The amount the United States spent on health care went up last year by the smallest amount since federal scorekeepers started tracking these dollars half a century ago, according to an audit issued Wednesday. The news might come as a shock to Americans struggling to keep up with rising costs.

Combined spending on health care by households, businesses and the government rose 3.6 percent to $2.9 trillion in 2013, the fifth straight year it increased by less than 5 percent following decades of faster growth, the Office of the Actuary, an independent office within the federal Centers for Medicare and Medicaid Services, reported in the journal Health Affairs. Health care accounted for 17.4 percent of the whole economy, the same as in 2012.

To Americans facing ever-higher health insurance premiums and bigger out-of-pocket costs at the doctor’s office, hospital and pharmacy, however, these promising trends may seem at odds with their own lives and household budgets.

There’s a disconnect between the big-picture numbers and people’s perceptions because Americans’ wages aren’t rising, meaning health care costs eat up more of people's incomes, and because insurance plans increasingly require patients to pay a bigger share of the bill when they use the health care system, said Larry Levitt, senior vice president at the Henry J. Kaiser Family Foundation.

“The fact that health care spending growth has been so low for a number of years now does trickle down to what people themselves are actually paying out of their own pockets,” Levitt said. “The problem is, even when health care spending is growing so slowly like this, when people’s incomes are stagnating, it still doesn’t necessarily feel so good.”

Even as the national numbers look rosier, the conditions for consumers seem about the same. Last year, households were responsible for 28 percent of health care spending -- like insurance premiums and out-of-pocket costs -- the same share as in 2010, the new audit shows.

Still, the broad benefits of less health care spending growth to the U.S. economy and the federal budget are clear: Less of the economy devoted to health care means more money that can be spent on other things consumers and businesses want. Lower growth in spending also eases the burden on taxpayers funding programs like Medicare and Medicaid.

The lower rise in national health care spending in 2013 was the result of a mix of factors, the Centers for Medicare and Medicaid Services actuaries report. These figures account for the prices paid for health care and the amount of services and products people used.

Spending on health insurance, Medicare, hospitals, physicians and patients’ out-of-pocket expenses rose more slowly than in 2012, as did overall prices for medical care and products. But spending on prescription drugs and Medicaid grew faster in 2013 than the year before.

The Office of the Actuary expects these record-low rates of increase won’t continue forever. Spending is projected go up faster this year and in the near future, though it’s still expected to be slower than during prior decades. U.S. health care spending more than doubled from 2000 to 2013, and it increased more than by a factor of more than 100 since 1960.

Health Care And The Economy Grow Together, And Apart 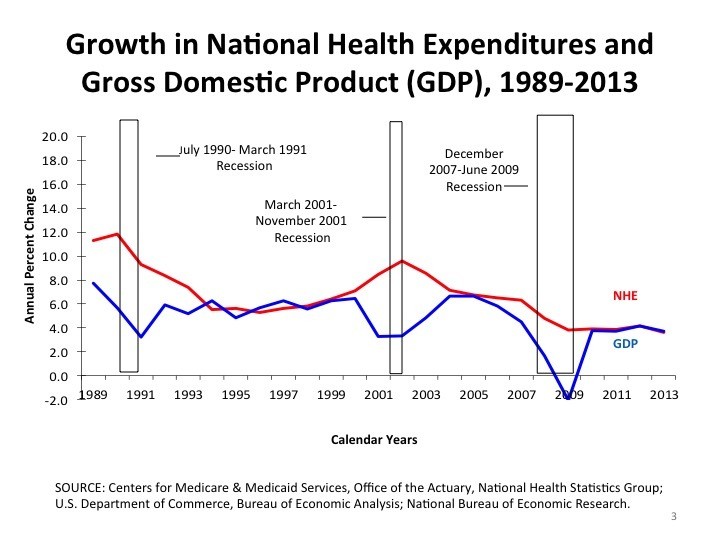 This year, the agency projects health care spending will increase more than 5 percent to $3.1 trillion, driven in part by faster economic growth and in part by new Obamacare spending on subsidized health insurance and Medicaid coverage for millions of people, according to a separate report published in September.

The causes of the slowdown and what the future holds for health care spending overall and individual consumers can’t be precisely pinned down with the information available, Levitt said. “Everyone’s crystal ball is fuzzy, so there’s no telling for sure what’s going to happen,” he said.

The Office of the Actuary maintains, as it has for several years, that slower growth is mostly the result of hangover from the Great Recession that ended in 2009 and the sluggish recovery that followed, and that the spending growth will tick back up when the economy strengthens. During economic downturns, workers lose jobs -- and with them, pay and insurance -- and use less health care. When those jobs and benefits return, past experience shows health care spending tends to increase more quickly again.

But that explanation can’t account for major changes occurring in the U.S. health care system, starting with the Affordable Care Act, also known as Obamacare, which became law in 2010. Although the report issued Wednesday doesn’t account for the millions who gained health coverage this year because of Obamacare and the spending that resulted, the law had direct and indirect effects on the health care system before 2014.

President Barack Obama credits the law that bears his name with part of the slowdown in health care spending increases, and the government actuaries partly agree. According to the report, cuts in Medicare payments to health care providers and insurers and other policies in the law helped constrain spending last year. But the actuaries also note other parts of the ACA, like improved Medicare prescription drug coverage, increased some spending.

The effects of Obamacare and of health care companies operating more efficiently are hard to measure, making it impossible to prove whether the current period of slow spending growth is just a dip related to the recession or a more promising development, Levitt said.

“There is something else going on here,” Levitt said. “It sounds like a cop-out to say that we can’t quantify the effects of the Affordable Care Act or changes in health care delivery, but that doesn’t mean it’s not true,” he said. “There’s reason to be cautiously optimistic that the kinds of structural changes that have occurred in health care will help keep cost increases lower in the future, even if the economy improves.”

Who Spends All That Money? 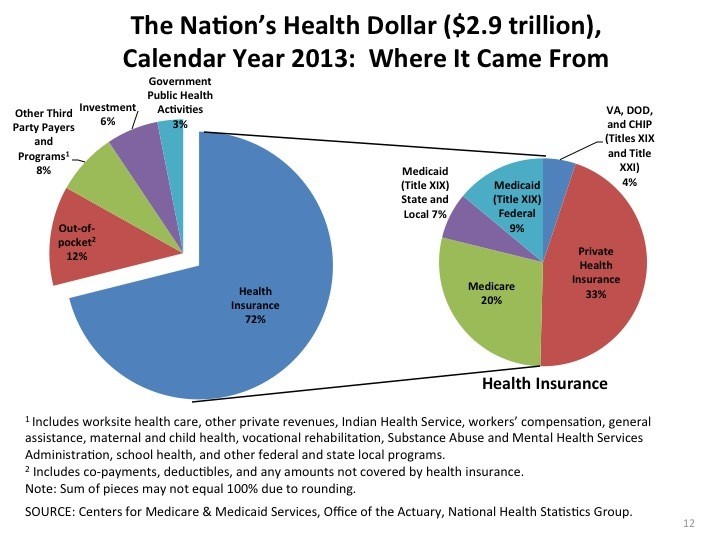 Who Gets All That Money? 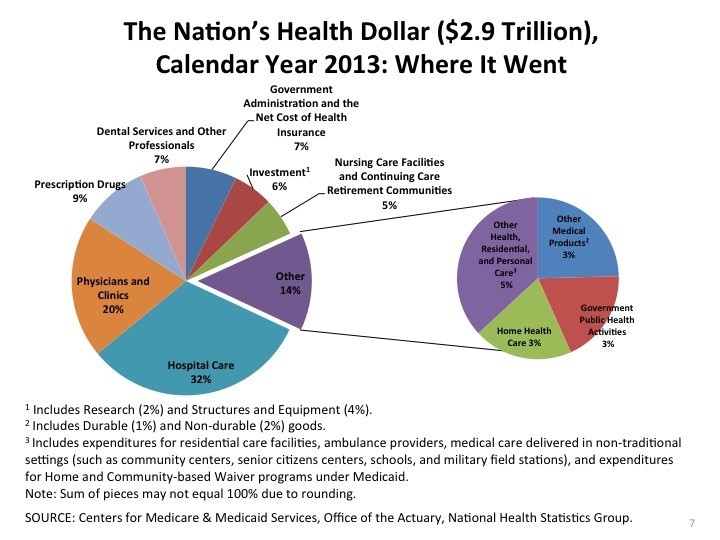