New York, NY. December 10, 2009 -- On Thursday morning, a group of friends and colleagues, mostly middle-aged, sat and chatted over coffee at a midtown deli near Grand Central Station. Then Laurie Wen, an organizer with the Mobilization for Healthcare for All, showed up with a box of granola bars and a bag full of T-shirts, and everybody cheerfully rolled up their sleeves to write the number of an attorney on their forearms.

Two hours later most of them were in jail, and the "fourth wave" of a nationwide campaign to use civil disobedience to push for a single-payer plan had delivered its demands to the doorstep of Senator Chuck Schumer's midtown Manhattan office.

It's a particularly poignant day for Rich Marini, one of the advance team of people sitting here today -- and not in a good way. 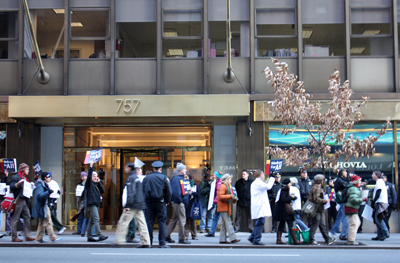 "Ironically, today is the day that my company stopped providing health care to its employees," says Marini of Staten Island, a programmer at an IT firm called Tango Inc. "Henceforth all employees will have to pay in out of pocket about $8,000 a year. We were all told we have the "opportunity to re-enroll."

On the second floor of the deli, Laurie reminds everybody that in at least 20 other cities across the country, people are sitting in at the offices of health insurance companies and politicians. Senator Chuck Schumer has raised the ire of these activists in New York because of his role in recent negotiations in the Senate to lower the age of eligibility of Medicate from 65 to 55. The catch: this is viewed by many as a way to abandon the public option, or any anemic version thereof that remains in legislation currently being considered by the Senate. 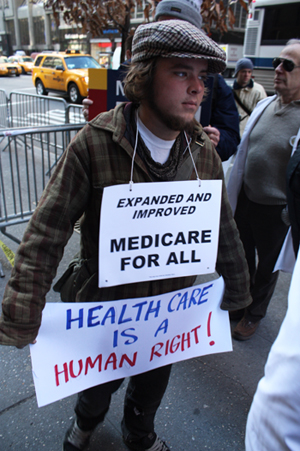 This bit of horse-trading is seen by activists here as a paltry trade-off, and one that reflects the senator's friendliness to the insurance industry over the desires of his constituents. According to OpenSecrets.org, Schumer is the biggest recipient in Congress of donations from the HMO/Health Services category, raking in $99,650 in campaign contributions this year. At press time a message left with Senator Schumer's New York press office was not returned.

"The frustration of his constituents is very real," says Dr. Laura Boylan, a neurologist who and member of Physicians for a National Health Program while marching in a boisterous picket line in front of Schumer's office before giving a brief address to the crowd. "He's claimed to be for single-payer in the past, but he hasn't moved on anything. I don't want to see any more people who have bleeding in heir brain because they can't afford to take care of their diabetes. We're not going away."

One thing that's impossible to ignore about this emerging movement is the willingness of health care professionals here in New York, and across the country, to risk arrest and the resulting legal headaches, borne out of their experiences in the trenches of America's dysfunctional health care system. 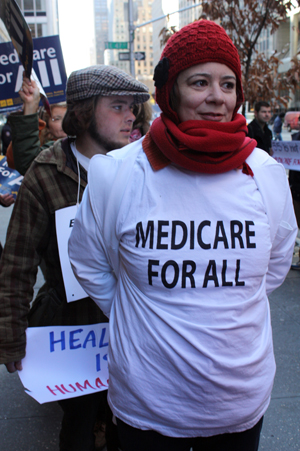 "In my work, I see a lot of poor women who won't be covered by the Democrats' new plan," says Dan Murphy, a 35-year old medical student with close-cropped blond hair wearing dark blue scrubs. Dan, who specializes in OBGYN, is one of the first to link arms with fellow activists in front of Schumer's office, obstructing foot traffic in and out of the building. And he's one of the last to be handcuffed and pulled to his foot before being deposited in a paddy wagon nearby. At the end of the action nine had been arrested on the relatively light charges of disorderly conduct.

"I think we're going to see many more of these, because the fight is far from over," says Laurie Wen, busy exchanging contact details with the legal observer on the scene. "Nothing important was ever won in this country by us accepting crumbs."