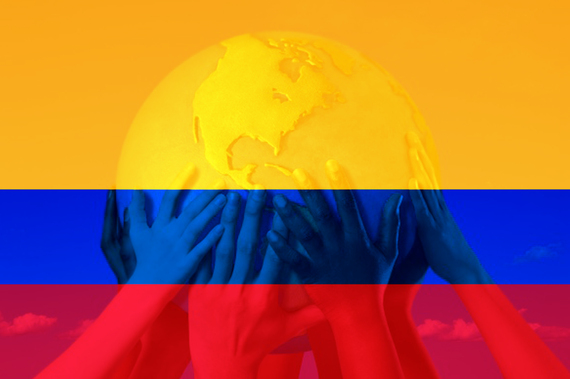 Following the attacks in Paris late last year, Somali-British poet Warsan Shire's poem, What they did yesterday afternoon, flooded the Internet in response. The poem read:

later that night
i held an atlas in my lap
ran my fingers across the whole world
and whispered
where does it hurt?

How can we begin to heal? Where does peace begin?

At the Open Hands Initiative, we believe that the way to build peace is to connect. And that starts with an open hand.

We believe that public diplomacy between countries and ordinary citizens not only cultivates mutual respect and understanding, but helps to build a reservoir of goodwill that can withstand even the most fundamental policy differences.

Public diplomacy not only teaches us how to empathize, but it gives us a platform where empathy can be actualized and used. Public diplomacy helps us to build relationships across political boundaries and realize that people, the world over, are just people. Like us, they are people who share similar hopes, fears, aspirations, dreams, and ambitions, attempting to navigate the spheres of everyday life.

Often times, when we are truly open to connect -- to extend an open hand to engage in constructive dialogue and learn from one another -- we realize that we don't always live up to the promise of who we, as a country or individual, want to be.

Last month, the U.S. invited a United Nations delegation of human rights experts from Costa Rica, Poland, and the United Kingdom to assess good practices and gaps regarding women's rights in the U.S. During their visit, the delegation traveled to Alabama, Oregon, and Texas, evaluating a wide range of U.S. policies and practices and holding open dialogue with a host of interlocutors: federal and state officials, members of women's organizations, medical professionals and private citizens.

What they found was a gap between rhetoric and reality, between the values we espouse and the values we practice. In a news release, the delegation reported that the U.S., a "leading state in formulating international human rights standards, is allowing their women to lag behind". U.S. women, the release describes, have "missing rights" to things like paid maternity leave and access to comprehensive reproductive health care. Moreover, women who are poor, belong to ethnic minorities, migrant women, LBTQ women, women with disabilities and older women, were particularly vulnerable.

Starting tomorrow, the Open Hands Initiative will host its 5th international people-to-people exchange to foster dialogue and goodwill between the U.S. and developing countries. The three-week exchange, "Post-Conflict Colombia and Public Health", a project of the Harvard Humanitarian Initiative, in collaboration with the School of Medicine - University of Antioquia, will provide 16 masters level students in public health, from the U.S. and Colombia, a cultural and educational opportunity that will encourage dialogue and increase mutual understanding around public health issues, with a focus on displaced and vulnerable populations.

Led by world class faculty from Harvard University and the University of Antioquia, students will apply theoretical concepts and methodologies in surveying and providing health support services to the people of Granizal, a local community for displaced persons just outside Medellin, Colombia. Through in-class study and field work, they will work together to formulate sustainable, scalable, innovative, and measurable approaches to address the needs of vulnerable populations. Framing their approaches to capture local context, students will apply an interdisciplinary lens to incorporate the progressive social development initiatives the civic leadership of Medellin has developed in the post-conflict period. Students will explore how transportation networks, urban spaces, economic development, and educational initiatives have contributed to the engagement and reintegration of displaced persons into the larger society and how these social determinants of health have impacted health outcomes for the Granizal community.

While the exchange focuses on creating meaningful impact for the people of Colombia, the U.S. will have much to gain in developing approaches to addressing the needs of vulnerable populations, such as those groups identified by the U.N. delegation, within the U.S.

Exchanges such as this, allows us to take what's best about our societies and share them with others, while highlighting the things that are common to us all. The Post-Conflict Colombia Public Health project brings to the forefront that health is a universal value and a human right.

Celebrating our shared values, such as health, rather than our differences, can serve to unify seemingly disparate communities and build bonds to create a healthier and more prosperous world for everyone.

This Public Diplomacy in Health exchange will serve to encourage stronger ties between the people of both countries and to engender deeper connections among health professionals engaged in social development and humanitarian response. Ultimately, the Open Hands Initiative hopes that this joint study and research can help inform and influence future thinking around public health policies and practices in both nations and throughout the world.

This post is part of a series entitled "Post-Conflict Colombia and Public Health" a project of the Open Hands Initiative and the Harvard Humanitarian Initiative, in collaboration with the School of Medicine - Universidad de Antioquia. For more information about the project, read here.