Health and Human Services Secretary Kathleen Sebelius let loose a bombshell during her appearance before a congressional committee Wednesday: Health insurance will cost more next year than it does this year!

Here are some other things that are "likely" to happen in 2015: The sun will rise every morning, "The Big Bang Theory" will be popular, and the Chicago Cubs will not win the World Series.

For the first time ever in the history of insurance! RT: @hillhealthwatch: Premiums will rise in 2015, says Sebelius http://t.co/AjLnMOXrC9

This chart from the Henry J. Kaiser Foundation and the Health Research and Educational Trust, based on a survey of employers, shows just how much costlier health insurance has become. Since 1999, premiums for a single worker rose almost 270 percent. 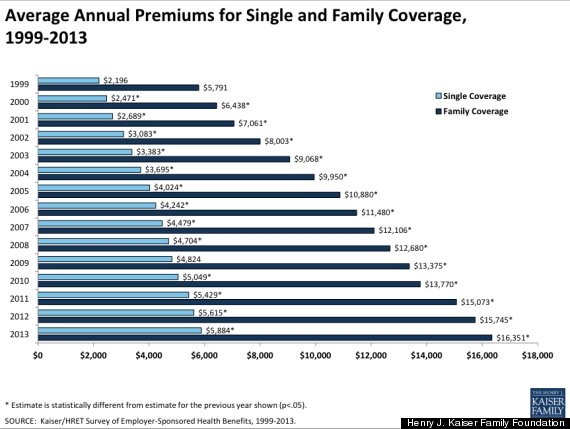 Those figures refer to job-based health insurance, so prices are different than the cost of individual coverage available via Obamacare's health insurance exchanges, which are for people who don't get coverage from employers. Comprehensive data on the individual market are harder to come by, but a report from online insurance broker eHealth about the products they provide shows rate increases are the norm for these plans, too.

The average premium for an individual rose 32 percent between 2005 and 2012, according to the company's report.

The Wall Street Journal article Boehner tweeted starts like this:

Health and Human Services Secretary Kathleen Sebelius said health-insurance premiums are "likely to go up" in 2015, an acknowledgment that the Obama administration doesn't believe the sweeping changes to the health-insurance marketplace will end premium increases in the near term.

Here, the newspaper appears to take President Barack Obama's administration to task for not believing something it never claimed to believe in the first place: That, within the remarkably short period of 24 months, decades of health insurance rate hikes would suddenly reverse themselves.

Granted, Obama and his deputies shoulder blame for making it easy for people to believe that acknowledging something as obvious as increasing health insurance premiums constitutes news.

The health care reform law is called "the Affordable Care Act," for one thing. And the administration routinely cites the lower prices that some people will pay for coverage bought on the health insurance exchanges, chiefly those with low incomes now getting subsidized rates, and those whose pre-existing conditions, gender or age subjected them to higher rates under the old system. What they don't spend much time talking about are the people whose premiums rose this year as a result of the law's benefit mandates and the fact that those other folks are paying less.

And then there's the lingering aroma of Obama's implausible 2008 campaign pledge that his health care policies would save every household $2,500 a year on insurance. Obama's campaign platform isn't the same as the Affordable Care Act, but PolitiFact still rates this a "broken promise."

Sebelius has a guess, via the Wall Street Journal:

"I think premiums are likely to go up, but at a smaller pace than what we've seen since 2010," Mrs. Sebelius said, adding that she thought the likely increases would be less significant than they had been in the years before the federal health-care law was enacted.

Of course, Sebelius is only speculating. No one knows what health insurance premiums will look like on the exchanges next year.

The relatively small number of younger (and presumably healthier) people who've signed up so far is a cause for concern that mostly sick people bought this coverage, and that they'll run up big medical bills. That would lead insurers to raise rates for 2015 to make up the money. There are guardrails built into the law to mitigate this problem, so the effects on premiums may be modest anyway.

Even health insurance companies don't know what's going to happen because they don't yet know how their new customers will behave, and won't have much time to figure it out before they propose next year's rates to federal and state regulators.

But Sebelius isn't making her rosy prediction in the absence of at least some evidence.

Overall national health care spending has been growing at historically low rates over the last few years, for a start. Whether that's related to the Affordable Care Act is debatable, but the trend isn't. Furthermore, health insurance premiums for job-based plans also have been rising more slowly than usual, as the Kaiser Family Foundation and Health Research and Educational Trust data show. If things continue along this trajectory -- a very big if -- then future annual premium increases could be smaller than what consumers have gotten used to.

John Boehner didn't tweet about any of that, though.