WASHINGTON -- A new survey released last week by the Kaiser Family Foundation shows that "little has changed on the public opinion front" regarding health reform since the passage of the Patient Protection and Affordable Care Act (ACA) a year ago. Americans remain sharply divided in their views of the new law, and more than half say they are still confused about the law and its impact.

A year ago, President Obama declared that by signing the bill into law, "the overheated rhetoric over reform will finally confront the reality of reform." Then Sen. Evan Bayh (D-Ind.) predicted that "some of the misconceptions out there" about the reform bill would be proven "false between now and the [2010] election."

As the monthly Kaiser Foundation tracking surveys show, those high hopes have so far failed to materialize and attitudes about the health reform law have remained essentially constant over the last year.

First, roughly half of Americans (53 percent on their most recent survey) continue to say that they are "confused" about the health reform law. A similar percentage (47 percent this month) say they lack sufficient information about the law to know how it will impact them personally. 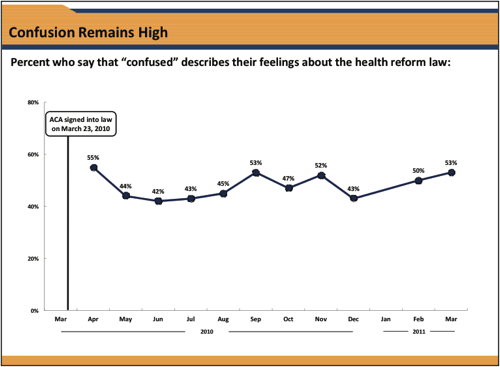 Second, when asked their overall impression, Americans have remained divided over the past year, with slightly more unfavorable (46 percent) than favorable (42 percent) on the most recent survey. 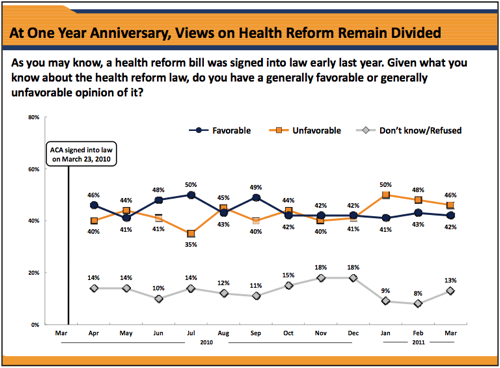 A new Gallup survey released today finds roughly the same result. Americans are divided on whether passage of the law that "restructures the nation's healthcare system" is a good thing (46 percent) or bad thing (44 percent). 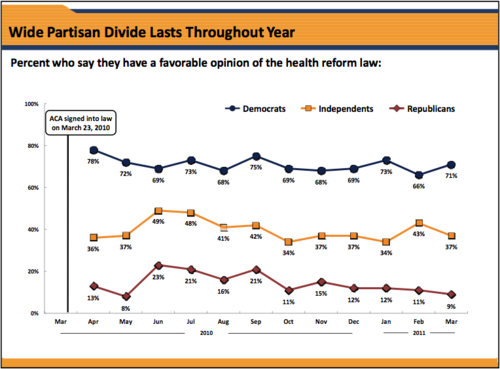 So why no change?

The main provisions of the bill have not gone into effect and so Americans are neither experiencing its benefits nor dissuaded from the fears raised by opponents of the law. As I wrote in a National Journal column last year (the article now restored link apparently broken in their redesign), the most relevant historical parallel may be the reaction among seniors to the prescription drug benefit in Medicare, now known as Medicare Part D, that was enacted in 2003.

Despite initial support for the concept of a prescription drug benefit, the bill that President George W. Bush signed into law was unpopular with seniors after it passed. When Kaiser conducted its first tracking survey in February 2004, three months after the new Medicare drug benefit had passed, more than half of seniors (55 percent) had an unfavorable impression, and only 17 percent were favorable. 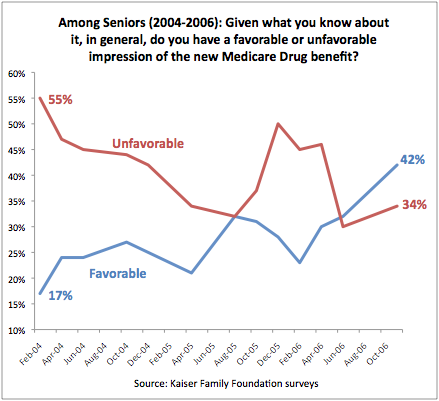 Negative impressions remained dominant among seniors for the next two years, albeit with a dip in 2005, shortly after the government began a marketing campaign to seniors to promote its benefits. But negative impressions rose again as seniors began the often confusing process of making choices and signing up for drug plans. It was not until seniors began to gain actual experience with the program's benefits that their views grew increasingly positive.

Back in 2009, I asked Bob Blendon, the Harvard professor of health policy who has studied Kaiser's opinion data for decades, what this experience might predict about attitudes toward health reform should it pass. "If you give benefits out right away," he said at the time, "and the benefits affect a lot of people, then…there will be support and people will like the bill."

But the major provisions do not go into effect until 2014 and relatively few benefit from those enacted so far, such as the high-risk pools for those without insurance due to pre-existing conditions.

Interviewed late last week, Blendon expressed little surprise over the lack of change in health reform attitudes, although he believes the delay before full enactment of health reform has an important impact on the politics of the issue as well. Americans that oppose the bill, he says are most "worried about the impact on Medicare or government interfering with medicine or the costs [or] the deficit." Those fears will remain hypothetical until at least 2014.

In contrast, he explains, the original Medicare law "was implemented one year after it was in fact enacted. So you could hate it or like it or [say] it was a big mistake, but you could no longer discuss hypothetically what could go wrong." Similarly, "the drug benefit was up and running within two years."

The lack of change in attitudes toward health reform comes as no surprise to Brendan Nyhan, a Robert Wood Johnson Scholar in Health Policy Research at the University of Michigan, who agrees that real change in public opinion on health reform is unlikely until 2014. Nyhan argued a year ago that attempts to dispel some of the "false and misleading claims" made about the law during last year's debate would fail if based solely on communicating corrective information. Until "the most far-reaching changes" take effect in 2014, he wrote, "false claims about the contents of the bill will just morph into harder-to-debunk predictions about the consequences of reform."

Blendon predicts that the outcome of the 2012 election, not any variation in public opinion over the next four years, will be critical in determining the ultimate fate of the health reform law. ACA will go into effect on schedule, he says, "if the Democrats [hold] the presidency and one House [of Congress], even if the public opinion looks identical or a little more negative." On the other hand, he says, if Obama loses in 2012 and the Republicans gain a Senate majority, "then part of this bill goes and will never be implemented."