A steaming bowl of chicken noodle soup is a go-to meal for a cold day or when you’re feeling under the weather.

Research even suggests that chicken soup has healing properties: It may offer anti-inflammatory benefits, which could relieve cold symptoms, according to one study. Another found that hot chicken soup may alleviate sinus congestion.

Homemade chicken noodle soup is the healthiest option because you can control the amount of salt and load it up with vegetables, said Danielle Frost, a registered dietitian in central Arkansas. But not everyone has time or access to fresh ingredients to make homemade soup, so checking out the canned variety makes nutritional sense.

“Canned soup is very convenient, relatively inexpensive, and, of course, it’s delicious, which is an important factor,” Frost said.

Since chicken noodle soup is broth-based, most canned products are already low in fat. But Frost urges consumers to check the label for sodium and protein. About 10 grams of protein per can is a good target. Anything higher is a bonus, she said, since protein keeps you fuller longer.

As for salt, Frost recommends choosing canned chicken noodle soup with no more than 300 mg of sodium per serving. An ideal sodium limit is 1,500 mg per day ― and definitely follow a daily value of no more than 2,300 mg ― according to the American Heart Association.

Serving size is another factor to consider, said Luis Gonzalez, a Chicago-based registered dietitian. “Nutrition information is based on serving size, and most cans include about two servings,” he said. “If half the can, which equals one serving, is not enough, adding more water will add volume, as well as dilute excess sodium.”

Which canned chicken noodle soups are actually the healthiest? We asked Frost, Gonzalez and Emily Tills, a Syracuse, New York-based registered dietitian nutritionist and nutrition coach, to rank 10 popular versions based on nutrition.

Campbell’s condensed chicken noodle soup is a classic and one of the most popular canned soups. But Frost, Gonzalez and Tills all said it’s the least-healthy choice because it’s so high in sodium: 890 mg per serving, or 39% of your daily value. And Frost said the listed serving size of half a cup is smaller than that of other brands.

Despite being lower in calories than the Progresso traditional version, the light soup contains nearly as much sodium: 660 mg, or 29% of your daily value from half the can, Frost said.

“Calories aren’t everything, and I think probably the lower protein content is part of the reason for the lower calorie count,” she said. “And that is good, but it doesn’t really matter if you’re just going to be hungry again in an hour.”

Progresso is another of the most popular canned chicken noodle soup brands. “It is a classic and popular soup, but the sodium content brings down the rating,” Tills said. Half a can has 30% of the daily value.

“It’s better nutritionally than the traditional Campbell’s classic,” Tills said. The Well Yes! version is higher in protein and lower in sodium, but is still considered high-sodium with 28% of the daily value in half the can.

One downside: It’s high in sodium.

“It’s an option for those following a vegan diet who are otherwise healthy. However, the sodium content is still high, and I would not recommend to anyone at risk of hypertension, vegan or not,” Gonzalez said.

Eat the whole can of Annie’s Organic Chicken Noodle Soup and you’ll get nearly half of your daily value of sodium (eat just one serving and you’ll get a quarter) and it has less protein than higher-ranked brands, Tills said.

“Definitely not a meal replacement, but it would be great as a snack on a cold day,” she said. “A lot of the ingredients are from concentrate or purees, meaning that there’s not a lot of fiber in this and a fair amount of ingredients that are preservatives.” The whole can has about 1 gram of fiber.

“I would recommend this to most people,” Gonzalez said. “It’s probably not as expensive as other premium canned soups, but it’s still nutrient-dense.”

He highlighted the soup’s low sodium, high protein and 35% of the daily value for vitamin A. But Gonzalez also pointed out that the soup contains some processed ingredients, like modified corn starch and malic acid. Research shows that eating too many processed foods may be bad for our health.

“For processed foods in general, it is good practice to try to avoid ingredients that a regular consumer wouldn’t intuitively recognize,” he said.

The chicken noodle soup from Whole Foods’ store brand, 365 Everyday Value, “is an excellent source of protein, vitamins and minerals, especially vitamin A,” Gonzalez said. It contains 60% of your daily value of vitamin A. The sodium content is still on the high side, however, with more than 23% of your daily value per serving.

The nutritionists ranked Health Valley’s chicken noodle soup as the healthiest because of its low sodium content ― just 6% of the daily value per serving, which is “great for a canned soup,” Tills said. It’s also offers 20% of your daily value of vitamin A per serving.

Another plus: it’s made from mostly organic and recognizable ingredients like organic carrots, celery and dark meat chicken, Gonzalez said.

Goodbye, Green Bean Casserole. This Thanksgiving Side Is Coming For You.

This Overlooked Bean Is A Cheap, Protein-Packed Must-Have For Vegetarians

Those 'Yams' On Your Thanksgiving Table Probably Aren't Yams At All 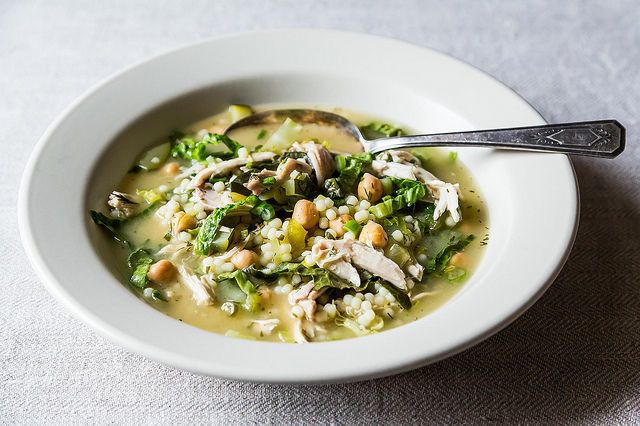