Deep-Fried Turkey
Health Grade: D
Let's talk turkey: Typically, in these recipes, the bird is fried in peanut oil, which is a good source of healthy fats but also high in calories (119 per Tbsp.). Peanut oil also has 22 percent more saturated fat than olive oil (which is what many of us brush on the bird when roasting). The turkey will absorb some of the oil despite the short cooking time. You're also probably not passing on that supercrispy skin, which is where most of the saturated fat in turkey hides, says Jackie Topol, RD, clinical dietician at New York-Presbyterian/Weill Cornell and culinary nutritionist.

Turkey Wrapped in Bacon
Health Grade: C-
Let's talk turkey: Obviously, a layer of bacon on your bird increases the calorie count and the fat content of the meal, and this is another method that all but guarantees you'll eat the turkey skin—because it's attached to that delicious bacon. If you're worried about the recently published study linking processed meats, including bacon, to a slightly higher risk of colon cancer though, keep in mind that regular consumption was the key factor contributing to increased risk. So, unless the bacon on your turkey is fulfilling your daily bacon quota, cancer risk shouldn't be a big concern.

Smoked Turkey
Health Grade: C+
Let's talk turkey: This method doesn't add calories, but it may expose you to carcinogenic compounds called HCAs (heterocyclic amines) and PAHs (polycyclic aromatic hydrocarbons), which are formed when meat is smoked. Just like with bacon, though, habitual consumption is the problem—the more smoked meats you consume, the higher your risk, explains nutritional epidemiologist Marjorie McCullough, ScD (doctor of science) of the American Cancer Society. There's no specific amount that's considered safe, but if you're a strictly-on-Thanksgiving smoked-meat eater, it's not something to stress about. Regular smoked-meat consumers may want to consider taking a break on Turkey Day, though.

Turkey Stuffed with Other Birds
Health Grade: B
Let's talk turkey: There are many ways to cook a turducken (they can be fried or bacon-wrapped or roasted, etc.), but the main problem here is portion size. "People tend to eat more because they want a little bit of every kind of meat," says Topol. Breaking down calorie and fat content bird-by-bird, 3 ounces of roasted turkey has 135 calories and 3.26 grams of fat; whereas roughly the same amount of chicken has 142 calories and 5.64 grams of fat and a similar portion of duck has 171 calories and 9.52 grams of fat.

Brined Turkey
Health Grade: A-
Let's talk turkey: The only minor con here is salt—frozen turkeys are often higher in sodium to start with because they're injected with saline to keep them juicy, says Topol, and the meat will also absorb some more salt from the brine itself (it's hard to say, for sure, how much).

Roasted Turkey
Health Grade: A
Let's talk turkey: An unbrined turkey roasted in its own juices (without butter added under the skin) is the most healthful option, especially if you take the skin off your portion to cut down on saturated fat. The calorie difference between the light and dark meat is minimal (22 calories less in the light variety of a roughly 3-ounce serving). Fat-wise, the dark meat has about 3.5 grams more calories per serving. 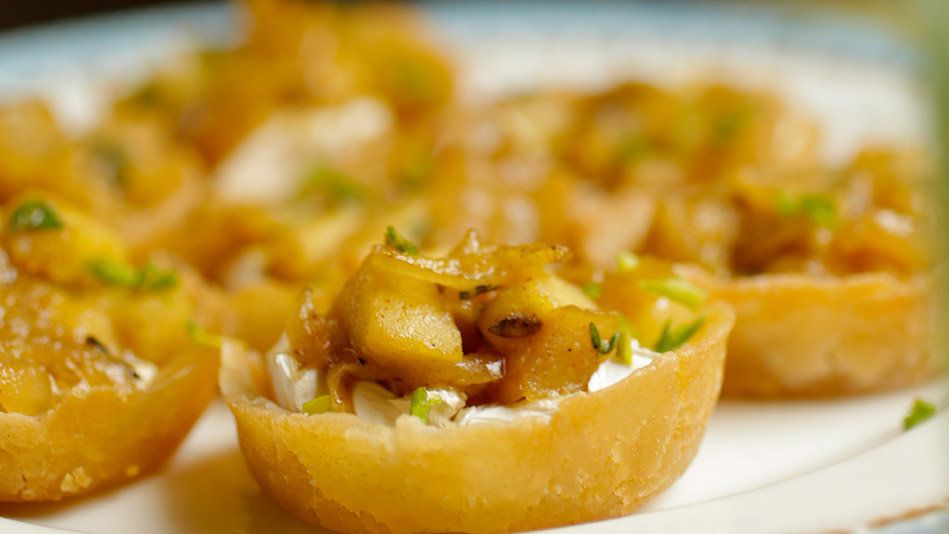 1 / 5
A Savory Apple Pie
These gorgeous handheld mini-tarts are the perfect indulgent bites, whether you're bookending the meal with apple pie or letting the tartlets star as the only fall-fruit-themed course of the day. Jessie Lagasse Swanson and Jilly Lagasse (daughters of famed chef Emeril) share the easy recipe in their new cookbook, <a href="http://www.amazon.com/Lagasse-Girls-Flavor-Taste---Gluten/dp/0738217875?tag=thehuffingtop-20" target="_blank"><em>The Lagasse Girls' Big Flavor, Bold Taste—and No Gluten!</em></a> You can make the pie crust yourself or buy it in the supermarket's refrigerated section. Either way, you fill each one with caramelized sweet onions, tart Granny Smiths and a small slice of creamy Brie. <strong>Get the recipe: <a href="http://www.oprah.com/food/Warm-Apple-and-Brie-Tartlets-Recipe" target="_blank">Warm Apple and Brie Tartlets</a> </strong>
Chris Granger