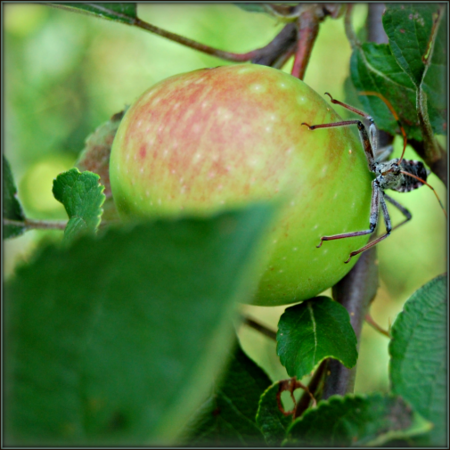 The ripening Winesap had a beautiful pinkish cast to its skin, a shine that promised good eating--and a long-legged, fierce-looking insect clinging to it. An assassin bug that could inflict a nasty, painful bite.

We were absolutely thrilled.

This year Jeff and I have sworn off using chemical sprays at our five-acre orchard in the Virginia mountains. We've been moving in this direction for several years but until now hadn't gotten up the nerve to go completely chemical-free.

Finding assassin bugs all over our apples made us whoop with joy--literally. These lanky, scary-looking creatures eat Japanese beetles, which last year caused serious damage to our trees.

In summers past we found it just too painful to watch hundreds of brightly colored beetles turn the leaves of our beloved heritage apple trees into skeletons. Last year we caved in and applied a pesticide that we knew would probably kill beneficial insects too. But this year we're applying neem oil, a natural substance that supposedly makes Japanese beetles throw up, along with a solution of tea made from stinging nettles to boost the trees' immune system.

Are our trees better off? The jury is still out, and will be for quite some time.

I should stress here that Jeff and I are hobby orchardists. We don't depend on income from our apples. In fact, the property is something of a money pit.

We've had our little part of the family orchard since 1997, and for most of that time it's been under the care of a skilled professional orchardist who applies as light a chemical spray as possible. Jeff and I love the idea of growing some of the heritage apples that have become increasingly rare. We've filled most of our land with varieties no one has ever heard of, like Magnum Bonum and Razor Russett. As our crop ripens in the fall, we host apple tastings for friends that, in our minds, rival anything offered by the wineries of California.

When we began grafting these vanishing varieties, though, it didn't occur to us that they might be rare for a reason: weak resistance to Southern pests and diseases.

Through the years, we've become increasingly uncomfortable as we've learned about the damage being done to honey bees and native insects by common orchard chemicals like fungicides. In 2014, the professional orchardist told us he could no longer tend the land for us. A nearby neighbor had raised concerns about the effects of the chemical sprays. We told him we understood and wished him well. And Jeff began reading everything he could find on non-chemical sprays.

This approach is incredibly labor intensive, which is especially difficult for us, since we live more than 300 miles away. Fallen apples must be picked up to cut down on apple coddling moths. Branches infected with fire blight must be carefully trimmed and taken out of the orchard--but only when the trees are absolutely dry. Moisture spreads the spores. Tree trunks and branches must be inspected for round-headed apple borers, which infested our Magnum Bonums this year. Jeff cut as many of the larvae out of the trunks as he could find, then packed the wounds with beneficial nematodes. 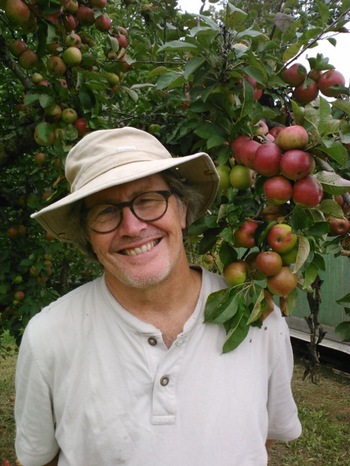 Time to thin the crop--by hand

The hardest part always comes in the heat of summer, as the pests multiply and fungi spread and the smorgasbord begins in earnest. It's wrenching to watch the bugs feed and the leaves develop the yellow and reddish circles known as frogeye, a symptom of black rot. It's painful to simply walk away and hope we've helped our trees build up the inner strength to survive.

We know many of the trees we've so lovingly grafted and tended for eight years may not make it. But that, as they say, is farming. Three years ago an entire row of baby Razor Russet trees was nearly decimated by an outbreak of 17-year locusts, which no chemical spray could have put down. When I first saw the tiny, scarred trunks, I broke into tears. My personal challenge, it seems, is to not fall too deeply in love with a bunch of trees, no matter how tasty their fruit.

And honestly, as conservationists we have to ask: Is it worth applying products like Sevin to sustain rare, fragile varieties of fruit? Or should we concentrate on the heartier varieties like Old Fashioned Winesap that seem more capable of warding off Southern pests and diseases on their own? If we're to do right by the natural system, the answer is obvious.

So we'll celebrate our small victories, like the presence of assassin bugs and other predatory insects like the wheel bug. We'll pick up fallen apples and spread wood chips beneath trees to encourage a healthy ecosystem.

If we find that our beloved heritage trees can't make it without chemicals, we'll shed our tears but keep the lid firmly on the bottle of Sevin. At least, I hope we will. Time will tell. And we'll enjoy what remains of our chemical-free harvest, be it small or large. 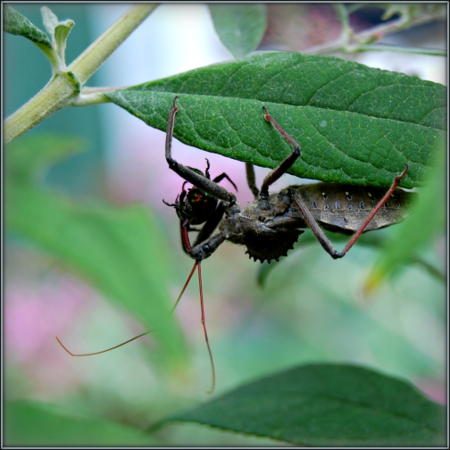 Wheelbug (a type of assassin bug) eating a Japanese beetle.