Aping a wild gorilla's eating habits could dramatically improve your health -- or may even add years to your life, by reducing your risk for killer diseases like diabetes, heart attack, stroke and dementia.

What's more, embracing your inner beast could help you slim down, without having to resort to a highly restrictive, low-calorie diet that leaves you ravenous and grumpy.

If that sounds hard to believe, I'd like to share the remarkable discoveries I've made during a 20-year quest for healing foods, culminating with my upcoming book, The Omni Diet: The Revolutionary 70% Plant + 30% Protein Plan to Lose Weight, Reverse Disease, Fight Inflammation, and Change Your Life Forever (St. Martin's Press).

Based on my family history (if you believe that genetics determine your destiny), I should be obese, diabetic, and afflicted by heart disease -- with high risk for dementia looming in the future. I've battled severe digestive issues, recurrent infections, and at age 23, a devastating diagnosis of thyroid cancer that had spread to my lymph nodes and returned three times, leading to multiple surgeries.

These experiences inspired me to become a warrior for my health -- and today, at age 44, I'm living proof of the unbelievable power of second chances and the miraculous transformation that occurs simply by changing the way you eat. 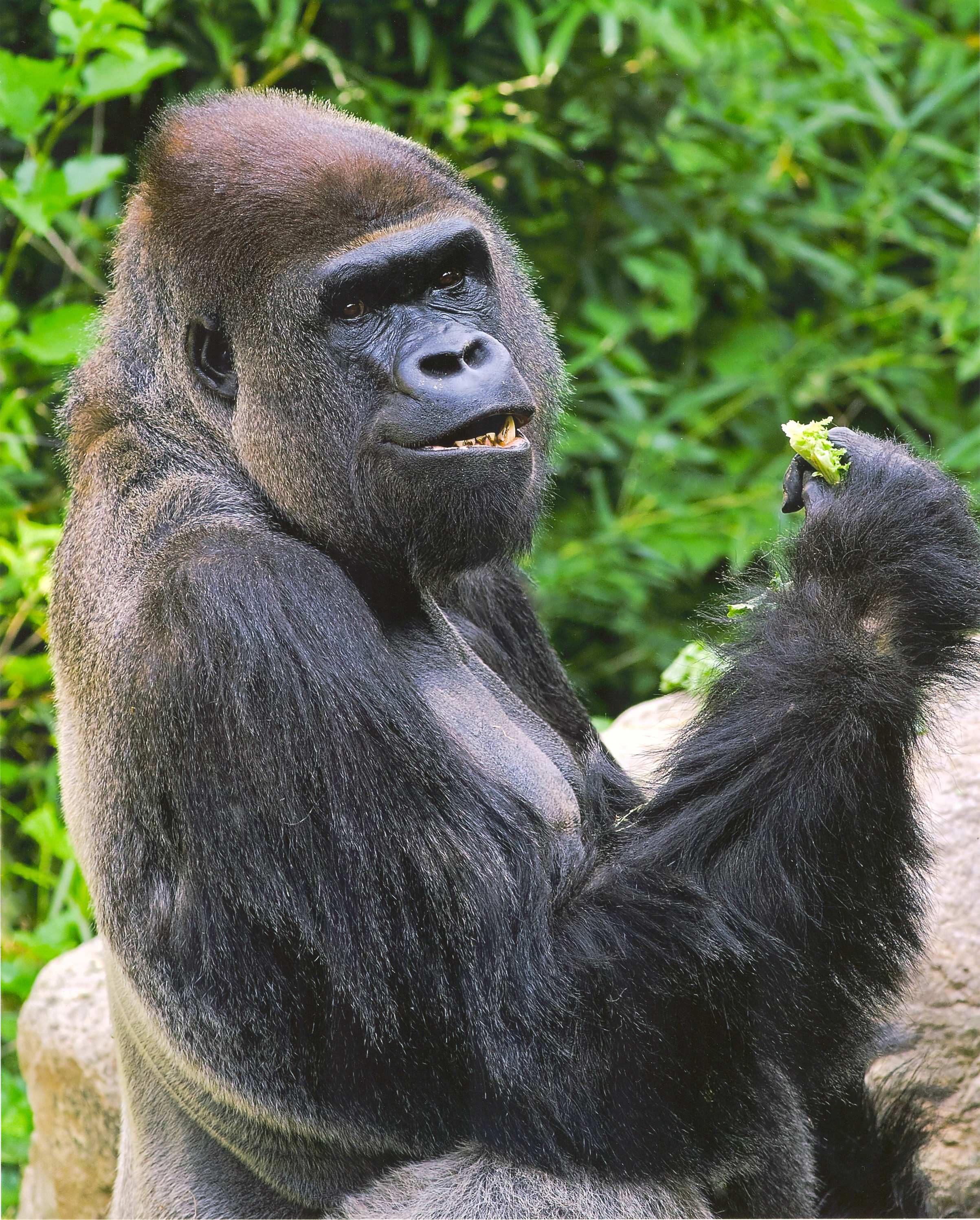 Your Diet Can Heal -- or Harm

Witness the amazing stories of Mokolo and Bebac, two male Western lowland gorillas who live at the Cleveland Metroparks Zoo (CMZ). In 2008, a cardiac ultrasound revealed that Bebac, then 24, was suffering from heart disease.

Then Mokolo, then 21, received the same diagnosis. Both apes were treated with human heart drugs, including beta blockers and ACE inhibitors, but seemed to on be a tragic trajectory, given this shocking fact: Incredibly, heart disease is the leading killer in Western lowland gorillas in North American zoos, according to Animal Planet.

Heart disease also ranks as the number one cause of death in American men and women, claiming 1 in 4 lives, according to the CDC.

Yet in the wild, apes don't develop obesity, diabetes or heart disease, a mystery that used to perplex veterinarians. Mokolo and Bebac's plight prompted scrutiny of their diet, I learned when I interviewed CMZ gorilla experts Kristen E. Lukas, Ph.D., curator of conservation and science and chair of the Gorilla Species Survival Plan at the Association of Zoos and Aquariums, and Elena Less, Ph.D., conservation medicine research fellow.

At the time, the two gorillas were relatively young -- in captivity, their breed can live up to 54 years -- but were overweight and had developed highly abnormal behavior, such as pulling out and eating their fur, along with repeatedly regurgitating and reingesting their food, habits that are not seen in the wild, according to Lukas and Less.

Like most zoo gorillas, Mokolo and Bebac were fed several servings of "nutritional cookies," made from grains, starch and sugar. In other words, they were eating processed, calorie-dense chow that was a far cry from their natural diet in the wild (with the good intention of ensuring that the gorillas received all the nutrition they required).

Their starchy, sugar-laden diet reminded me of my childhood meals. Growing up in a low-income, single-parent household, I lived on such foods as Cap'n Crunch, Pop-Tarts, chocolate milk, pan-fried steaks, and frozen pot pies -- with ice cream for dessert. My family members suffered from heart disease, obesity, diabetes, and cancer. In short, we were the picture of poor health. 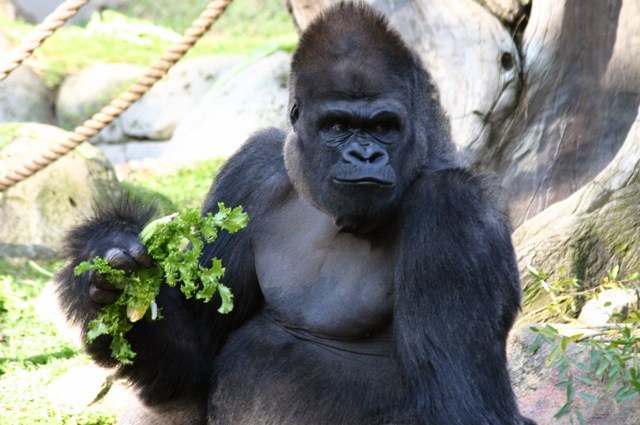 In the hope of halting the progression of their heart disease -- and saving their lives -- the pair of obese apes were switched to a new, healthier diet. Gone were the starchy, sugary cookies. Instead, they were fed wheelbarrows full of vegetables, including green beans, dandelion greens, romaine lettuce, and endive. In all, they were consuming 10 pounds of veggies a day.

Their high-fiber, low-sugar diet was supplemented with fruits and flaxseeds, the zoo reported, with the food scattered around their enclosure so they ended up spending up to 75 percent of their day foraging. Even though the gorillas actually took in twice as many calories with the new diet, after a year, the apes, who previously weighed about 450 pounds, dropped nearly 65 pounds apiece, according to ScienceDaily.

Along with significant improvements in their heart health, the two gorillas also stopped regurgitating and re-eating their food -- a habit that may have occurred, Lukas and Less theorized, because the processed zoo food upset their stomachs.

Or, more ominously, they may have spit up the cookies to taste the sugar again and again, suggesting that even gorillas can develop the sugar addiction that afflicts many Americans.

Gorillas may be more closely related to people than was previously believed, according to the first published study of the gorilla genome. Therefore, it makes sense that their wild diet is healthier for people than the standard American diet that left my family members diseased and even demented.

Don't worry -- I'm not recommending that you spend hours each day foraging for food or eating bugs (the main source of non-plant-based protein in the gorilla diet). Nor do you have to beat your chest. Instead, my Omni Diet is similar to what wild apes eat. Seventy percent of your food should come from whole plants -- such as freshly-prepared vegetables, vegetable juice, a little fruit, nuts, and seeds.

The other 30 percent should come from high-quality, lean protein. Gorillas don't eat grains! Yet these foods have become a cornerstone of the American diet, as rates of obesity and chronic disease skyrocket. Our hunter-gatherer ancestors ate wild grains sparingly, if at all. Today, genetic tinkering with the grains that abound in the American diet has been linked to a wide range of adverse effects, including the visceral belly fat that cardiologist William Davis, M.D. has dubbed "wheat belly." It's not surprising amid growing concern about the potential health hazards of genetically engineered foods -- including grains -- that more and more Americans are going gluten-free.

When I advise eating like a gorilla, people often make two obvious points. First of all, there are striking differences between humans and gorillas. And gorillas mainly eat a vegetarian diet. However, what's less well-known is that gorillas have a longer digestive tract than humans do, allowing them to more efficiently extract nutrients from plants, Lukas and Less told me.

With our shorter digestive tracts, people need a higher amount of protein and that's why my diet, which includes small amounts of wild fish and high-quality (naturally raised) lean meat, is designed for omnivores. Some key takeaways from our furry friends are these:

When I talked to Lukas and Less earlier this month, I was thrilled to hear that nearly five years after Mokolo and Bebac's heart disease diagnoses, both gorillas are not only still alive, but thriving. Like me, they're testimony to the miraculous power of a second chance -- and eating the right healing foods to restore health. Your genes and your history don't have to determine your destiny!

For more tips on how to select the healthiest foods, become a conscious shopper, and for delicious recipes you can make today, check out my website. While you're there, sign up for my newsletter by clicking on the link in the upper right hand corner, and I'll send you tips every week that will support your new healthy lifestyle.