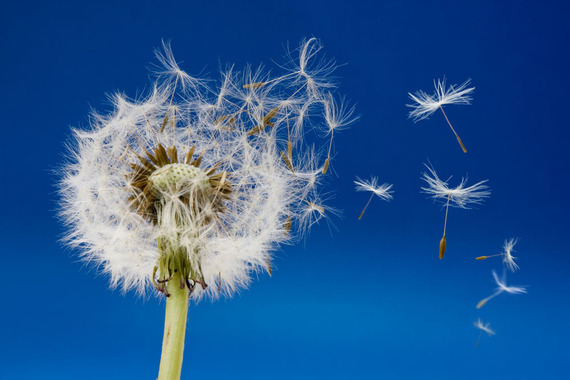 The truth is, since coming out as a lesbian, I miss my old community of faith and cherish them dearly. I recall the earnest faces of friends as we lifted one another up in prayer along with those we've never met -- someone's aunt, friend, co-worker, neighbor's son... I miss the immediate family feel of the co-mingled generations I knew sharing meals and celebrations together, or testimonies of God's faithfulness. And, sometimes, I miss their simplicity of faith via the narrow way, if one only "trust and obey."

But I'm not gonna lie. I feel my mind has grown, expanded, budded and bloomed since coming out into the light.

Consequently, I know I've drifted from the conservative Christian sphere. But I disagree with my evangelical friends who deem my drifting relative to "falling away." I see it more as one of those dandelion puffs... riding the breeze in the clear, blue skies above the shadows of rainclouds I once lived under. No more façades. No more hiding in fear.

Nevertheless, the many mental tapes of Sunday teachings remind me of the key versus applied to my liberation -- God has given me over to the lust of my flesh and, professing to be wise, I have become foolish. My penalty is due for such depravities. Like a weed, I deserve separation and isolation.

Some believe such discipline will keep us resigned or bring us back. Except, for many like me, once we've caught the view above the clouds, we often don't go back. Instead, after years of stifling haziness regarding our identity, such rebukes blow us further away.

We seek places where we can finally exhale and wholly exist, even if it means singing contemporary praise songs in gay-friendly coffee shops (or Broadway musicals at Uncle Charlie's piano bar). We join with a new kind of encouraging family -- ones we trust pray with us, instead of for us behind the scenes. We find new friends and build new communities that help us feel more valuable than a token gay friend (although, I'm always happy to oblige).

Still, my mind floats back to the various lifted hands praising God together across aisles of folding chairs or cushion-covered, hard pews. A part of me deeply wants to reconnect with them in such a way. The other part shudders at the thought of living in the gloomy fog cover again as an approved member of the Body.

If acceptance requires disavowing my sexual attraction, I will continually fail, just as any human would. And unlike gluttony, greed or gossip, the 70 times 7 of forgiveness for such repentance falls short, and self-reproach accompanies disgrace.

As we've been taught to believe "all or nothing," many choose nothing, abandoning the Church and their beliefs with disenchantment. But then, aborting the Church is more often a cover up from the hurt of religiosity than embitterment towards Jesus. Likewise, many of us cannot easily disavow our faith that has carried us through the years. Our spiritual hope is just as deep to the core as any other aspect of who we are and cannot be extracted anymore than our sexuality.

What are the options then?

One is comply with the conservative fold, steadfastly trying to convert one's sexuality through repression and restraint (classic Church history). However, not only are humans wired with distinctive desires, our brains are natural truth-tellers, which is why denial and duplicity are often short-lived. Eventually, admitting you are, indeed, attracted to the same sex or that you feel in the wrong body, and it isn't going away regardless of theology or interpretations, it's like dissipating mist over a mountainside. It doesn't take away the difficult terrain, but at least you can approach it now with more clarity.

Celibacy, as an honorable life choice, is tricky aside from Scripture's view (i.e. lust and adultery merely require thinking about it). The general problem with celibacy is the associated attitude: if it seems to work for some, it should be prescribed for all. This is despite the Church's understanding of celibacy as a higher calling, rather than mere human choice (else a future fiasco awaits). Nevertheless, it is broadly reckoned for the Christian LGBTQ. When they cannot endure such a lofty burden, the individual's spirituality is then judged as lacking. Yet the hoopla that this as the better way continues to convince the eager. Too many are left guilt-ridden, wondering at their weakness instead of recognizing the mire of man-imposed striving.

Many choose a hetero marriage, which makes sense bearing in mind the complex, human spectrum. But that's not typically why same-sex attracted people do so in the church. They are more often ashamed and afraid, hoping a straight life would someday trump their attractions and safely resolve their struggle. And let's not forget, the damaging, recurring results of disgrace include the unaware spouse who gets broadsided. So, I ask, is marriage a life of secrecy? Is there a supportive voice with others who identify, or will it hide behind marriage's veil?

Turns out, we were designed to live in the light. In fact, a healthy dose of daylight empowers growth and strength in humans, not just dandelions. Living in the light as authentic human beings has benefits as well. I could go on about the increased cortisol levels related to stress we've all felt when telling a lie, or more, trying to maintain it. Perhaps what needs emphasizing are the physical effects of sustained stress levels such as obesity and diabetes, gastrointestinal and cardiovascular complications and immune deficiencies.

Consider Vicky Beeching's story of a scar taking over her face. The physician submitted something might be causing the Christian music artist and theologian unusual stress. In the end, her key treatment for her autoimmune disease, linear scleroderma morphea, was disclosing her same-sex attraction to her Christian circle. While her musical career vanished, her scar disappeared as well; yet, her scar isn't often highlighted in the conservative domain. Rather, her story is parsed as just another Christian artist scandal as she advocates for gay Christians.

Despite our honesty, few believe us when we say we've prayed our whole life renouncing a major aspect of our self. We've confessed so many times we begin to question our sincerity anymore. We've been prayed over with exorcism intensities, paid thousands in therapy and counseling; we've even married with the ardor to "trust and obey." Indeed, we are some of the most fervently spiritual.

To no avail, should we claim Christ and our reality, we may still be condemned as inexcusable.

What else is left to do?

Come out and grow in the Light. Absorb its benefits for living like a wildflower. Discover hallowed ground where honesty and compassion flourish. And, should you find yourself lifted, reach across the aisle affirming, "I am your sister... your brother..." and hold on for the sake of others' blossoming too.

It is important to find the right support to talk to such as a local professional counselor, family therapist or national support groups such as Trevor Project, PFLAG or GLAAD, to name a few.

Believe Out Loud provides a list of many LGBTQ affirming churches by state.