The federal government was criticized for sweeping changes to the national student lunch program when it launched the effort to make school meals healthier in 2012 -- but new research shows that skepticism may be unwarranted.

There have been widely shared reports of students throwing their food in the trash and complaints that the new nutrition regulations in the Healthy, Hunger-Free Kids Act, which first lady Michelle Obama championed, cut portion sizes too dramatically. The criticism caused some pundits to question whether the changes were having their intended impact, arguing that many students were turning their backs on the program.

However, the University of Washington research, released Monday, presents more evidence to the contrary.

The study, published in the Journal of the American Medical Association Pediatrics, analyzed student meal selections at three middle schools and three high schools in an urban school district of Washington state.

The analysis compared the food students bought during the 16 months of school before the change in school lunch nutritional changes to the purchases made over a period of 15 months afterward. It found that the nutritional quality of the students’ 1.7 million meals -- specifically their calcium, vitamin C, vitamin A, iron, fiber and protein content -- increased 29 percent, while caloric content per gram decreased 13 percent due to the changes.

Additionally, the study, which the Robert Wood Johnson Foundation funded with additional support from the U.S. Department of Health and Human Services, did not find a statistically significant change in students’ school lunch participation as a result of the changes.

University of Washington health services professor Donna Johnson, the study’s lead author, believes the report shows that critics’ complaints about the program are not in line with what’s happening on the ground -- at least in the school district this analysis considered.

“We have new regulations and they have increased the nutritional quality of these meals,” Johnson told The Huffington Post. “Schools are able to do this and students continue to select these foods and show up for school lunch. It’s a good thing.”

Still, the study appears on the surface to contradict another analysis of the school lunch program changes that attracted an overwhelming amount of media attention last year.

That study, published in Public Health Reports in September and conducted by University of Vermont researchers, considered the purchasing and consumption patterns of students at two Northeastern elementary schools. It reported that while students were selecting more fruits and vegetables, their consumption of the healthier foods had dropped because a large amount of the produce was being thrown into the garbage. That research prompted The Washington Post to claim the national school lunch program was “in trouble.”

Johnson noted there were key differences between the Vermont study and hers -- most notably the difference in ages of participants and the Washington students’ access to a salad bar to choose their own produce rather than being given more limited, less exciting options like whole apples and oranges.

But she said the key takeaway is that how lunchroom staffs are meeting new guidelines matters nearly as much as whether they are in compliance.

“What that says to me is that the implementation is really important,” Johnson said. “We need to be thoughtful about how we meet the letter of the law and actually go beyond that to think about how fruits and vegetables are presented to students.”

The new research has limitations of its own, of course, as it only analyzed one school district in Washington and looked solely at student purchases and not consumption. But Johnson is confident, given the study’s large sample size and the length of time it covered, in the conclusions it’s drawn.

Johnson pointed to two other studies conducted over the past two years that reported, similarly to their analysis, that the new standards have resulted in students eating healthier meals at school.

And ultimately, Johnson said, the legislation is about helping America’s youth establish eating habits that will help them avoid diet-related health concerns. She pointed to a national poll of parents released in 2014 finding that 72 percent of respondents favored the new standards as evidence that the nation is on board with the changes. A second poll released last year reported similar findings.

“Why would we feed our children unhealthy foods? How can you make that argument?” Johnson said. “I think it gets caught up with a lot of the ongoing political dialogues about the role of government. But really, it’s about the health of our children and I think most people get it.” 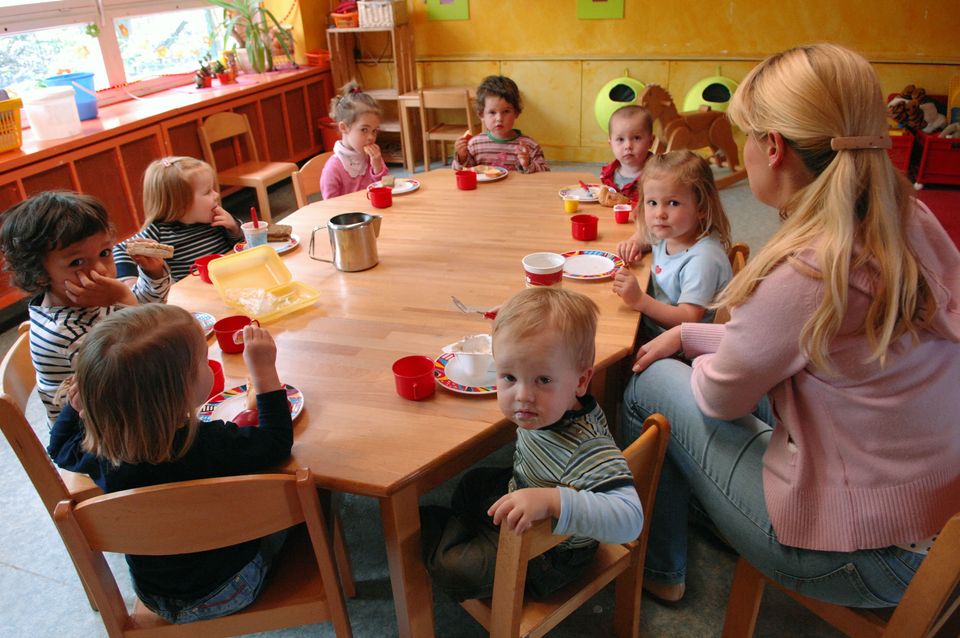 1 / 5
One In Five Kids Is Overweight By Age 6
<a href="http://www.cdc.gov/healthyyouth/obesity/facts.htm" target="_blank">Obese kids are more likely to also be obese as adults</a>, which <a href="http://www.letsmove.gov/sites/letsmove.gov/files/Let_s_Move_Child_Care_Fact_Sheet.pdf" target="_blank">puts them at risk</a> for heart disease, diabetes, and more adult health problems.
Alamy