Offering healthy foods in the school lunchroom is just a first step. How to get kids to actually choose the better options and eat them is where professor Brian Wansink, director of the Cornell University Food and Brand Lab, comes in.

By changing how food is presented to schoolchildren, Wansink argues, you can change the eating choices they make -- without the nagging. He details his research findings and suggestions in a new book Slim by Design, published last month.

The aim, he told The Huffington Post, is to "set the lunchroom up so kids end up taking healthy stuff" themselves.

Wansink launched the Smarter Lunchrooms Movement in 2009, based on his team's initial research into students' eating habits. In 2010, he and professor David Just partnered to create the Cornell Center for Behavioral Economics in Child Nutrition Program, which advances that research. (See Wansink and Just in a short video above of a before-and-after Smarter Lunchroom makeover.)

In Slim by Design, Wansink does not focus on changing school menus. His theories are all about changing kids' perceptions of that food. "How much you eat, how full you feel, and how much you like it are partly psychological," he writes.

Many of his recommendations aim to make healthy choices more accessible than unhealthy options. For example, Wansink suggests putting cartons of nonfat white milk in the front of the cooler, with chocolate and strawberry milk in the back. Children should be able to pick up fruit in multiple places.

Another suggestion is to make lunchrooms "cool." Naming the lunchroom after a mascot, putting logos on walls and trays, and adding more bright colors will help students get excited about eating their lunch.

Wansink has also designed smarter lunch trays. Fruit and vegetable compartments are deeper and moved to the front of the tray, so that those foods can't be overlooked, the portions are bigger and the vegetables stay warmer longer. The entree compartment is shallower, which makes students feel like they're getting more than they actually are.

Research found that when students ate out of Wansink's tray prototypes, they not only consumed more vegetables but also rated them as tastier.

But the cleverest part of Wansink's tray is the drink compartment. It is designed to fit a square milk carton, with a hole in the middle so that smaller, round drink containers will fall through. The idea is that kids will be subtly discouraged from picking sugary drinks that are harder to carry on the trays. 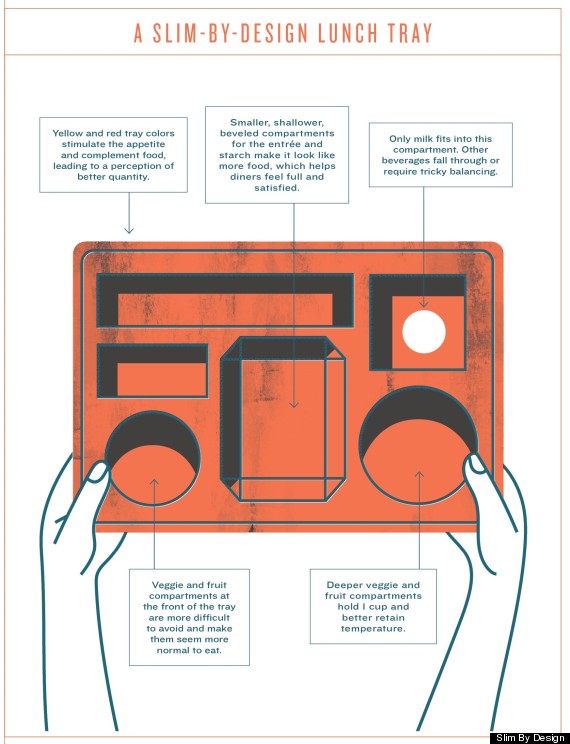 Beyond the improved tray, there are other ways to encourage kids to make healthy choices. Putting fruit in a nice bowl or basket under good lighting, Wansink found, increased fruit sales at one school by 103 percent. Playful names can increase food's appeal: After one school renamed one entree the "Big Bad Bean Burrito," it sold out for the first time ever.

Wansink has created a 100-point Smarter Lunchroom scorecard. Most schools score between 25 and 35 points on their initial self-assessment, he told HuffPost, but within two months that score rises by 10 to 15 points.

The Smarter Lunchroom strategies have been so effective that the U.S. Department of Agriculture, which has sought to improve school lunches for 20 years, is now using them as part of its Healthier U.S. Schools Challenge. To obtain a USDA Team Nutrition training grant, schools are required to fill out the self-assessment scorecard (it doesn't matter how well they score, just as long as they fill it out to show awareness). Team Nutrition provides training and assistance for schools and child caretakers and awards grants to schools that implement USDA requirements and suggestions on school meals.

Here are some of our favorite Smarter Lunchroom suggestions, taken from the self-assessment scorecard:

School Lunches Around The World