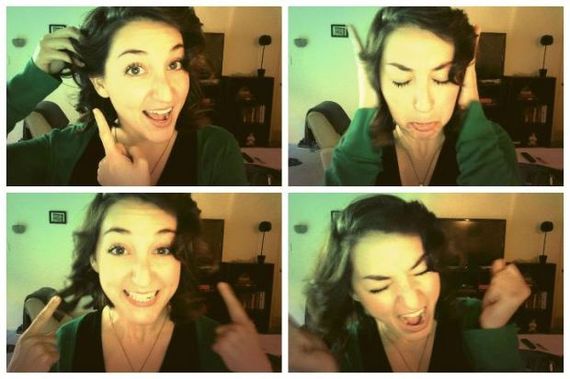 After an adverse reaction to medication left me with Tinnitus (a constant ringing in your ears, it's lovely), I was put through a series of hearing tests. I sat in a vault-like room listening for beeps of varying volume. Afterward, they told me that I had high frequency hearing loss, and I'd be a great candidate for hearing aids.

Big, clunky, ugly pieces of wannabe skin-color machinery, shoved into wax-filled hairy old-man-ears... I don't need them. It's just that I have to read lips in loud places and my close friends know to stand on my left side because my right ear is worse than my left and sometimes I miss important things in meetings and on phone calls.

I walk into the hearing aid place my insurance company recommended (but doesn't cover, of course -- yay Kaiser!). The audiologist brings me into his office and runs through what feels like his usual spiel. After tapping his fingers on the keyboard for a minute, he hands me a pair of ear buds that are wired to his computer.

"You'll hear static for a moment before they turn on."

I put them in, and hear the static like he says. Then the static stops, and suddenly, there are... sounds.

Everywhere. Everything has a sound. It's like I can see the space around me, but with my ears. I hear the hum of his computer, the sound of his pants on his office chair as he shifts his position to look closer at the screen.

My eyes start uncontrollably watering as I realize how much I have to experience and hear. I shuffle my feet on the floor, taking so much joy in hearing the synthetic threads against my shoes. I kick my purse with my foot and hear everything inside move. It's like a drug, and I am greedy for it.

He tells me that I can take them off... but I stall, asking him questions so I can keep them in a bit longer.

"Where are these manufactured? How long have you been an audiologist? Have you ever been to the restaurant next door?"

We go over pricing (average being $4K+) and I leave his office seeking out a second opinion.

I did some Googling and landed on the website of Dr. Stephen Kirsch, an audiologist just up the street. His website said that he and his wife spend time outfitting children in Africa with hearing aids. Um, yes. I like him already. I call and make an appointment.

He welcomes me into his office and I'm feeling anxious, but trying to play it cool, wondering when I'll get to put hearing aids in my ears again. We start talking about my hearing loss, and then he asks me if I want to try some out. "YES, YES I DO."

His aren't wired to a computer like the other guy's. They're just regular hearing aids, and they're TINY. Like, I could accidentally swallow them in a salad and not notice, tiny. 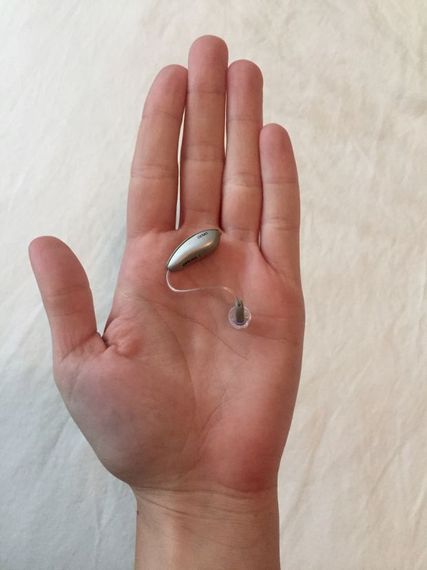 He helps me put them in, and my eyes widen, searching the room for something new to hear.

Just like the other guy, he tells me I'll hear static for a minute while he adjusts things. Then, like before, my ears switch on. I light up, and this time, so does the other person in the room. He taps his fingers on his desk; he picks up a piece of paper and shakes it around, indulging my greediness for sound.

He tells me some things to expect. How I'll get used to hearing my own voice, it might be overwhelming in loud places, and... I'll be able to accurately represent myself. I hadn't thought of that last one, and I didn't fully understand it at the time, but I would come to.

He lets me take a pair to test drive. I get in my car, smiling like an excited dog following new smells and I turn on some music. A Mumford and Sons song comes on and I have what can only be described as an eargasm. The violin. I can hear the violin! I didn't even know there was fucking violin in this song!

I have high frequency hearing loss, so the higher pitch the sound, the less I can hear it. Harmonies became richer. I could hear the strings of the guitar. The fibers. Then some less exciting realizations came to me - like how those whispers probably weren't that quiet, those sex noises must have been real loud, and those toots may not have been silent.

When I was younger, doctors said that I had premature hearing loss, but that sentence was never finished with, "and hearing aids could make a significant improvement on your life."

So, my family and friends continued thinking of me as a "bad listener." Which, I guess, technically, I was -- but being called a bad listener hit me in the heart. To me, they were calling me self-absorbed and disinterested.

I can be an asshole, same as the next person, but most of the time I was trying. However, just trying to hear can make you seem like a jerk. Your face scrunches up, your eyebrows furrow, your neck cranes out -- body language that reads negatively. So, after awhile, I stopped asking people to repeat themselves as often.

"What? Oh... you already repeated it twice, and if I ask once more, you'll scream-repeat it at me angrily? Oh, um, yeah, no, I totally heard you."

I asked Dr. Kirsch if I could pick his brain for this article and he enthusiastically agreed. While chatting, I told him about being called a bad listener. He paused, looked me in the eye and said, "But you're a great listener." My heart swelled.

He continued, "You are a great listener largely because you and others with hearing loss pay such close attention to body language and facial expressions which tell more than the words on their own."

He told me about a lawyer he worked with. The lawyer worried that if people noticed his hearing aids in the courtroom, it would be perceived as a sign of weakness and inspire doubt.

Unfortunately, because of all the stigma, a lot of people who could use hearing aids don't get them. As few as 1 in 5 people who have hearing loss actually do something about it.

My first week with hearing aids, I wore them to a beach house with some friends. They were all very happy for me, but I kept hearing this static. Something must be wrong with the hearing aids, I thought.

"There! Did anyone hear that?!"

Then my friend Sally goes, "Wait a second. Do you hear it right... now?"

"Sarah," she says, "those are waves. You're hearing the ocean."

Later, I had a meeting with this guy. I had my hearing aids turned up so I wouldn't miss anything, so they were even more susceptible to feedback. I hugged him goodbye, his ear covered mine, and my hearing aid made a high-pitched noise (like when a microphone gets in front of a speaker). The guy pulled back and looked at me weird.

I thought it was hilarious.

During our chat, I jokingly ask Dr. Kirsch when I should tell a date that I have hearing aids. He sweetly says that I should tell them around the time we start to really care for each other. That's great advice. However, I'll probably wait until we start getting physical and then my hearing aids will either fall out and land in weird places or start blasting audible feedback. Ta-da!

As un-sexy as they may be at times, and even though my hearing loss isn't as bad as most, hearing aids have changed my life. I believe that shamelessly showing your vulnerabilities can make you an even more likable person. Living honestly inspires others to live honestly.

That's what Dr. Kirsch meant about being your authentic self. "You can't fully communicate who you are when you can't hear what people are saying to you. People won't listen if they feel like they aren't being heard."

You strain to hear someone speak, you miss important words -- and as entertaining your shriek may be at the time -- you're startled when you didn't hear a friend walk in the room. You're always on edge.

I hope this reaches people with hearing loss (I'm looking at you, dear friend in denial) and helps them in getting over the stigma and their hang-ups about looking old or handicapped; getting hearing aids can significantly improve your quality of life and how you communicate with the world. Also, if you want to stop being a pain in the ass to your loved ones, you'll look into it.

Originally published on xoJane and republished here with their permission.