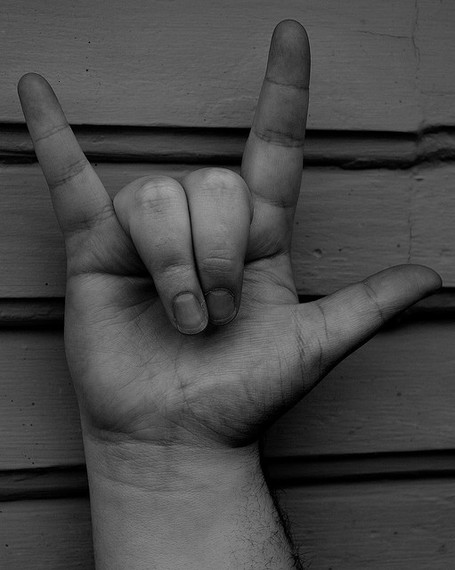 Often, people ask me "what is going on?" with deaf culture. More than ever, we are seeing deaf individuals on TV, in the news, and other mainstream sources.

For thousands of years, deaf people were silent members of society, sometimes denied basic rights simply because they could not hear. But with new communication technologies emerging each day, the world is finally getting a true glimpse into the complex and elaborate deaf cultures which quietly evolved over centuries.

As we all know, just because deaf people may not be able to hear or speak doesn't mean they have nothing to say! Throughout history, deaf people have existed, and they have wanted to engage with the world around them. Since hearing society was generally insensitive (remember, deaf people who couldn't speak were commonly called "dumb"), deaf people were desperate for others who they could relate to. Until the mid-1500s, the deaf population remained uneducated, disconnected, and largely ignored. Over time, official sign languages began emerging and people slowly started to understand communication as a human right.

If you ever played the "telephone" game as a child, you know how difficult it can be to relay a message through multiple sources. The telephone was a revolutionary invention for Americans, making it possible to stay connected with friends and family from a distance. But it was still decades before the deaf population was able to experience the joys of our networked world. If they wished to make a phone call, deaf individuals had to ask a hearing person to place the call and act as their interpreter. It was not convenient, and certainly not a good way to hold a private conversation.

Seeking a sense of community, deaf clubs began to assemble. Outside of the mainstream, away from the hearing world, deaf people began organizing their own social associations. Deaf clubs were among the very first institutions created by deaf people for deaf people. In private spaces, deaf people could express their hopes, discuss political issues, and share stories of oppression. Here, deaf folklore and jokes evolved. Aided by the use of sign language, Deaf culture became rich and nuanced, while deaf people grew empowered. By the 1940s, these social clubs could be found in nearly every major city across the United States.

In the 1960s, the teletype (TTY) was invented. TTY machines allowed messages to be typed then transmitted through the phone lines, where the message was received by another TTY device. If a deaf person wished to call a hearing person who did not have a TTY, then a relay service (TRS) could be used. TRS operators would receive the deaf person's TTY messages then read them out loud to the hearing entity. While this technology was a step in the right direction, it fell short in a few ways. Firstly, if the deaf individual could not read or write very well in English, this was not an effective method. Additionally, TRS call center employees were often hearing people with little knowledge about deaf culture or ASL. Because TRS operators were not always linguistically or culturally competent, it was very possible for messages to be miscommunicated, misinterpreted, and misunderstood. Although they certainly had their place, especially in deaf families, TTY was not an ideal solution.

It was not until the end of the 20th century that deaf Americans were impacted by the communication revolution. The invention of cell phones with text messaging finally offered deaf Americans the freedom that the telephone provided hearing people. When the Internet became a household utility, instant messaging and chat rooms allowed deaf people to make new connections. These easy-to-use methods were convenient not only for deaf people to communicate with one another, but they could now chat directly with hearing people. No more "telephone" game!

On the Internet, deaf people began to meet each other, explore deaf culture more deeply, and express themselves just like everyone else. As Internet speeds got faster, uploading and streaming videos became simple. Instead of typing out their stories in English, deaf people could now comfortably record video in ASL. By captioning or doing voice-overs, deaf video bloggers could reach both deaf and hearing audiences. For the first time, deaf stories could be told by deaf people directly to mainstream audiences without a third party. Now the whole world can finally see that deaf people are individuals with their own personalities.

The ability to have a long-distance conversation in sign language has been monumental. Using video chat, deaf people can now converse freely using ASL; whether they are around the block or across the ocean. Apps such as Skype and FaceTime empower deaf people to stay in contact and share their experiences. Video Relay Service (VRS) call centers-- staffed with certified ASL interpreters who understand deaf culture and ASL linguistics-- now provide a way for deaf people to make phone calls. Using VRS, deaf people can quickly communicate with hearing people, allowing them to participate more fully in areas of everyday life where they had normally been excluded. VRS is used in businesses across the country to provide deaf access, and empowers deaf employees to become engaged in the workplace.

This all takes us to our modern day -- with the widespread use of texting, instant messaging, and video chats. The internet has become the biggest deaf club in history! Deaf people are blogging, vlogging, and connecting instantly on any number of social networks. With the help of modern technology, deaf people have access to better education and communication than ever before. My deaf nieces are growing up in a world where they can call Aunt Lydia on FaceTime, and tell me about their day using their native language: ASL. My deaf sister and I can text gossip back and forth, or I can just share a photo of the leaves in Central Park with my mother. I know I am blessed to live in a time where I can be so connected to my deaf family and friends, because it wasn't always so easy.

When people ask me why they are suddenly seeing so much about deaf culture in the media, I can't help but feel a sense of pride. From deep roots of oppression, deaf Americans quietly cultivated a beautiful culture all their own. The Internet allows hearing society to access a wealth of deaf art, music, poetry, news, and advocacy information. Using the tools of the modern age, the deaf community is able to amplify its voice. Finally, the mainstream world is staring to listen.