One afternoon in the late '50s, a teenaged David Porter walks across the street from the grocery store he works at in Memphis and over to Satellite Records to see if, in addition to their country stuff, maybe they'd like to record some soul music. Jim Stewart, who, with his sister Estelle Axton, had just founded the Satellite label some months earlier, said they'd think about it; Estelle was immediately impressed, and before long Porter becomes Stax's first staff songwriter.

Knowing David, like I do, he no doubt had lofty, youthful hopes and dreams that day, but even he could not possibly have imagined where his dreams would take him and his remarkable talent. To this day, this rare soul of an accomplished, gentle man remains deeply grateful for where his early interest in music -- and singing in church -- have taken him, a journey that has enabled him to give something back to a community he himself helped establish some fifty years ago.

"At this stage in my life, I want to be sure I've given back in my own life as much as has been given to me. Music is the best way I know how to do that," he tells me. "If you're creative and you're limiting yourself, you're shortchanging the gift you've been given."

With the disappearance of Stax and, to a lesser extent, Motown, over the years soul music has given way to various styles of new, more popular... music. "It's unfortunate," says Porter. "Soul music always had an emotion, a feel, that reached inside you and grabbed your heart, shook your self, moved your feet. Much of today's music is void of those kinds of real, positive emotions -- and it's a great loss. So I just had to do something about it."

Within this Memphis community of soul music, Porter has seized the opportunity to insure its legacy and bring it full circle back to today's young musicians so that they and future generations can know it, understand and appreciate its legacy and its creators; play it, perform it, hear it, feel it, be moved by it -- and continue to move others! As perhaps only he could do. He's created The ConsortiumMMT (Memphis Music Town), a not-for-profit mentoring program to help aspiring musical talent realize their dreams.

By 1963, Porter is Isaac Hayes' songwriting partner. Incredibly successful by any measure -- he's credited with more than 1700 songs for a wide range of artists, including Aretha Franklin, James Brown, Otis Redding, ZZ Top, Isaac Hayes, Albert King, Celine Dion, Ted Nugent and many, many others. With catalogue sales of more than 300 million units to his credit, Porter was inducted into the Songwriters Hall of Fame in 2005. "Soul Man," "Hold on, I'm Comin'," "B-A-B-Y," "Your Good Thing (Is About to End)," Mariah Carey's "Dream Lover," Biggie Small's "Who Shot Ya," just so you know.

Porter was and is part of a close Stax family and its legacy, a family without boundaries. Like him, many of his colleagues came from the Memphis neighborhood, the projects, including Steve Cropper and Duck Dunn -- who were one half (the white half) of the fabulous Booker T. and the MGs, successful recording artists and Stax's house band. The other half (the black half) were Andrew Jackson Jr. and Booker T. Jones. A few years ago I pressed Crop to share his feelings about how ahead of the entire rest of the universe they were back then, with this integrated, groundbreaking kick-ass band. "Not an issue. Zero. Never thought about it. We were a band."

I first met David in 2007 when I was conducting on-camera website segments for Soulsville USA's Staxtacular, an annual fundraising event that supports their Stax Music Academy -- which provides music education to essentially at-risk youngsters. He's one of those instantly likable, generous people -- so much so that he readily agreed to reshoot our interview because the raucous crowd noise made it impossible to hear him on camera the first time around. 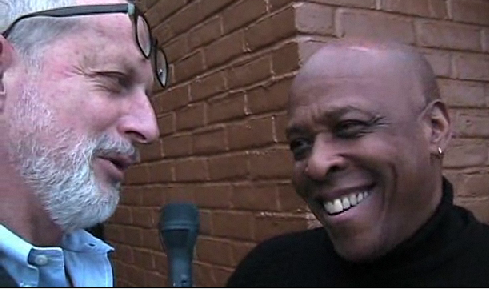 The author with David Porter, 2007, Memphis.

Back in Memphis a few weeks ago we sat and talked over a beverage at a local restaurant; he'd just come from a meeting with HBO at Soulsville USA (Stax) about a new series they're producing -- The Quarry -- which he's attached to as music consultant. One of those warm, instant reconnections, we caught up on each other's projects and love lives. There's an energy and radiance to this man I hadn't quite seen three years ago, the last time I saw him.

As he put it, "here I am, successful beyond anything I could have imagined, growing up in the Memphis projects. And I'm sitting on it. Playing golf. Fishing. And I've got this experience, this journey, this gift of music whose roots can only be explained in spiritual terms, if at all. And I don't want it to die."

And so, two years ago, Porter creates The ConsortiumMMT, in concert with the Memphis Chamber of Commerce. A not-for-profit (www.theconsortiummmt.org), its mission is to provide a structured, learning environment for aspiring recording artists, songwriters and record producers who are accomplished, but have even greater potential, to enrich and equip these young talents with proven tools in order to rekindle the fire that was and is soul music, in Memphis -- where it came from. And where David Porter put a torch to that first fire some 50 years ago.

"The Consortium is not developing talent for those who are just starting, but is looking for talent who are already good, and with some additional help, can become exceptional," said Porter. "Our goal is to help them become exceptional."

Embraced by the Greater Memphis Chamber of Commerce offices, which provides them with office and teaching space, at no cost, "the Consortium is a college for the creative class of music," as John Moore, President and CEO, Greater Memphis Chamber describes it. "I don't know of any other Chamber in the country that has this kind of incubator in it."

"The bottom line with what David is doing here is something really remarkable, ... he's well known in the industry and can open any door." Moore immediately embraced Porter's concept as a potential benefit to the city of Memphis itself. "Soul music is at the heart of Memphis' legacy and brand value, its melody, its feel, says Porter, "and these efforts will not only help give aspiring musicians greater opportunity, it should also reinvigorate this uniquely American music around the world, and return value to Memphis. It's an economic driver, a natural fit for the Chamber."

The accomplished stars Porter has attracted to help cultivate these aspiring artists include Maurice White, founder of Earth, Wind and Fire and a member of the Songwriter's Hall of Fame, along with Porter; Kirk Whalum, Chief Creative Officer, Stax Music Academy and multiple Grammy Award winner; Steve Jordan, Grammy-winning, multi-talented instrumentalist and composer who was the studio drummer for Saturday Night Live and Letterman; James Alexander, founder of the legendary Otis Redding band, the Bar-Kays, with five gold and a platinum albums, and many others -- including Porter himself.

"Our goal is to have a learning outcome, to have a curriculum process that serves that goal of giving them a structured, positive, powerful way," says Porter. 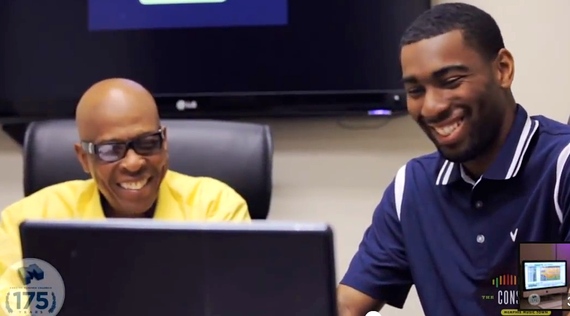 The Consortium has graduated some 160 musicians to date, at no cost to the participants. Fundraising is at the core of this not-for-profit organization, with contributions coming from interested foundations and individuals. Porter takes no salary for his efforts. On October 10, last year, The Consortium presented its first "Epitome of Soul" award to Stevie Wonder at a live event. It will be an annual award to help bring visibility and interest to the program. They've expanded their capacity through relationships with the University of Memphis School of Music and The Visible Christian School of Music, Memphis, which allows the exceptional participants to gain even further experience and learning, again at no cost to them.

The ConsortiumMMT is all about music, at first look, but in establishing it, David Porter has set an example for the rest of us, in music or otherwise. Give something back. Demonstrate your gratitude for where you are and where you came from and pass it on to the next generation.

Porter certainly is, "your music is no more, and no less, than who you are as a human being."