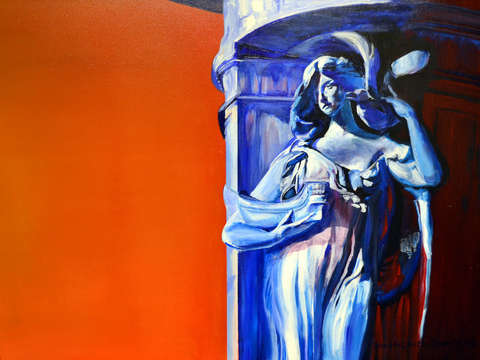 "The Sea," a painting by the author of sculptor Daniel Chester French's symbolic sculpture at the heart of Dupont Circle in Washington, D.C.--a city modeled on Paris

I've been a francophile to a certain degree as far back as I can remember. As with my decisions to pursue writing and painting, my decision to study French as far back as seventh grade was a consciously irrational, but necessary, decision. I knew Spanish was a far more practical language, that I would have 50 times the opportunity and need to understand that language as long as I remain in the United States than I would French--yet I chose French. I have no good reason other than I was drawn to it; it had to have been the French culture of art I'd seen depicted all my life in popular culture. My earliest association is Lucy Ricardo so desperate to wear authentic Parisian couture that she pranced proudly through a Paris cafe, swaddled in a potato sack.

Or maybe the French language was drawn to me; my first French teacher said I spoke with an accent so natural that I had to have been French in a past life. Probably not--and I never mastered the syntax or vocabulary, just a knack for the accent--but hearing that made me proud.

What is the mystique of Paris that gives to many of us an inexplicably deep-rooted affection for the city? Why did yesterday's attack on Paris feel so personally hurtful, even as terrorists violate other cities and towns across the globe every day? Paris is a first-world economic leader--but that's not it. As an American, I can't say objectively whether the September 11, 2001 attack on New York resonated with the rest of the world the way it did domestically. I think it did to an extent; New York is something like Paris, a younger sibling. But even New York isn't quite Paris. It's more of an economic powerhouse, perhaps, but culturally it's an heir to the Parisian spirit-mind, heart-courage.

Esprit, we are taught in French class, means "mind." A glance at the world reveals it is the source of our word "spirit," as well. English has divided mind and spirit into two disparate elements; in the French language, they are inextricably linked.

Courage, we are taught in English class, means "bravery." Knowing the basest level of French reveals at a glance that courage is rooted in coeur, the French word for "heart." We don't think about it, but our idiom of "taking heart" is a nuanced, less aggressive way of having courage. 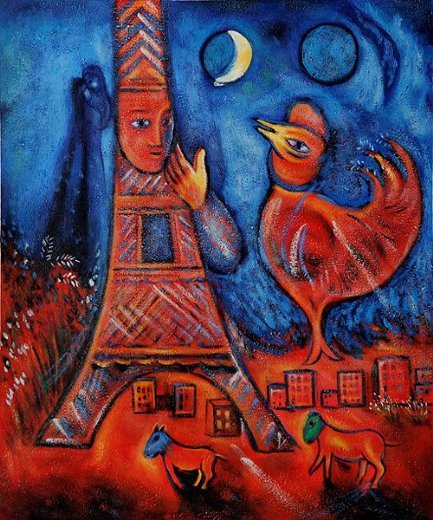 The French language is imbued with mind-body connections that, to me anyway, always have felt just a little more transcendent of the physical plane of existence than English does. During an enlightening 2000 summer abroad at the University of Cambridge, a plenary lecture on the history of the English language taught us young and naive students to think about our vocabulary and usage in a different way: English, the professor professed, is an organic combination of two languages. Because of its syntax, English is usually described as a derivation of German--but because of the United Kingdom's and Gaul's geographic proximity and resulting sociopolitical relationship, English is a melding of rational, concrete German and philosophical, abstract French languages. This professor told us to think about the meanings behind our words as we write, and to be grateful that our language, the English language, has dual capacities to be action-oriented and thoughtful, to be a balance of the maddeningly metaphorical French, whose nature creates terribly long, cumbersome, overly complex and qualified run-on sentences like this one (to which I am naturally prone), and German. The American version of English in particular has a Germanic habit of cutting out the unnecessary jibberjabber to the extent of excising letters that we deem to be a waste of space: the English adopted their colour closely from France's coleur. We Americans got rid of that u. It just wasn't serving any purpose--too un-American, and also un-German.

As a visual thinker, and an overthinker, and possibly as a Frenchman from a past life, language and colors meld in my mind, both as symbolic representations of our dual spiritual and material existence. While all of Picasso's enormously varied works don't resonate with me, his blue period paintings move me--all of them. As I found myself preferring to paint people in blue-and-white hues, I discovered that for me, blue is the color of the eternal soul, while red and hot colors are ephemeral physicality. I've found through my creative expression that a living person and a statue can be equally alive in painting, both more emotionally resonant (for me) when they are blue than when they are reproduced as we see them in life, in flesh tones and alabaster. And yet without the balances of red, there's only a sentimental longing without any of the tension that comes with the impermanence of physical life. 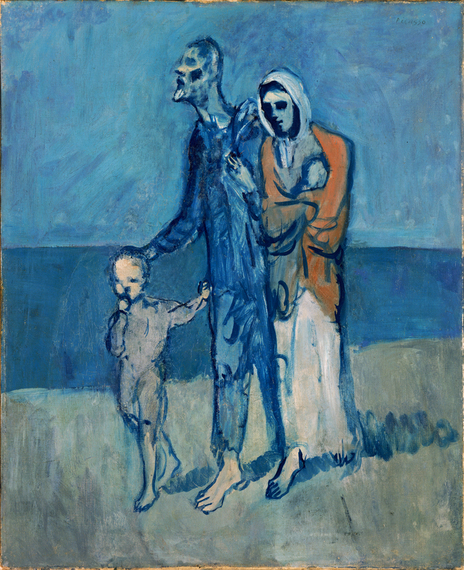 "Figures by the Sea" by Pablo Picasso, painted during the Spanish-native artist's "blue period," during which he spent much time immersed in Parisian culture--and contributing to it

My mind works in a particular way that I know doesn't resonate with everyone--but today, with so many open wounds puncturing the heart of the matriarchal Western city that gave the United States our greatest artistic symbol of liberty, I'm thinking about the language and colors of France, about the blue eternal soul, the scarlet flesh that reveals the temporary, painful state of being, and the white imposes itself between the two as necessary breathing room between the red and blue states of being. This blue, white, and red tricolor of the French, like the French language itself and so much of the art Paris offers to the world as a reminder to focus as much on spirit and thought as we do on practical commerce, represents our lives so well that Britain and its English-speaking colonies really never had to think about the colors of our standards: blue, white, and red resonate with humanity.

I give myself permission to ramble here in an admittedly unfocused moyen because I was always taught (in English classes, and sometimes even in French classes) that rambling metaphorical indulgence is a vulnerability of the French that is alternately reviled and celebrated. When given liberty, you take liberties to express yourself.

I've only been to Paris once, but I love Paris. Many who've never been there love this important city, whose heart, coeur, gives us courage. An attack on Paris is an attack on the Western world, and a painful one. It reminds us that this eternal city, who is blanketed and evened out by each evening's light, isn't eternal, not really, except that maybe the heart of Paris--the metaphorical one--is. As long as humanity exists, so will Paris, whether as it stands today or as she without question will live on in fables. Paris is a life force of her own, as vulnerable as any living creature, but eternal in her own particular way. Would-be terrorists should take note that Paris can be attacked, but she won't be destroyed--not ever--because Paris is as close to the human heart and mind as any city ever could be. She will recover, and by choosing to attack her, the grande dame of all of Western culture, terrorists only have exposed their own smallness, their insignificance as blips in the history of humanity. The mind-body connection, the blue esprit and cardinal coeur bridged by an expanse of pure white, is too strong. Paris will recover, a gracious goddess whose hardships always have and always will yield generous gifts for the living generations to come.