An Arrow to the Heart: A Commentary on the Heart Sutra

Let's say right off: you don't have to be a Buddhist to read this book. In fact, you don't need to be attached to a religion of any kind. But if you're the least bit interested in some of the more profound mysteries of the life of the mind, you'll find a great deal of guidance and inspiration in its pages. 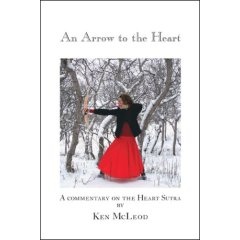 That said, let it be added that as a student of Buddhist teachings myself, I have struggled mightily with The Heart Sutra. It is one of the key texts in the entire canon--the one that serves up this eternally enigmatic gem:

You'll be forgiven if your response to these words is a befuddled "Huh?" As McLeod is quick to point out, that's a perfectly normal first reaction. Many students much further along the path than I have occasion to mutter much the same as they progress through this poetic and mystifying text. I applied myself valiantly to the recent Red Pine translation and commentary, The Heart Sutra (2004.) Red Pine aptly calls the sutra "Buddhism in a nutshell," and "a work of art as much as religion." His book is a meticulous reading of the text based on years of study and sheds much light on the subtleties of its meaning.

But it wasn't until I picked up McLeod's book that I began to "get it." What a relief! I didn't have to "understand" the sutra after all--at least not in the purely intellectual sense. Having read McLeod's earlier book, "Wake Up to Your Life," for review in the Los Angeles Times, I was expecting something different. To put that earlier work to its intended use required weeks of reading--along with hours of meditation, exercise and practice. An in-depth practitioner's guide to the teachings of Tibetan Mahayana Buddhism adapted to the Western mind, it's an immensely demanding--and immensely rewarding--read, an intricate map to the liberation of the mind from those reactive patterns that tend to dominate our lives without our realizing it.

If Wake Up was epic in its scope, this Arrow is its potent lyrical counterpart. Like a good poem, it chooses not to explicate but rather to evoke, arouse, suggest, inspire. It shines its light into surprising corners of the reader's own imagination, allowing the words of the sutra to maintain their mystery even as it aims the arrow to its heart. McLeod's arrow flies, however, not as arrows customarily do, in a straight line, but along its own mysterious, often errant paths--and remains always on target nonetheless. "By indirections," as Polonius said in Hamlet, we "find directions out."

McLeod's strategy is to feel for the cracks, as it were, in the sutra's surfaces and deftly open them up for readers to experience for themselves. To this end, he "riffs"--his term--on each part of the text, line by line, sometimes word by word, first with a short, image-based poem, then with a prose passage, and finally, on a facing page, with illuminating "notes," teasing out meaning as he goes. Quotations are scattered liberally throughout, from sources as varied as Lao Tzu and Leonard Cohen, Shakespeare, Lewis Carroll, T.S. Eliot and Wallace Stevens, Ludwig Wittgenstein and Bruce Springsteen. Their effect is not only to weave a rich tapestry of multiple associations, but also to create a broad cultural and temporal context in which the words of the ancient text begin to resonate throughout history and in our present world.

McLeod further challenges his reader with unanswered--often unanswerable--questions, Zen koans, pithy stories and parables, and scraps of ancient wisdom culled from a wide variety of philosophical and religious sources. It's a strategy that could easily become heavy and sententious, but McLeod juggles it all with a light hand and a spirit of unpretentious playfulness that make his book a lot of fun to read. He manages to make a pleasure--and experiential sense--out of the contemplation of such complex Buddhist notions as emptiness, groundlessness, self versus not-self, "reality" and delusion.

Readers will feel invited, as I did, in these pages. The generous white space that surrounds the printed text works as a silence in which the reader's mind contributes its own spontaneous riffs, spinning off from McLeod's provocative suggestions into endless projections and associations of its own invention. At each step along the way, too, a quick, light-hearted sketch by Dick Allen enlivens the words with a touch of insightful humor--adding a welcome smile to the more serious work at hand.

Like Wake Up to Your Life, An Arrow to the Heart is not a book to be read in linear fashion, page by page until you reach the end. It's a book to be savored, as its author suggests, "a page or two at a time," as one might read a volume of poetry. It will surely delight those readers who allow themselves to be led into its dance of language, image, and idea--and it will surely shed more light on the Heart Sutra than many a more academic text.