A few weeks ago, 3-year-old Brycen Principe asked his mom why people wear snowsuits in the winter. 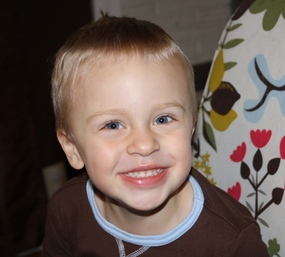 Jessica's answer only fueled his curiosity. More questions followed, faster than Jessica could keep up with as she was busy getting the family ready for the day.

"Mommy!" Brycen said in a demanding tone. "I have asked you three times already. If you don't answer my question, you are going to your room!"

Jessica laughed as she shared this story of her spunky son, the little boy who is "so full of life, full of energy, so lovable and just so fun." And, in his first few hours of life, was so, so sick.

Brycen had a congenital heart defect, a mouthful of a term that simply means he was born with a heart problem.

This week, as part of American Heart Month, we are drawing more attention to congenital heart defects. From Feb. 7-14, we commemorate Congenital Heart Defects Awareness Week, offering a wonderful platform to discuss the subject and the way state lawmakers can help.

The American Heart Association is among those urging states to pass a law requiring that all newborns undergo pulse-oximeter screening before they are released from the hospital. Again, that's a mouthful with an easy explanation.

A pulse-oximeter device is simply a light that shines through the skin to measure the percentage of oxygen in the blood. The goal is 100 percent. The lower the number, the more likely there's a problem. This test doesn't say what the problem is, but it can be a crucial indicator encouraging doctors to dig deeper. The test also is painless, easy to give and cheap, which is why it is encouraging that over half the states already have passed pulse-ox laws and we are hopeful that all other states will follow suit and quickly enact similar lifesaving policies.

New Hampshire -- where Brycen lives -- is among the states where pulse-ox is the law, but it wasn't back when he was born. The Principes were fortunate that a nurse in the maternity ward noticed his lips were turning blue, the telltale sign of a lack of oxygen in his body. The nurse then strapped a pulse ox around one of his feet, beginning the chain of events that led to a frightening diagnosis.

The two main arteries that carry blood away from Brycen's heart were connected the wrong way. It's a condition called Transposition of the Great Arteries, and it can only be fixed through surgery. He was put on an oxygen-pumping ventilator and transported to Children's Hospital in Boston, where he underwent an operation to try stabilizing his health, then another to repair the arteries.

"When the doctor told us Brycen had a congenital heart defect, I had no idea what that meant," Jessica said. "It was so scary, so overwhelming. Now I've learned how common they are and I can't believe it was never mentioned at any of my prenatal appointments."

These days, surgery scars are the only clue of Brycen's congenital heart defect. While his arteries are slightly narrowed and his vessels are weaker than that of most 3-year-olds, he has no limitations. His parents make sure he follows a healthy diet and gets plenty of physical activity - things everyone should strive for anyway -- and he's examined by a cardiologist every year just to be safe. 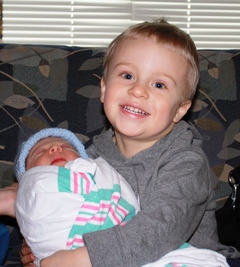 Jessica and her husband T.J. -- a firefighter who became trained as a CPR instructor after Brycen was born -- will never forget those harrowing first few days of Brycen's life, but they also try not to dwell on it. Alas, Jessica recently got a jolting reminder when a picture accidentally fell out of his baby book.

The photo was taken right before Brycen was hooked up to the ventilator for the critical-care ambulance trip to Boston. It wasn't exactly a moment worthy of capturing, except that nurses realized there was a chance of it being the last picture the three of them ever took together.

"It was completely overwhelming to think that was my baby, seeing him so sick and clinging to life," she said.

Once Jessica regained her composure, she went to Brycen and -- as she often does -- showered him in affection. He got a long, tight hug and heard how much Mommy loves him.