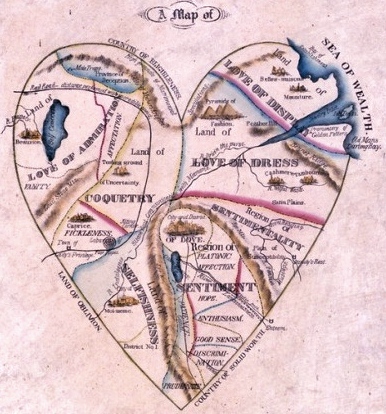 The journey promises to reveal to you the "internal communications and the facilities and dangers to Travelers" therein. Guys, apologies for not publishing a "Map of a Man's Heart," but trust me, you'll get a better laugh from this one.

Let's begin our travels with the upper right atrium of the woman's heart (upper left on map) --which according to the cartologist A. Lady (pseudonym, don't you think?) lies the Country of Eligibleness, and within it, the cliffside Land of Love of Admiration ( & Vanity) as well as the "High grounds of Matrimonial," camouflaged by the sheer drop into Land of Coquetry where one encounters "Male Traps: Province of Deception," "Affectation," and "Valley of Mother's Artifice."

This courtship region of the heart may be traversed quickly via the "Distance preformed with incredible speed" Railway, which passes by the Lake of Self Concern, the Beauxton Estate, Load Stone Mountains, Tenting Ground of Uncertainty, Caprice & Fickleness.

Imagine! All of this topography just a stone's throw from the Town of Lady's Privilege and Labyrinth of Fair Hopes.

The lower right ventricle (lower left of map) -- which withstands the greatest biological pressure -- is identified as the Land of Oblivion -- (uh-oh) treacherous terrain that may be crossed via the River of Indulgence on the steamboat Moimeme, which passes through the city of the same name in The Land of Selfishness.

Prudence is located at the bottommost tip of the heart -- its Tierra del Fuego/Strait of Magellan. The winds and currents are unpredictable, narrowness of passage harrowing.

One must, of course, travel the upper reaches of the heart's left atrium (top right of map) before capturing the prize of love.

The first obstacle? The Sea of Wealth, whose Bay of Establishment, Jewelry Inlet, Isle of Tears, Promontory of Golden Fetters and Old Man's Daring Bay pose threatening approaches. Safely ashore, one finds the Land of Love of Display, noted for is Belles-maisons and Mavoiture.

Beware the region of Platonic Affection. Unfortunately (and wouldn't you know it?) this region of the woman's heart is surrounded by the Ego Mountain Range -- a blind canyon resembling the Great Wall of China. There the intrepid traveler may find the River of Lasciviousness, River of Pensive Musings, Plain of Susceptibility, Novel Reading, and Dandy's Rest.

Reaching the left ventricle of a woman's heart (lower right of map) -- the heart's Atlantic shores -- one discovers the County of Solid Worth. ("Being with you hikes my pulse by several basis points." #fedvalentines)

But deep within the woman's heart -- let's say somewhere around the aorta -- one discovers Good Sense, Discrimination, Enthusiasm, Hope, Sentiment (Region of Sentimentality), the Lake of Constancy, the Canal of Patience and, ultimately, the City, District, and Palace of Love.

May all your journeys end there. See you tomorrow.

"At the present day, I swear to thee, that there are Women in the World of such excellence, that I have more envy of the life which they lead in secret than of all the Sciences which the Ancients taught in public." -- Antonie de Guevara, 16th Century Spanish Franciscan Monk

The Junior's Cheesecake Recipe That Chuck Schumer Spent $8,600 On