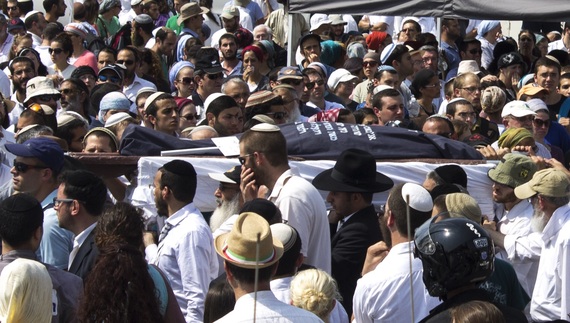 Photo Credit: Reemon Silverman, Tazpit News Agency / Funeral of murdered parents, Eitam and Naama Henkin in Jerusalem on Friday, October 2. Following the horrifying terror attack that took the lives of two parents from the Neria community on Thursday night, thousands of people came to pay their respects to the murdered couple, Naama, 30, and Eitam Henkin, 31, who were buried on Friday morning, October 2 in Jerusalem. Their nine-year-old son, Matan, in between tears, struggled to recite the mourner's Kaddish prayer for his parents.

Matan and his siblings, Nitzan, age 7, Netta, age 4, and four-month-old baby Itamar, witnessed the gunning down of their parents as they were driving near the Palestinian village of Beit Furik last night near the Itamar and Elon Moreh communities in Samaria. The gunshots were fired from a moving Palestinian vehicle, and the terrorists still remain at large as of Friday.

"You should be eulogizing me and not the opposite, mother to her son," said Rabbanit Chana Henkin who made aliyah with her husband Rabbi Yehuda Henkin from the United States during the 1970s.

The grieving mother spoke of the appreciation she had of her son's character and accomplishments in the world of Torah study and values. Her son, who was a rabbi, had recently completed his second book on Jewish law related to the Sabbath and was a prolific writer of Jewish history and Jewish law.

"You never complained about anything," said Rabbanit Henkin, who herself is the founder and dean of the Nishmat Institute in Jerusalem for women, where her son also taught. "Both you and Naama shared a great love between you."

"The children were saved by a miracle," continued Rabbanit Henkin. "The 4-month-old baby will not remember his mother's love, but I hope the rest of her children do. She was a very special and fragile woman; a wonderful mother."

Thousands of people came to the couple's funeral including Israeli President Reuven Rivlin, Jerusalem Mayor Nir Barkat, Ashkenazi Chief Rabbi David Lau, Sephardi Chief Rabbi Yitzhak Yosef and fellow residents from the Neriya community in the Binyamin region where the Heinkin family lived. President Rivlin recounted how Naama, who owned a successful graphic design business, had recently written him a letter following the murder of Danny Gonen who was killed in a Palestinian terror attack in the Binyamin region earlier in June.

"She signed the letter 'from a citizen who cares,'" said President Rivlin. "I wrote Naama back...that we are responsible for our security and for the security of our citizens" said the Israeli president. "I promised that I would continue to hug the victims of terror in homes where the light went out forever. I never imagined that in your home, the light would go out and that I, we, would hug your orphan kids."

"She was such a talented person and a good friend," Naama, a resident of Neriya and a friend of the victim, told Tazpit. "We just celebrated her 30th birthday. How can something like this happen?" she asked.

U.S. Ambassador to Israel, Dan Shapiro tweeted on his Twitter account: "We strongly condemn the murders of Eitam & Naama Henkin, z''l, which orphaned their children. Support efforts 2 bring terrorists 2 justice." The U.S. ambassador also tweeted a message in Hebrew, stating that there were no words that could comfort the orphaned children.

"Will the country continue to be silent after this tragedy? What's next? There are so many question marks and no answers," Naama told Tazpit. "We have every right to live here in security - we shouldn't have to suffer like this." 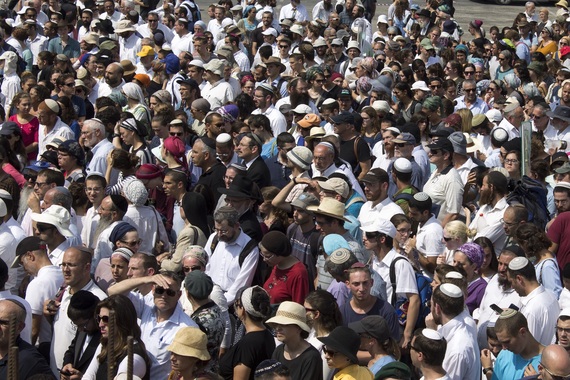 Photo: Reemon Silverman, Tazpit News Agency / Thousands gather at funeral of Hemkin couple in Jerusalem who were murdered in a shooting by Palestinian gunmen in Samaria.