On a sandy street on the northern shore of the Jaffna Peninsula in Sri Lanka, an innocuous building surrounded by mango and palmyra trees houses a rehabilitation center run by a Catholic priest, who in January 2005 just days after the tsunami began to counsel survivors.

"Now our population has increased," he told me the other day. Now we have war victims and people who were put in the IDP camps. Some of these people are survivors of the tsunami, the war and the camps. I need more counselors up here. I'm trying to train as many as I can. It is going to take a long long time to recover from this." 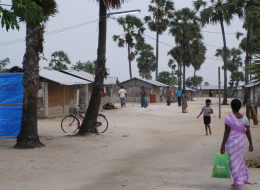 The stories I hear in Jaffa are heart wrenching. They hide behind the surfeit of activity--the bustle in the marketplace, the investors from the south, the ads and billboards that have sprung up--that define the surface of this town. Underneath there are stories that are not fathomable. Basically what happened was this. In the last years of the civil war, the violence in Jaffna escalated. People thought they would be safer in an area south of here called the Vanni. And so they left. Among them were students from the University of Jaffna who went south to be with family in the city of Kilinochchi. The problem is that the war shifted south to precisely the area where the students had relocated. During the final weeks of the war, civilians got caught in the cross-fire. Many were used as human shields by both the LTTE and the Sri Lankan army and were then shoved into IDP camps as the war ended. That was in May. Most of the several hundred thousand who ended up in the camps are still there despite government promises to have everyone released by January. Friends tell me that with an election just over two weeks away the government may speed up the release of these people. But it hasn't happened yet.

Several months ago the Vice-Chancellor of the University of Jaffna made his way down to Kilinochchi and somehow got 400 of his students released. He brought them back to the university which was the only place they had to go. They had lost everything but the clothes on their back. Most of all they had lost family. In some cases family members had been killed, in other cases separated and put into different camps. There are still families here, lots of them, who can't find each other.

I met with some of the female students the other day over at the university. I thought I was going to meet with five. Fifty showed up. They had all been in the camps, and all were just recently released thanks to the efforts of the Vice-Chancellor. Two of the young women have children who are still in the camps. I asked how old the children were. "Two years old, Madam," came the answer as the young women pressed their handkerchiefs to their faces to hold back their tears.

"They are so young," I said to someone later. "Yes, madam, you are quite right. People got married so that they wouldn't be recruited by the LTTE (the Tamil Tigers). "Mostly it worked, but then this happened." 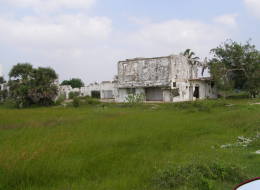 There are no easy answers either existential or practical to what I witnessed the other day. The onus is on the Sri Lankans just now to deliver themselves from this mess, most of the aid agencies having been kicked out of the camps. I have been told that the situation down in the Vanni is beyond one's ability to imagine, but the government has denied most agencies access to the area. Quietly, however, Sri Lankan agencies and private individuals are moving about the island doing, as one Sri Lankan put it "the needful." A Catholic nun in Colombo moves tirelessly every week between Colombo and the Vanni to help school children; Sarvodaya, a Sri Lankan aid organization, is still able to access areas off limits to international aid organizations. Some psychologists I know visit the camps doing what they can do while quietly trying to reunite families. I observed this same phenomenon in the first days after the tsunami and wrote about it in "Not Quite Paradise" (Beacon Press, 2009). While international aid organizations were stuck on the tarmac dealing with red tape, Sri Lankans themselves filled their trucks, emptied their shelves, bought out the local stores and headed to the coast via the back roads that only they knew and got to the survivors before anyone else. It is left to them again on this island to do the heavy lifting, this time to recover from a man-made catastrophe that has wrecked as much havoc over here as the 2004 tsunami.

There are finally the intangibles of war that no amount of material aid can address. It is trauma I am speaking of. I asked a colleague the other day how one of the female IDP students was doing. "Frozen," was all he answered.