The Miami Heat have done it again.

For the second season in a row, LeBron James and Heat are NBA champions. James poured in 37 points in the winner-take all 2013 NBA Finals finale as the Heat outlasted the San Antonio Spurs, 95-88.

"It took everything we had as a team, credit to the San Antonio Spurs," Dwyane Wade told Doris Burke of ESPN on the floor after the final buzzer had sounded on a thrilling Game 7. "They are an unbelievable team, unbelievable franchise. This was the hardest series we ever had to play but we're a resilient team and we did whatever it took."

What it took, was a classic performance from James, 23 points and 10 rebounds from Wade and an incredible effort from Shane Battier, who scored 18 points and shot 6-of-8 from beyond the arc in Game 7. Although Chris Bosh was held scoreless by the Spurs in Game 7, Battier and Mario Chalmers combined for 32 points.

"It's better to be timely than good," Battier quipped to Burke as confetti fell following the presentation of the Larry O'Brien Trophy. Prior to his stunning Game 7 performance, Battier had managed just 21 total points in the previous six games.

Despite the presence of a "Big Three" in each lineup, it was Chalmers who delivered one of the most devastating blows in the seventh round of the classic Finals bout. With time winding down in the third quarter and the Spurs holding a narrow 71-69 advantage, Chalmers gave the Heat the lead for good with a deep, three-point shot that just beat the buzzer.

"It feels great, a dream come true," Chalmers told Rachel Nichols of ESPN of his second championship in the champagne-soaked Heat locker room after the win. "We worked hard to get to this point. We had to leave it all on the court tonight."

WATCH: Chalmers Beats The Buzzer In The Third Quarter

Although the Heat never relinquished the lead after Chalmers' improbable, buzzer-beating bank shot, Tim Duncan and the Spurs relentlessly challenged down the stretch, withstanding nearly everything that the Heat could throw at them. Nearly. Having come within seconds of closing out their fifth title since selecting Duncan as the No. 1 overall selection in the 1997 NBA Draft in Game 6, the Spurs closed within two points in the final minute of regulation in Game 7. With the Heat clinging to a 90-88 lead and less than a minute to play, Duncan got the ball on the block. With Battier on his hip, the 37-year-old spun to his left and got off a point-blank, right-handed hook shot in the paint. Unlike so many of the shots during his illustrious career, it missed. Reacting quickly, Duncan got his right hand back on the ball, tipping it up toward the rim. He missed again.

"The obvious word is 'disappointing.' Tough end to the game," Duncan, who finished with 24 points, 12 rebounds, 4 steals and 1 block, told reporters after the game, via ASAP Sports. "Made some bad decisions, missed some shots. I don't know what to say. Just give credit to the Miami Heat. LeBron was unbelievable. Dwyane was great. I just think they found a way to get it done. We stayed in the game. We gave ourselves opportunities to win the game, we just couldn't turn that corner. They made more plays down the stretch, bottom line"

Following a Heat timeout, James drained a 19-foot jump shot to push the lead back to two possessions. The Spurs would not score again. Miami closed out the series-clinching win with three free throws and the celebration at AmericanAirlines Arena was on (complete with Bosh champagne GIF). James would be named NBA Finals MVP for the second straight season and the Heat were the first back-to-back champions in the NBA since the Los Angeles Lakers won twice on the bounce in 2009 and 2010.

"I work on my game a lot throughout the offseason," James told Burke after the game, specifically addressing his superlative midrange game. Nine of James' 12 made field goals in Game 7 came outside the paint. "I put a lot of work into it and to be able to come out here and (have) the results happen out on the floor is the ultimate. The ultimate. I'm at a loss for words." 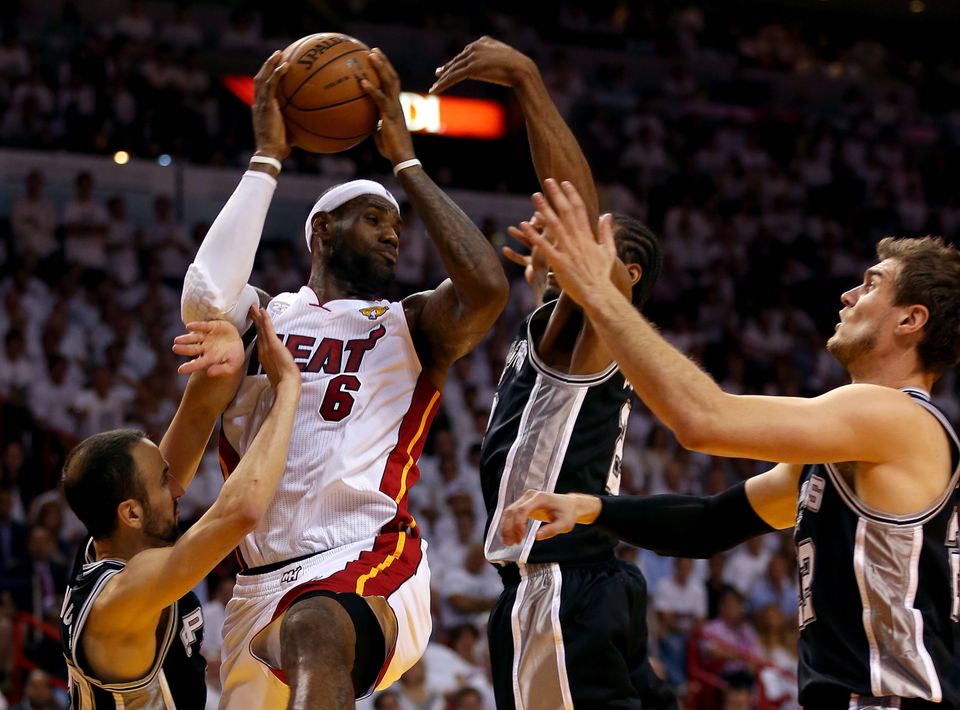 1 / 58
San Antonio Spurs v Miami Heat - Game 7
MIAMI, FL - JUNE 20: LeBron James #6 of the Miami Heat looks to pass against Manu Ginobili #20 and Kawhi Leonard #2 of the San Antonio Spurs in the second quarter during Game Seven of the 2013 NBA Finals at AmericanAirlines Arena on June 20, 2013 in Miami, Florida. NOTE TO USER: User expressly acknowledges and agrees that, by downloading and or using this photograph, User is consenting to the terms and conditions of the Getty Images License Agreement. (Photo by Mike Ehrmann/Getty Images)
Getty Images