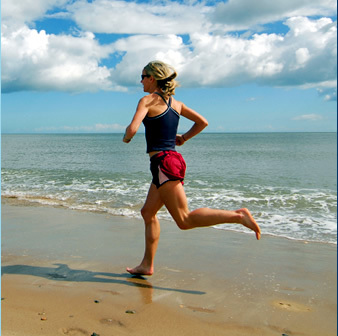 It is hot this week for the first time this summer, and of course this is the week we moved our daughter into her college dorm, lugging futons and desks under the direct blaze of sun. The temperature was in the 90s and the humidity was up there. The TV news was filled with heat warnings and stories of people dying in the heat. What the nightly new shows do not tell you is that the majority of people who have heat stroke or heat-related illnesses are usually elderly, infirm or people without access to A/C or an open window.

In my years of exercising in and throughout heat waves, I have only seen one woman overcome by heat exhaustion. She'd been at a wedding in the heat the day before, so she started her day dehydrated. She hadn't had breakfast, she was hungover, sleep-deprived and she thought she'd go for a four-mile run prior to bootcamp class. The studio A/C unit had frozen over and the room was warm.

She was the gym equivalent of a perfect storm.

This situation can be avoided by drinking water, slowing down your pace and listening to your body.

As a fitness teacher, my job is to condition my students for acute and temporary muscle failure and fatigue. Heat makes this task both more achievable and more miserable. I believe that you can train your body to do a better job of displacing heat. But you can't do it if your shadow never darkens the doorway of a gym every time it gets hot.

For me, the only thought more unthinkable than exercising in the heat is the horrible feeling of a sweaty non-exercising body. My theory is that hiding inside with your head in the fridge will only make you less adaptable to our ever-warming planet.

Think about this: If we sleep at night in a climate-controlled 68 degrees, then go to work in an equally comfy office or home, then hop in our vacuum-sealed car with the A/C on max, then we will devolve and lose our ability to handle hot weather. We will sweat more readily, even when we are not working hard.

We will become more dependent on controlling our indoor climate. This is a scary thought considering the crazy weather trends that we've witnessed in the past few years.

Take our canine friends, for example. Dogs have devolved. I grew up with our dog in the backyard dog house even in winter. Most dogs now could not survive outside in the wintry months. They have become soft in their domestication. Their ability to tolerate extreme cold has been bred out of them.

In my indoor cycle classes, I can tell exactly who lives in central air conditioning and who relies mostly on open windows and night breezes. Those people complaining most vociferously about the heat are the ones living in climate-controlled environments. Those who do not have it, are not as flushed or overwhelmed. They are not as bothered by fluctuations in temperature one way or the other.

They are survivors; surviving the heat is a head start on not becoming extinct.

- For starters, don't give up your workout. Don't be afraid to exercise when it's hot. Keep moving, but at lower or slower intensities.

Exercise helps your body become better at cooling itself off so that, even at rest, your body stays at it's preset 98.6 degrees without as much effort.

You don't have to work out as hard or as long when it's hot. As a matter of fact, you probably won't feel like working at a high intensity.

- Drink twice as much water as usual, especially right before exercise.

If you are hydrated, you should be making hourly pit stops in the bathroom. You should be drinking three liters a day before you do any exercise, so six liters would not be ridiculous on a hot day if you are exercising.

- Drink a slushie! Researchers have suggested that drinking a slushie-type drink prior to exercise can also keep you from overheating.

- Turn your home thermostat up to 72 degrees rather than 68.

- Roll down your car windows anytime it is bearable or whenever your hairdo will allow it. Both of these adjustments will also save fuel and energy.

So drink up, work out, and stay cool.