We were pretty dumbfounded when we saw these strange photos in the Daily Mail yesterday. Heather Morris of "Glee" fame posed for photographer Tyler Shields, who the UK paper called "young Hollywood's favourite photographer" (sure, we'll go with that), for a "confronting shoot."

"Confronting" is right -- looking at the images of the TV show's ditzy blonde Britney with a bruised eye and hands tied up in a plastic cord felt like being confronted with some glamorous-looking domestic abuse. And what is Heather doing drinking out of an iron?

Of the shoot, Shields told the Daily Mail happily, "No photoshop no tricks, all Heather. I was tied up, she was tied up, everybody got in the game. She even put the hot iron on my assistant Jordon's face. He is okay!"

But others aren't finding the photos so funny. Media outlets have condemned Shields for making light of abusive treatment of women, particularly in a household setting. Rita Smith, executive director for the Denver-based National Coalition Against Domestic Violence, told E!, "I don't know if Tyler is aware but I'm quite sure there are plenty of women who have been abused by these kinds of household appliances and children as well being hit with electrical cords."

But Shields defended his artistic concept, telling E!, "In no way were we promoting domestic violence. We wanted to do a bruised-up Barbie shoot and that's exactly what we did!"

See the pictures in question below -- does this photo shoot send the wrong message?

UPDATE: TMZ reports that in response to the controversy, photographer Tyler Shields will be auctioning off the most debated photo, the close-up of Heather Morris' bruised eye, with all proceeds going to "a top domestic violence charity." 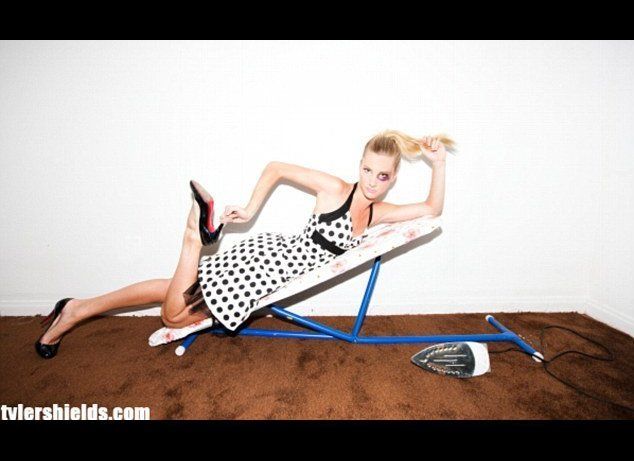