The ancient world of pagan gods worshipped by Greeks and Romans is so, so far away; and still is so close. Need an example? What about the architecture of so many official buildings in Washington inspired by Greek and Roman temples?

And what would our Western culture be without the Italian Renaissance, so much inspired and informed by the rediscovery and infatuation with the art of ancient Greece and Rome? 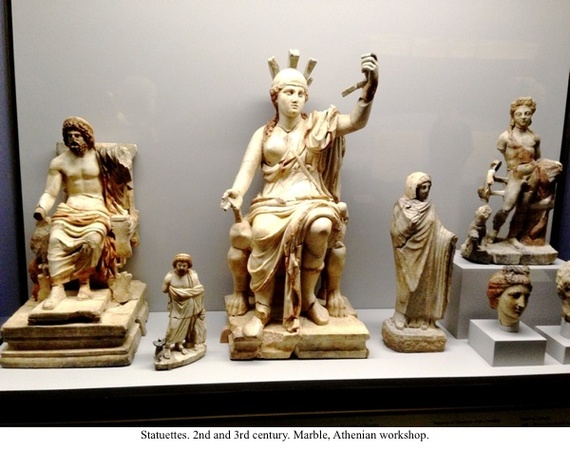 The new exhibition, "Heaven & Earth: Art of Byzantium from Greek Collections", which just opened at the Getty Villa, presents rare and, in many cases, magnificent examples of Byzantine art from the 4th to 15th century. Among them are mosaics, frescoes, sculptures, icons, jewelry, and ceramics --all of them coming from various Greek museums and many of them never before shown in the United States. 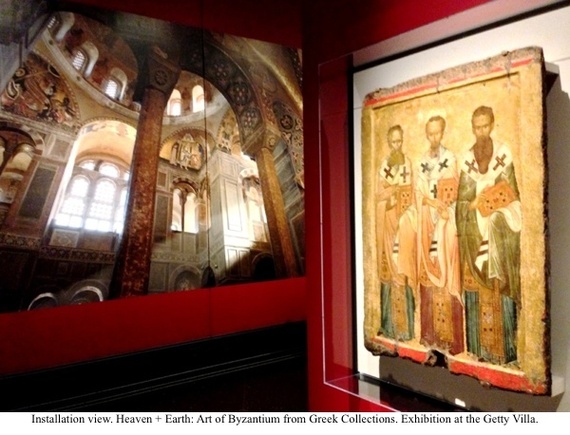 In the 4th century A.D., Emperor Constantine the Great made a dramatic change by moving the capital of the Roman Empire a thousand miles east of Rome to the Greek city of Byzantium. He renamed it Constantinople (now Istanbul). And thus, the Christian Byzantine Empire was born to prosper and last for over a millennium. 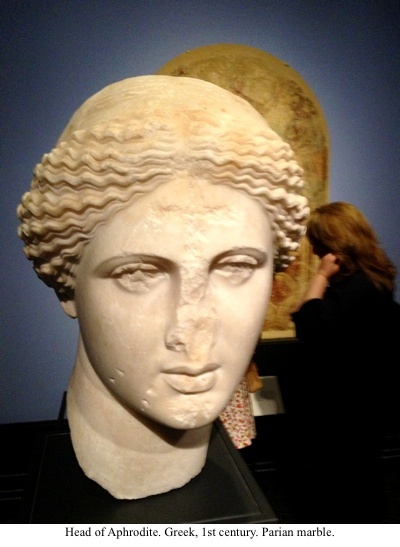 This exhibition at the Getty Villa illustrates in a very convincing way how the world of ancient pagan gods was tempered and adopted for the needs of the Christian church. One example of this is the great, 1st century, marble head of Aphrodite. Her beautiful face, being 2,000 years old, has expected signs of wear and tear. But look closely, and you will see the sign of the cross roughly chiseled into her forehead and nose. It is obvious that it was done by a devout Christian believer, probably in an attempt to baptize Aphrodite into Mary, mother of God?

Rather dramatically designed and installed, this exhibition, with its dense display of shimmering gold leaf icons, convincingly conveys the particular atmosphere of a Greek Orthodox Church. 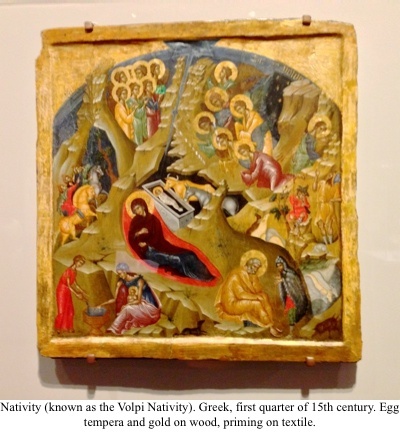 Among the highlights of the exhibition is the gorgeous 15th century icon with a Nativity scene. It is both highly stylized and, at the same time, full of realistic details. I am staring at the densely crowded composition, at a resting Mary, at animals in the stable watching baby Jesus, and then at a chorus of angels above, and all of this evokes for me the spirit and sound of a magnificently staged and performed Italian opera. 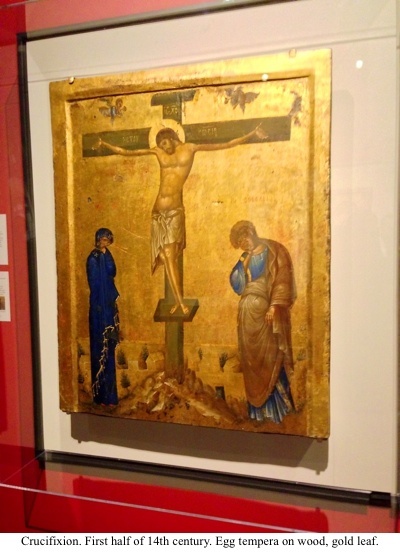 And here is another, equally dazzling gold leaf icon --this one from the 14th century, depicting the Crucifixion. Compared to the crowded Nativity scene, the composition of the Crucifixion is almost minimalistic. Somehow, it evokes for me the spiritual silence of John Cage's famous 1952 composition, 4'33", and the minimalism of precise movement of Merce Cunningham's choreography. 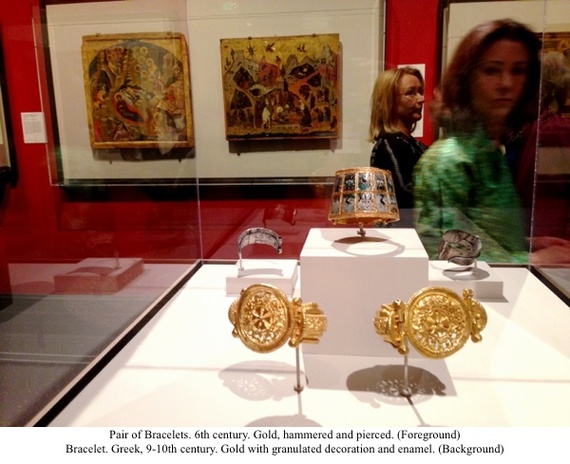 I have to admit that this "Heaven and Earth" exhibition stirred up for me a lot of memories of growing up in Russia, where my Russian Orthodox nanny would take me for walks that often included stops at a church. She would pray there while I played around. The museums in Moscow and St. Petersburg, as well as many Russian monasteries and churches, have a number of splendid Byzantine icons and artifacts similar to those on display at the Getty Villa. 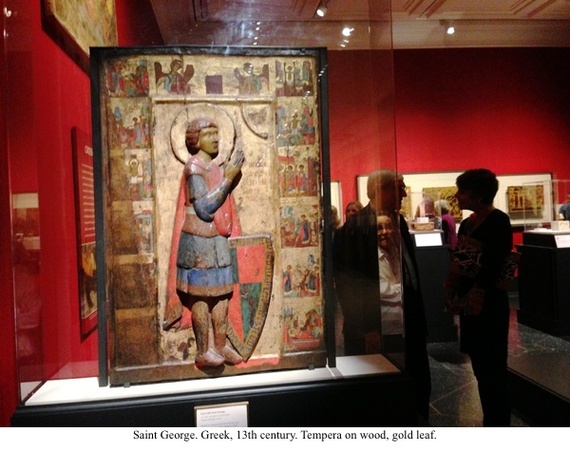 It may surprise you to learn that, in the 10th century, Vladimir the Great, the Russian prince, the ruler of Kievan Rus, sent envoys to various neighboring countries in search of new religions to replace the existing Slavic paganism. When his envoys returned to Russia, Prince Vladimir had the chance to compare Catholicism, Islam, and Judaism, none of which particularly appealed to him. Instead, he zeroed in on Orthodox Christianity. His choice shouldn't be a surprise, considering that, when his emissaries travelled to Constantinople, they were welcomed with a "red carpet" treatment full of festivals and celebrations of beautiful rituals of the Byzantine church. Obviously, his emissaries were impressed. And thus, Christianity became the official religion of Kievan Rus.