While the 413 places and approximately 85 million acres protected in our National Park System belong to the American people, a significant number are so important to the entire human family that they sit atop the world's greatest conservation lists: World Heritage Site, (22) Biosphere Reserve, (23) and Ramsar International Convention of Wetlands, (2). They are among the rarest of the rare on Planet Earth, of the same stature as the Great Wall of China, the Taj Mahal and the Galapagos Islands among others. So what happens to our national parks and public lands affects not just America but the world. 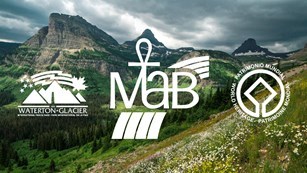 Though Glacier National Park is a World Heritage Site among other unique designations, intrusive noise from helicopter tour operators is a big issue that our friends at Quiet Glacier need our help to correct. NPS photo.

I started thinking about this a few weeks ago when we ran into our longtime friend Babacar M'Bow, nephew of Amadou-Mahtar M'Bow, the African who spearheaded many of these designations in his term as Secretary General of UNESCO from 1974 -1987. The legacy of mankind since we first emerged from the caves and sat around a campfire is desperately at stake in our upcoming elections.

The Democratic and Republican parties have starkly opposing views of what "public lands" should mean. The Democrat's conservation platform calls for collaborative stewardship similar to what we've been advancing through the Next100 Coalition. The Republican candidate scoffs at climate change and the platform aims to raid our public lands treasury and withdraw large swaths, with no benefit to the nation. So the future of our children and all the children of the world will be enhanced or greatly diminished, depending upon who is elected. 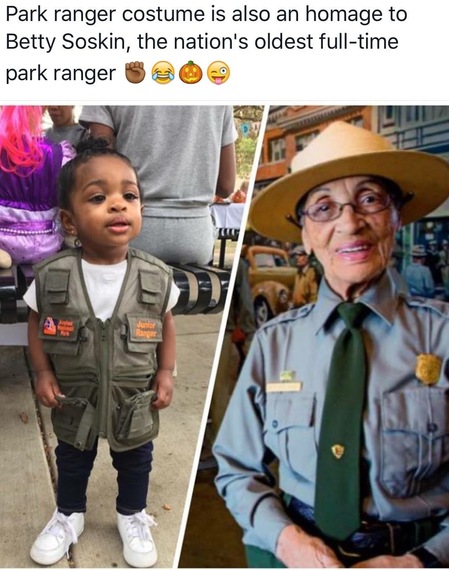 "Bookends for our national parks" - Ranger Betty Reid Soskin, 95, wrote an impassioned message about what it means to her to see the admiration in young people's eyes for her NPS uniform, obviously shared by the family of the budding park ranger.

This brought me moments of extreme poignancy over the past week when we visited our grandchildren. Looking into the bright eyes of an 11-year-old who builds robots and computers, worships Elon Musk and still loves to roller board and play hide-and-seek with his friends, I felt a pang:

Am I doing everything I can and should to secure an environment in which he can live out his dreams as our ancestors did for us? In the future will he have to wear a face mask or carry oxygen when he goes out? It wasn't so long ago that we didn't have to buy bottled water.

I also saw vividly how the actions of our predecessors affects us today when I attended Homecoming at Morehouse College with Frank and spent time with many of his classmates, now in (or approaching) their 80s. The alma mater of Dr. Martin Luther King Jr. a few miles from his birth home protected in Martin Luther King Jr. National Historical Park was teeming with the happy expectant faces of young men, joined by the beautiful young women from neighboring Spelman College. 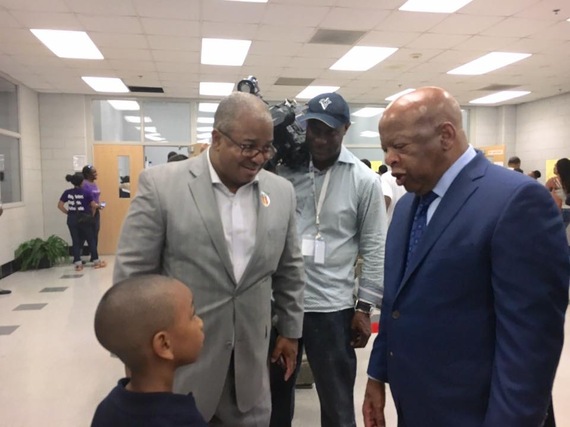 Young KJ Jelks learns civic responsibility from the original, Congressman John Lewis, at the voting booth with his parents, Rev. Ken Jelks and his mom, Spelman graduate, White House Conservation Champion Na'Taki Osborne Jelks, PhD. By age 4 he had the Grand Canyon and many other parks under his belt.

Entering the Morehouse School of Medicine building for the alumni breakfast, I was elated to see a sign promoting an upcoming Hike Out to Cascade Springs Nature Preserve, an activity we helped spearhead many years ago as part of the Keeping It Wild program. We connected with Frank's first roommate at Morehouse and lifelong friend, Dr. Wilbur Leaphart, an educator who revolutionized the middle school system and served as Chair of KIW for several years.

At the President's Brunch we met a young rear admiral who told us that our son Frank Jr., was the Morehouse Man who "made him" in their fraternity. While he and Frank talked Morehouse, his wife and I talked about what national parks were easily accessible on their trips across the country, other than the ones they already visited. 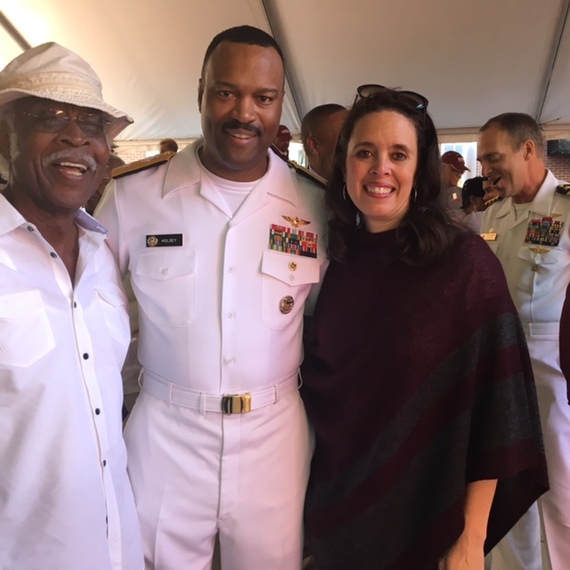 Rear Admiral Alvin Holsey talked Morehouse with Frank while his wife and I talked national parks.

Over drinks that night with two longtime Morehouse friends, I saw the light come on in Frank's eyes as we walked down memory lane and he realized how he was tapped to go to Morehouse. One of his classmates recently retired as the Chief Design Engineer for a multi-billion dollar US Army Combat Systems program after a hugely successful career. The other chuckled when he told us how he got his Morehouse nickname, "Iron Stomach."

"We were protesting the food and 'mystery meat' so it was agreed that all of us would walk out and not eat it," he said. "But I had no choice. I had to eat it because I didn't have .50 cents to buy a chicken sandwich off campus." Later he was invited to the Dean's house and to his amazement, they were eating the same food. In his career as a plastic surgeon he was at one point among the 350 highest qualified in the land. Living in Seattle they are big fans of our national parks. All three Morehouse men said there was no doubt that Morehouse was the turning point in their lives.

As I listened, I remembered Bill O'Reilly a few years ago saying he was shocked to find that Black-owned Sylvia's restaurant in New York was just like any other restaurant, and no one was using expletives or yelling for food. The current Republican presidential candidate reveals a deplorably similar lack of awareness about Black lives and seems to get his ideas about his countrymen and women from sitcoms/reality TV. How would those two stack up at this table, I wondered? How does the calculated trumpeting of derogatory falsehoods about non-white Americans distort our perception of each other?

The grave conflict underway at Standing Rock involving First Nations striving to protect their sacred land demonstrates what happens when corporate "rights" are made to trump human rights and indigenous cultural practices. Though Standing Rock is not a national park, it isn't difficult to imagine the damage that a pipeline can do to faraway ecosystems. The indigenous people are calling for help from all who respect their cause.

In the remaining months of President Obama's term, our Next100 Coalition is pressing for him to establish the Freedom Riders National Monument in Anniston, AL, for all the reasons Frank listed here. More than 500 people showed up last week to speak in favor, to the satisfaction of the four surviving Freedom Riders and their allies.

This may be the last time I write before that fateful date November 8. I pray that each one of us will exercise our right to vote, and do so in a way that is responsible to the future of our public lands treasures, our country and our world.