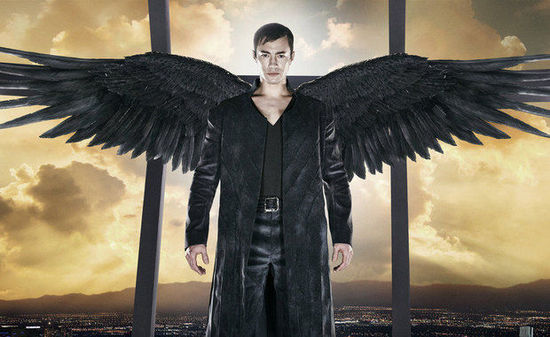 Heaven can't wait to raise a little hell. That seems to be the goal of the angels in Syfy's new series Dominion, premiering June 19 at 9 p.m.. Spun off from the 2010 film Legion, the series picks up 25 years after a war began between some irritable angelic forces and mankind.

In the post-apocalyptic show, God has taken an extended vacay, and the archangel Gabriel (Carl Beukes) is commanding a force of lower angels to tear up Earth. Now entrenched in fortified cities, humans fight with the heavenly kind, and with one another. Meanwhile, "good" archangel Michael (Tom Wisdom) tries to protect a soldier, who is "The Chosen One" (Christopher Egan).

But aren't angels supposed to rock a halo and wings, and are dedicated to looking out for God's favorite creation: Mankind?

You'd like to think that, but author Rosemary Ellen Guiley said angels are more complicated than the robed figures from Hollywood that like to play a harp and make an entrance through beams of light. And she would know; in addition to other paranormal topics, Guiley is an expert researcher on angels and has published six books on them, including The Encyclopedia of Angels and Ask the Angels.

In a recent interview, Guiley stated that angels aren't so much agents of good as "concerned with the balance and harmony of the cosmos."

"When things get out of balance, they are the agents of restoration," she said. "From a human perspective, this may be to the benefit of some and the detriment of others."

This idea breaks from paranormal pop culture that shows angels as guiding humans towards good decisions. In movies, TV shows and cartoons, they reveal the impact of our lives, loop us in on our role regarding potential prophecies and even help protect us from dark forces and the little devils on our other shoulder.

Speaking of devils, angels in entertainment are sometimes classified as "fallen," but are distinct from demons (though, theologically speaking, fallen angels are demons). Also, not to be confused with protective spirits of dead people who get visitation rights on earth, angels are inhuman, genderless entities; they were never alive in the biological sense.

These are more or less the angels that had a heavenly streak in 1940s films such as It's A Wonderful Life, Here Comes Mr. Jordan, The Horn Blows At Midnight and The Bishop's Wife. They then made a big comeback in the 1990s with Michael, and remakes The Preacher's Wife, Angels In The Outfield, City Of Angels. On TV, Roma Downey played a roadtripping angel on Touched By An Angel, picking up where Michael Landon left off in the 1984-89 series Highway to Heaven.

The "good companion" helper angel of the 20th century marked a drastic change from the stern officer of God previously seen. Guiley notes that, in Victorian times, angels were popular "but as messengers of doom and gloom." They would warn humans of their "wicked ways" and the "sad fates" that awaited them.

"They played a prominent role in death and mourning iconography, which was prominent in Victorian culture," she said.

Although they were labeled spirits, think of the Charles Dickens' past, present and yet-to-come ghosts in A Christmas Carol.

But post-World War II, angels experienced this "abrupt metamorphosis" and began to reflect an "underlying need for a closer connection to God, who is remote and abstract."

"[The war] changed the planet globally and forever, and massive social and political upheavals have occurred ever since," said Guiley. "The globalization of political power, war and threat of war, economic impacts, and instant media have subjected people to stresses unheard of in the past -- the natural response is a renewed search for God who will restore order and provide divine grace and help."

That restored order is not always pretty, and the recent pop culture angel has been seen as aggressive, and operating with its own agenda.

Long before 2010's Legion, the "bad" angel played a part in The Horn Blows At Midnight but didn't flash its wings in a big way until 1995's The Prophecy. In that film, Christopher Walken chewed scenery as Gabriel, who wanted to kickstart a civil war in Heaven. Gabriel (played by Tilda Swinton) also goes bad in 2005's Constantine. The archangel eventually was treated as a good guy, with Michael being the baddie, in 2007's Australian action flick Gabriel. Matt Damon and Ben Affleck portrayed expelled angel warriors on a rampage in Kevin Smith's 1999 comedy Dogma. On television, the ongoing series Supernatural on The CW has featured battles between good and bad angels (along with demons) for the majority of its nine seasons.

In this era of the tarnished halo, the bad angel may seek to root out evil, attempt to please God in its own way or might simply be jealous of the big guy's human pets.

From her perspective, Guiley said she thinks this entertainment trend is a "natural pendulum swing away from the cloying, overly sweet angels." As well as being novel, she thinks bad angels are just part of a nihilistic mindset in society, along with the despair of diminishing resources, rampant corruption and crumbling civilization. But she said this angelic hostility does have its roots in religious stories.

"Early Jewish lore has stories of angels who were not pleased with the creation of human beings," she said. "In one account from Merkabah mysticism, God asks angels if they approve of Adam; they say no, and he incinerates them out of anger."

Guiley said the same incineration fate befell a second group before a "much wiser" third group fell in line and agreed with God. She added there are other angels said to be "hostile to the spiritual aspirations of humans to advance to the throne of God," which inspires them to keep us fleshy folk out of the "spiritual gates."

She also pointed out that, in their task as agents of restoration, the winged warriors will battle the forces of evil at the end of days and fallen angel Satan will be bound for a thousand years. But if that description from the book of Revelations doesn't sound so bad, consider that angels are supposed to usher in a new heaven and earth - which will not have vacancy for everyone. Plus, that new earth involves seven angels unleashing seven plagues -- "the last anger of God" -- upon man.

"Once again, angels will do their job to restore balance to the cosmos, which involves human catastrophe and destruction," she said. "They are impartial, and do what is necessary."

"Help one day, kill the next, all in a day's work of keeping order [for Castiel]," she said.

Once Dominion premieres on Thursday, audiences will have a better idea as to what a day's work looks like for the show's superstar seraphim. But if these heavenly hellraisers opt for a machine gun over a harp, at least they're just following order.