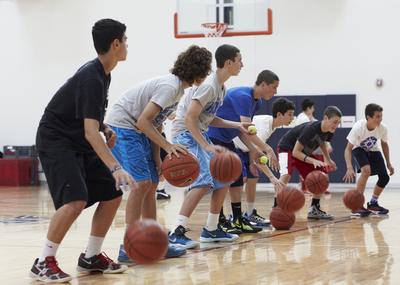 Though there aren't any Jewish starters in the upcoming NBA finals between the Warriors and the Cavaliers, that doesn't mean Jews don't love basketball. One of those is a recent Jewish USC graduate, a true superstar, Sam Fein.

Sam created a summer camp for Jewish children called Hebrew Hoops a few years ago because he wanted to, "merge the two arenas of sports and Judaism." Those are two things that Sam is passionate about and he showed his love of the Jewish people as a major student leader at USC Hillel, where I am a Rabbi-in-Residence.

Hebrew Hoops connects children with Judaism by approaching Judaism through a game they love. "I believe that sports have the power to draw in youth and engage them," said Sam, "offering a Jewish perspective in understanding life's greater lessons."

Parents have shown a great enthusiasm for the program. One parent wrote:

My son attended the Hebrew Hoops Basketball Camp this summer and had a great time. The daily skill development drills helped him improve his basketball game while he enjoyed the camaraderie of the other kids. I was thoroughly impressed with the organization of the camp and look forward to him participating again next year!

Sam describes the camp as combining "Jewish learning with a classic basketball curriculum" that encourages participants to view sport through a Jewish lens. Not only do campers improve their individual skills, they do this while learning about the intertwining histories of the Jewish people and sports, studying Jewish values within the game of basketball. During the camp they will also hear from guest speakers who are Jewish athletes and coaches.

Sounds great, right? Where was this program when I was a kid?!

Hebrew Hoops serves children between grades 4-9 and they have just a few more spots for 2015. Please visit www.HebrewHoops.org for more information or contact Sam Fein at sam.fein@hebrewhoops.org.