While Big Coal continues to bankroll the largest public relations campaign of "clean coal" denial in recent history, former US Representative and historian Ken Hechler has issued an urgent wake up call to Greens and liberal Democrats: Tragic lessons in history remind us that the coal crisis and its deniers call for more hellraisers, not compromise.

This is the truth: While Democrats in Washington, DC tie themselves into knots over regulatory inaction and Big Coal slogans, it takes a 94-year-old hellraiser to sound the alarm on the most overlooked environmental and human rights violations today.

Big Coal must be confronted, not coddled.

As one of our nation's liberal titans, Hechler understands the Democratic Party's vexing relationship with Big Coal and its 150 years of denial of the true cost of coal. While black lung was first diagnosed in 1831, it took Hechler's congressional leadership to pass federal legislation to deal with its ravages in 1969. Though scientists recognized the deleterious impact of sulfur dioxide emissions as early as the 1860s, it took an aggressive grassroots movement to pass the Clean Air Act of 1990 to overcome the denial of acid rain, which had scorched the forests from the Appalachians to Canada.

Hechler is no stranger to history and its crises. As a military officer in World War II, Hechler interrogated Nazi war criminals; as a history professor and author, he assisted Franklin D. Roosevelt with his 13-volume public papers. As a US Representative from West Virginia, Hechler was the only member in Congress to march with Dr. Martin Luther King, Jr. at Selma, Alabama in 1965.

And this June, the 94-year-old coalfield hero took to the streets to stand up to the bankrolled wrath of union-busting Big Coal thugs and joined a protest at Marsh Fork Elementary in the Coal River Valley of West Virginia, where school children must play amid toxic coal dust and sit under the horrific reality of a 2.8 billion gallon lake of coal sludge as federally sanctioned mountaintop removal blasting takes place nearby. 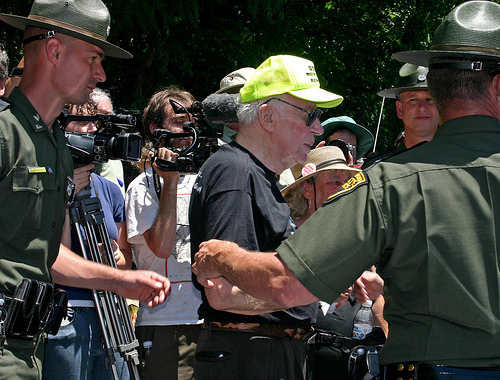 In truth, he would settle for a new generation of hellraisers to dislodge the Democrats and the nation from its indifference to the devastation of mountaintop removal mining, which has left his state of West Virginia in economic and environmental ruin.

In a commentary last month in the Charleston Gazette, Hechler wrote:

"I used to be an agitator, then an activist. Now I am a hellraiser. At the age of 94, and 95 in September, there's not enough time left.

It began rather suddenly on Oct. 21, 1966. Far off across the Atlantic in the little country of Wales, something happened which seared my conscience. In the little town of Aberfan, a joyful group of over 100 elementary school students in their morning assembly enthusiastically sang "All Things Bright and Beautiful."

Shortly after 9 a.m. a deafening roar resounded just after the assembly. Some of the teachers thought it sounded like a jet plane about to crash into the school. They hurried the students underneath their desks.

There had been a heavy rain the night before. On the mountain above the school a huge collection of coal refuse or "gob" suddenly broke loose. A 40-foot-deep mass of sludge roared down the mountain and crashed headlong into the school. More than 100 little students were entombed along with most of their teachers. They didn't have a chance.

Including adults in Aberfan, 144 lives were snuffled out that day. Less than a year later, just after the Fourth of July, 1967, I began getting phone calls from my friends along Buffalo Creek and other sections of Logan County which I represented in Congress, urging me to come down and see all the damage being done by mudslides of sludge after downpours over the holiday.

What I saw, particularly along Buffalo Creek, horrified me. I telephoned Gov. Hulett Smith and urged him to assemble a team of officials to see for themselves the danger confronting the residents, and to figure out what remedial measures were necessary to save people's lives. I had the disaster at Aberfan very much on my mind.

Gov. Smith said he would ask Finance Commissioner Truman Gore and officials of the State Road Commission and Department of Natural Resources to be ready for a call from me. I also asked two representatives on the Army Corps of Engineers to join the group of state officials to drive down to Buffalo Creek and other threatened areas of Logan County the following morning.

It was raining the next morning, but the officials all showed up. I also asked the local head of Island Creek Coal Co., Richard Herron, to come along, since one of the trouble spots was at Proctor Hollow near Amherstdale on Buffalo Creek.

News reporters from the Logan Banner, The Charleston Gazette and The Herald-Dispatch in Huntington ran accounts of our 1967 warning. But nothing was done -- and five years later, 125 people were killed in the historic Buffalo Creek gob pile dam collapse.

That's why 30 of us were arrested on June 23 this year for protesting the sludge pond that hangs like a Sword of Damocles a few hundred yards up the mountain above Marsh Fork Elementary School in Raleigh County. With 2.8 billion gallons of sludge close to the blasting of mountaintop removal nearby, is it any wonder that I think about Aberfan?"

Here's an interview from the protest:

It took a disaster in 1968 to finally convince President Richard Nixon and the US Congress to act on black lung disease--which still kills three coal miners daily.

Here's a clip on Hechler's heroic role in that crisis:

Earlier this summer, Hechler, as the most knowledgeable person on the complexities of the coalfields, issued a call to President Obama for a "Harry S. Truman moment":
http://www.huffingtonpost.com/jeff-biggers/rep-hechler-to-president_b_211996.html

What is it going to take to get President Barack Obama and the US Congress to stop mountaintop removal?