In the wake of tragedy, one boy from Texas found an generous way to protect his community.

Hector Montoya, 9, from Grand Prairie was saving up for a PlayStation 4 video game console. However, after hearing about a deadly fire that claimed the lives of a mother and daughter nearby, he decided to spend his money on buying smoke detectors for houses in his community that didn't have them, CNN reported.

"It really hurts my heart to see people die in a fire," Hector told the outlet.

He'd saved $300, and with it he was able to buy 100 smoke detectors which the local fire department installed last weekend, NBC 5 DFW reported.

"Saving a life is more important," Hector told the outlet.

The inspiring kid was planning to save up again for the game console, but now he won't have to.

After word of his good deed was spread on the local news, strangers decided to reward the selfless kid with the PS4 he had originally intended to buy, and also to donate an additional $100 for more smoke alarms, CNN reported.

"Helping other people makes me feel good," Hector told NBC 5 DFW. "I'm making a difference by doing this, and helping everybody."

This Boy Saved For A PlayStation, But Then Tragedy Struck And He Helped His Community Instead
Cutest Kids Notes 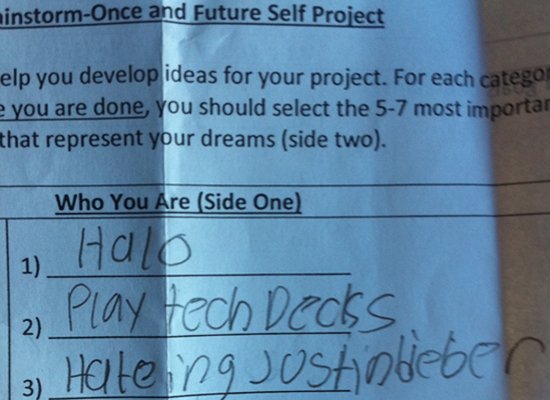 1 / 35
Interesting Answer
"My 12-year-old son had a recent assignment in his 7th grade Language Arts class.  The students were apparently to list what they were interested in currently and what they projected they'd be doing in the future. Check out what my son said what currently defined him under the subheading 'Who You Are.'" - Dawn E.