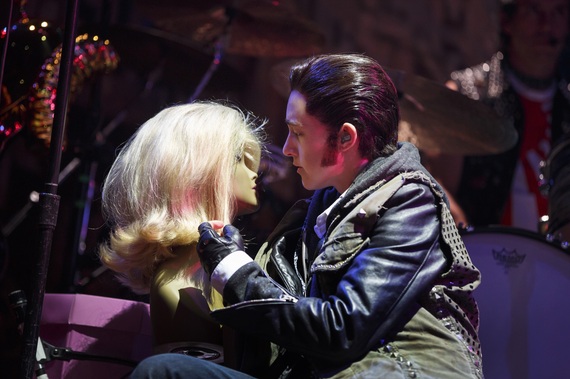 Lena Hall as Yitzhak in Hedwig and the Angry Inch. (Photo by Joan Marcus)

Neil Patrick Harris isn't the only one with fans in the audience at Hedwig and the Angry Inch. Lena Hall, who plays Yitzhak opposite Harris's Hedwig, in the show, about an East German band frontwoman and her botched sex change operation, has some outspoken supporters of her own.

"The other night, someone in the audience was like, 'We love you Yitzhak! We love you so much!" Hall recalls. "And Neil was just like, 'Okay. It's my show.'"

The show originally opened Off-Broadway in 1998, starring book-writer John Cameron Mitchell who subsequently directed and played the role in the 2001 film adaptation, and the musical, with score by Stephen Trask, is making its first appearance on the Great White Way in a production directed by Michael Mayer.

Though Harris is definitely the headliner, Hall is making waves of her own as Hedwig's loving husband, who gave up everything to be with the star. The Haight-Ashbury native is no stranger to rock-n-roll. She grew up listening to Hendrix with her parents, and she moonlights as the lead singer of The Deafening. (And yes, she still plays gigs during Hedwig's run.) However, Hedwig marks the first show where her rock and stage lives intersect, as she recently adopted the name Lena Hall for both. Previously, she had been using Hall with her band and her full name Celina Carvajal for theater credits, which include Kinky Boots, Tarzan, and Cats.

There are a few other things that are new for her as well. While Harris has fun getting gussied up, Hall sports a packer, among other male-centric accoutrements, for her own drag transformation.

"I really try to butch it up," Hall says with a laugh, adding that she specifically requested the packer. "All it does is it helps you inform your body a little more," she says of the accessory. "It's a constant fight between being a woman and trying to play a man. The body and the physicality of it is what really sells a character so it's a constant fight between what I naturally want to do and the character. It's helpful to have something there."

However, on a sunny Friday morning in New York, Hall couldn't look or be more different from her onstage persona. Bare-faced with her blue eyes piercing from behind horn-rimmed glasses, Hall chats about working with Harris, her now-legendary audition, and her rocker alterego.

What was your audition like?
The audition process for this part was totally grueling. I knew the part, but there's not a whole lot written about the character so a lot of it is up for interpretation. From the very beginning, I dressed up as a man, and I brought in an electric guitarist [Deafening bandmate Burt Rock] instead of a pianist and I brought an amp to these random rehearsal spaces. Before the final audition, they had asked me to come in as Yitzhak and leave as Yitzhak and tell a story or read an obituary or tell a joke or something. So I wrote an entire monologue, and I filmed a Kickstarter campaign in character and came in and I did that. It was really ballsy to show a video at an audition, but they loved it. This video is a legend because it's been taken off the Internet.

What was the Kickstarter campaign for?
It was to bring Rent back to Broadway so that Yitzhak could star as Angel. And it was done very much like someone who has been in Croatia for their whole life and now they're just coming to America and they're discovering what's really new on the Internet.

Where did you get that idea?
Just brainstorming about a monologue. I told the story of how I grew up in Croatia in a really small farm town that produced yak hair. And our biggest client was Cats on Broadway and that's how I knew about theater because we manufactured all the yak hair for the wigs for Cats. And then when the show closed, the town went under. It was like the big thing that kept the town running. This was my monologue all leading up to the video. It was kind of how Yitzhak knew about theater and loved it so much and how Yitzhak wanted to be a performer and be on Broadway so bad.

Was Neil at your auditions?
No, they filmed my audition for him to watch. I met him the first day we had rehearsal together, which was the first week of February. We have mutual friends. I had dated some of his friends. I had known of him, and I had talked to him briefly ages ago on the phone. Our paths never really crossed. So it was easy because he already kind of knew about me, and I already knew about him. There was an instant chemistry. He was immediately so amazing, and he licked my face and grabbed my crotch. It's in the script! It's all in the script. I was like, "Just do whatever. I'm your punching bag so you do whatever. I'm here and I'm ready for it." There was no learning curve with us.

Since you play a man in the show, are there any men in your own life that you took inspiration from?
No, I actually took a lot of inspiration from men's eyebrows. It's such a weird detail to transfix on. Some men have these naturally sad eyebrows that just come up in the middle and go straight across so they constantly look kind of sad and hopeful, which is exactly what the character is. It was just something that I had noticed when I was looking at men and studying them and their body language. I noticed that the eyebrows were the really telling thing. I take like half an hour putting my eyebrows on.

What else helps you get into character before each show?
I get to the theater really early. It's like a mental preparation. I've been learning some Croatian, and it helps with the dialect a lot. And every day before the show, I'll sit and I'll write Hedwig a letter as Yitzhak. I'll talk about the day I had or how much I love Hedwig or share a poem in Croatian. My room is decorated in a masculine style. It's just like a meditation. And having an hour and a half before the show, I really like that.

Does being in a band help you get into the world of the show as well?
For sure. Being in a band for seven years has been the ultimate training for doing a rock musical. It beats the crap out of you. It really does. What's interesting is Neil's never experienced what it felt like to be in a rock club. They were trying to get him to experience it, and we did these outside club dates with the band and with Neil. He'll never know what it's like to be in a real band in New York where there's five people there and it really sucks. And the clubs hate you. There's the struggle of that for our whole career in my band. Just the struggle of trying to get people to come out and listen to real rock-n-roll. It's hard. People aren't interested in a new rock-n-roll band. It's totally not mainstream. We're definitely going against the grain completely. But finally people are starting to show up. I feel like that's such an important part, especially of Hedwig's journey, to play for a crowd that doesn't want to see you.

That must be tough with Neil on stage.
One day his cord got caught, and I'm responsible for all his microphones, for his cords, for his stands, for everything. I'm like his personal Local 1 while he's onstage. I'm the only person who can touch all the props and all the microphones and everything onstage in case he gets caught in one of the set pieces, which he has before. Usually I'll wait until a joke lands because I don't like moving in the middle of a joke, and then I'll go and I'll fix the cord. The other night, he just got fixed on this cord and he went "Why are you sitting there? Come and do something. You're just sitting there moping. All you do is mope, all the time. Why don't you wrap the cord around your neck and go do something with your life?" And he kept harping on me just sitting and moping. At that point, you just turn your back to the audience. You just can't. I tried so hard, but I just felt myself cracking. Turn your back to the audience.

What do you do if it's a problem you can't fix?
If anything disastrous happens, Neil has to leave the stage. We have in-ear monitors and so if his transmitter goes out, he has to leave the stage. We as the band have to do something. So we have "Random Number Generation," which is the song that was on the Off-Broadway cast album and we have "Freaks," which is the song from the movie, ready to go just in case.

You should totally do a monologue.
It's would be hilarious. And in all seriousness, I should probably have it in my back pocket just in case.