Last week, a new audio message emerged from ISIS of its leader, Abu Bakr al-Baghdadi, calling on all Muslims to travel and join the caliphate. The voice in the message states "There is no might nor honor nor safety nor rights for you except in the shade of the caliphate." As a devout American Muslim - born and raised as a staunch loyal citizen of the United States - I found myself shockingly nodding in agreement with this message. He is right - as a Muslim, I agree 100% that our honor and safety can be found within the comforting shade of caliphate. I second this call for all Muslims around the world to travel overseas to pledge allegiance to the caliphate.

As a devout Muslim, I have dedicated at least half my life to actively studying, understanding, following and teaching the message of the Prophet Muhammad. Among his teachings is the lesson on understanding the significance of Khilafat (the Arabic rendition of the word "caliphate"), which he said would save the Muslim world from tyranny and oppressive kingships. 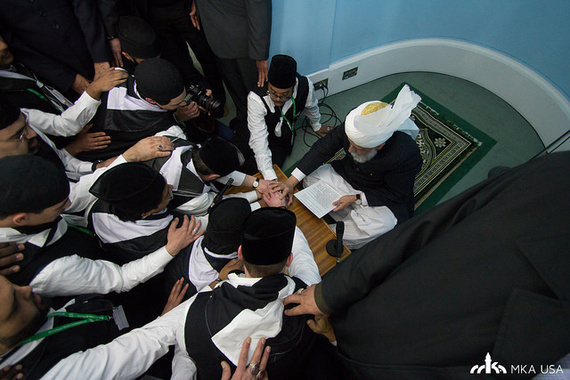 So I declare very openly my allegiance to the caliphate; for I agree that in the caliphate is prosperity. In fact, I was among more than 300 young Muslim men who flew overseas last month from the U.S. and Canada in order to take an oath of allegiance at the hands of the
Khalifa
(Arabic rendition of the word "Caliph") himself. The difference is that we pledged allegiance to the rightly guided Khalifa, His Holiness Mirza Masroor Ahmad, who resides in London, England.

The audio message from the leader of ISIS late last week included the following call to action for Muslims: "O Muslims go to war everywhere. It is the duty of every Muslim." This stands in stark contrast to the call of the Khalifa, Mirza Masroor Ahmad, who instructs Muslims of their duty to bring the world closer to God and to peace. When addressing thousands of young Muslims, he stated "It is your foremost duty to peacefully defend Islam and the blessed character of the Holy Prophet Muhammad (peace be upon him) against all attacks directed at them. Guide the world towards peace, tolerance and justice so that it can be saved from destruction."

In the audio message from al-Baghdadi, he made the shocking claim that echoes the likes of lunatics like Anjem Choudhry when he said "Islam was never a religion of peace. Islam is the religion of fighting. No one should believe that the war that we are waging is the war of the Islamic State...It is the war of Muslims against infidels." Once again, contrast this with the message of the Khalifa whom I swore allegiance to, who instructs his followers to call the world towards goodness and to desire good for everyone, regardless of their faith. He said "It is not our duty to just live in peace. Our duty is not only to stay away from any misdeeds. We are not required to simply stay away from chaos and disorder. But it is our responsibility to work to the fullest extent possible to bring about and establish peace in the world."


This is the message that is so direly needed in this day and age - the message of building bridges, promoting tolerance and pluralism, and creating peace in society. The belief that such a message is deeply rooted in the philosophy and doctrine of Islam is what drew me to pledge allegiance to the Caliph who has made it his goal to create and spread peace everywhere.


So yes, I find much comfort within the shade of the Khilafat. But I am among those who know - through study and experience - what caliphate truly means and has the power to do. Impostors like al-Baghdadi rely on the ignorance of their audience (Muslim and non-Muslim alike) to spread deception and destruction. Let's confront their calls for war and destruction with our collective call for education, peace and an adherence to the true principles of Khilafat.