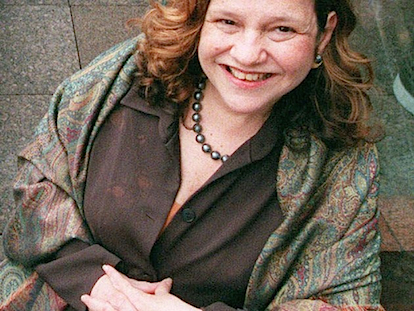 I hadn't thought about Wendy Wasserstein and The Heidi Chronicles in an awfully long time. Now, with the play back on Broadway (opening March 19), I find myself pondering: Why now? The answer I arrive at is: Because we could really use it, this deeply felt, deeply humane, deeply funny rumination on disappointment without despair. Yes, the Heidi Chronicles always has been held up as a play about women -- which it is. For me, though, it has always also been about looking back, in sadness and in laughter, in order to keep moving forward. Whatever your gender.

I certainly will see the current revival with Elisabeth Moss (who seems inspired casting). Before I do, however, I felt a powerful urge to look back myself. So I called a few people.

I began with André Bishop. Wendy Wasserstein was fresh out of Yale Drama School when she first met André, now the Artistic Director of Lincoln Center Theater, who was then the freshly-anointed Literary Manager at Playwrights Horizons. It was André who, in time, commissioned Wendy to write a new play for Playwrights Horizons. That play proved to be The Heidi Chronicles.

"I probably first read Heidi Chronicles in 1987," André recalled, "and I knew instantly that it was Wendy's best play to that point. But when we began performances, it seemed to take on a life of its own. It was Wendy's moment."

"Did you ever consider reviving it?" I asked André. "No," he replied, without hesitation. "For me, personally, to go back to a time when Wendy was so young and vibrant..." André sighed.

I just don't want to go back. I'm happy to see it again. But that was a very unique time for many of us; for Wendy, for me, for Dan Sullivan, who directed Heidi, for the stars -- Joan Allen, Peter Friedman, Boyd Gaines. Joan Allen and Peter Friedman actually got married. Even for the replacement cast -- Tony Shalhoub, who came in as Scoop Rosenbaum, Peter's role; Tony met his wife, Brooke Adams, when she was in the show, playing Heidi. It just was a play that had a lot of resonances for so many of us when we worked on it.

"Most of the producers of this new production are women," André went on,

And they feel very strongly about bringing in a new, younger audience, particularly women, who may not know about many of the things chronicled in the play. The new producers want a new generation to experience it. Now, I am of the generation of the play. I remember women's support groups and demonstrations. From my point of view, what makes the play even more poignant today is the passage of time. The passage of time has made the aspirations and the hopes of all those women even more alive because so much of what those women fought for and yearned for has come true and, yet, so much has not. And it's the 'has not' that lends the play an even deeper poignancy.

I wanted to speak with one of Heidi's women producers. Jeffrey Richards, a lead producer for the revival (yes, a guy), put me in touch with Susan Gallin, his producing colleague on the show.

"I took my daughter to the original production on Broadway," Susan Gallin informed me.

It was very moving for us. She was in college then, and it led to a lot of discussion. I can remember when I graduated from college in the sixties there were really only two options available to me, to become a teacher or to get married. The best of all possible worlds was to become a teacher and get married. For my daughter, coming out of college in 1990, marriage was not even part of the conversation. Everything was open to her. Now, here we are twenty-five years later, and everything seems to have changed for the better, and yet we're under assault. That's the conversation I hope to revive.

Julie Salamon wrote Wendy Wasserstein's biography, Wendy and the Lost Boys, which came out in 2011. "I think for a great many women of that generation, The Heidi Chronicles spoke to their frustrations, to their achievements, but most importantly to the difference between being involved in a political movement and what happens to you afterward personally," she remarked to me.

That was Wasserstein's genius, in a way, being able to differentiate between what is personal, what is political, what is historic and sociological, and then bringing it all together and making it dramatic. The question for The Heidi Chronicles today is: Is it still relevant? In fact, that is always the question asked about this play, almost since it was first done. Even when she was writing it, the time element was a big issue because the play covers such a wide swath of time, from the sixties to the late eighties. The question of relevance is imbedded in the The Heidi Chronicles. Is it a period piece?

I hoped that Heidi herself might answer that one, my pal, the marvelous Broadway set designer Heidi Ettinger, whose long-running friendship with Wendy Wasserstein was commemorated in the naming of Wendy's title character. I caught Heidi E. just as she was departing New York for a residency at the American Academy in Rome. A few days later, I telephoned her in Rome with my question.

"It is a period piece," Heidi laughed. "We all are now. But so what. It doesn't end there."

"What about you and Wendy?" I asked.

Wendy and I just hit it off. We were in the same class at Yale and began hanging out together from the first week as if we'd known each other for a thousand years. She gave me a copy of her first draft of The Heidi Chronicles with a very sweet inscription that said it was named after me. But it is really an autobiographical play. I was very moved by it the first time I read it. And very saddened. And as time went on, it became a kind of self-fulfilling tragic prophecy for Wendy.

"We'd spoken a lot over the years about what she saw as the betrayal of the feminist movement," Heidi explained.

That was no surprise. What surprised me was how bitter she was about it. And I think she became increasingly bitter as time went on. That said, there is a whole generation of young women today who are unaware of the struggles that Wendy and my generation went through, and they're not aware of the price they will ultimately be asked to pay, the choices they will be forced to make, and the long term implications of all those choices made when they're young. I don't think they necessarily see things as realistically as Wendy did. The Heidi Chronicles outlines it all in a very cold-eyed way that is, nevertheless, very sweet. So, maybe this revival will help them. I know I'm trying to get my two daughters-in-law to see it. If I had daughters I'd take them. But I don't.

Wendy Wasserstein died too young, of cancer, on January 30, 2006, at the age of fifty-five, having given birth to a daughter just six years before with the help of in-vitrio fertilization. I have one abiding memory of Wendy all my own. Through Heidi, I'd gotten to know her a little; we'd spent time together at various soirees that often seemed gleefully orchestrated by Wendy, even as she proclaimed shyness. On this occasion, an invitation arrived from Heidi's sister, Wendy Ettinger, to celebrate Wendy E.'s birthday with a night fishing boat expedition.

I didn't get it. Big time. I read "night" and "boat" and laid out my best linen dinner jacket and linen pants and, I do believe, two-tone oxfords -- beige and white! -- for a classic, cocktail-ish excursion around Manhattan island. Arriving at a pier, approaching sunset, I was loaded onto...well, a fishing boat, where everyone onboard -- a who's-who of the American theater, need I say -- seemed to be swaddled in sneakers and grunge. Except me.

And Wendy W. I have an image of her in taffeta and heels, but that might be memory enhanced. I do know that the boat pulled away from the pier and headed straight out to sea. The darker it got, the damper it got. With every passing swell, I began calculating, teeth chattering, how awfully long it was going to take us to sail back.

Then there were the fish. People actually caught some. The stench on that boat grew stinkier. I was cold. I was wet. And now I smelled. (I wound up throwing away every one of those reeking fancy duds.)

At last, I retreated below. Thank heaven there was a below, however unheated. Down a twist of stairs, I landed practically at the feet of Wendy Wasserstein, all a-huddle in a thin sweater in the dim light. One look and we both nearly burst into tears...of laughter.

In the end, we spent most of that long voyage braying show tunes at one another; the fishiest we could think of. "Blow High, Blow Low" and "This Was A Real Nice Clambake" from Carousel worked especially well.

"Wendy had a lot of plays to go," maintained Andre Bishop,

Because Wendy's plays chronicled what was happening in her world. She used her own life as a constant source of inspiration. We were able to see Wendy write about the young Wendy and young women rebelling against their mothers. We were able to watch a slightly older Wendy being a mother. But we never got to see Wendy write about getting old, about being an older woman, an older mother. That's the sadness, among many other things, that I feel at her death. She would have really been insightful about all that. And funny. But it was not to be.