It's been just over a year since the day Heidi Montag had ten plastic surgery procedures--a rough year in which she suffered nightmares about her face, husband Spencer pulled down her pants for her to use the bathroom and her plastic surgeon died in a texting-related car crash.

Now Heidi is baring her scars for Life & Style and in an interview tells the magazine she has deep regrets about the surgeries.

See before and after pictures of Heidi here.

Life & Style's press release follows; scroll down for photos and pick up the issue for more.

Heidi Montag was seeking perfection when she famously underwent 10 plastic surgery procedures in November 2009. Now a year later, Heidi reveals her operation-room battle wounds for the first time to Life & Style. "Parts of my body definitely look worse than they did presurgery," she told Life & Style exclusively at a photo shoot on Dec. 2. "This is not what I signed up for."

The former Hills star reveals a series of unsightly scars, red inflammation and uneven body parts including: a 2-inch-long raised blemish under her chin from her chin reduction, two caterpillar-size bald spots along her hairline from a brow lift, a horrifying jagged line behind her ears from having her ears pinned back, lumpy legs and four spots left on her lower back and below the buttocks from botched liposuction, a bright-red mark inside her right nostril, uneven boobs, a stretched mark on her chest and deep scars around her nipples from a second boob job.

"The big dark mark from my chin reduction is probably the most noticeable. But the absolute worst is on my breasts, and the scariest is below my butt cheek," Heidi tells Life & Style. "People have fewer scars from car accidents than I have on my body."

Heidi says the scars are constant reminders that she made a big mistake. "I would love to not be 'plastic girl' or whatever they call me. Surgery ruined my career and my personal life and just brought a lot of negativity into my world. I wish I could jump into a time machine and take it all back. Instead, I'm always going to feel like Edward Scissorhands." 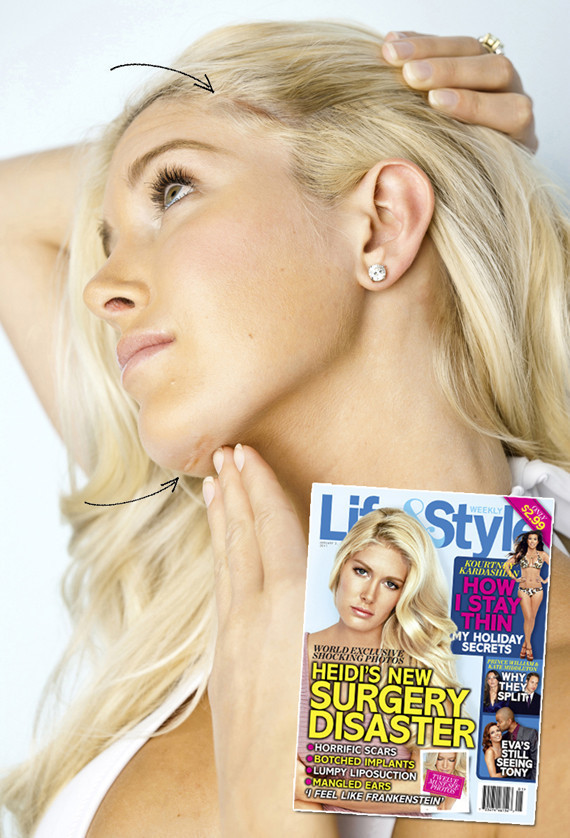 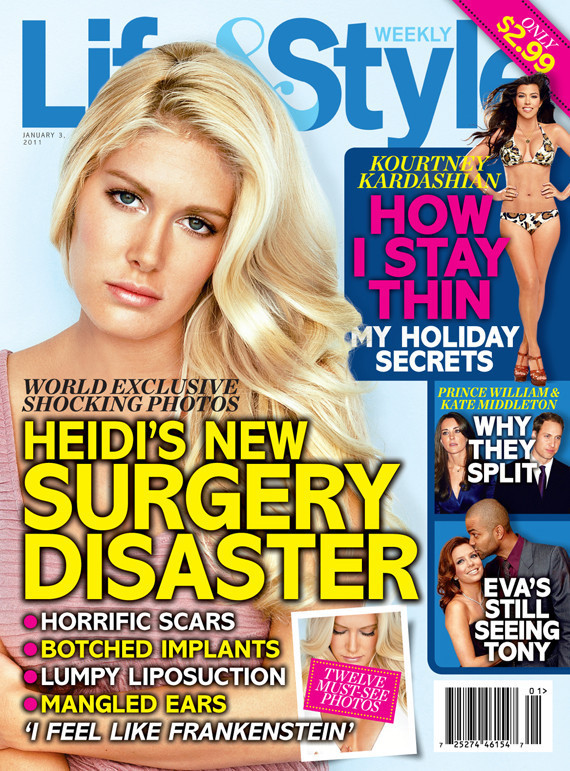