Heinz, which holds a 60 percent share of the ketchup market, is tweaking its formula for the first time in 4 decades.

Heinz has cooked up a new recipe for its iconic ketchup. The Pittsburgh-based condiment maker has started making batches of ketchup using a recipe with less salt. The new version will hit store shelves this summer.

Company officials say the 15 percent cut in sodium is the first significant change of formula in nearly 40 years.

Heinz spokeswoman Jessica Jackson said, "The catalyst . . . came from the changing needs of our consumers and our commitment to health and wellness." Jackson said the company had been planning the change for about two years. But it is coming just as Mayor Bloomberg and other politicians are leaning on big food companies to kick the salt. Heinz was one of 16 major food manufacturers that last month signed onto the National Salt Reduction Initiative, a plan led by Bloomberg to get companies to cut back on the salt in their products.

Heinz says the new recipe has been widely tested across the country, and gave some insight into the recipe revision:

The new Heinz ketchup recipe will contain about 15 percent less sodium, dropping the amount per tablespoon from 190 to 160 milligrams. Heinz will also make changes to the secret spices. "As we reduced the sodium, we rebalanced the special secret spices," [spokeswoman] Jackson said.

The revised ketchup formula won't be marked on the bottle with any new graphic or logo, but consumers can inspect the back label and nutrition information to determine whether they're getting the revised lower-sodium version. 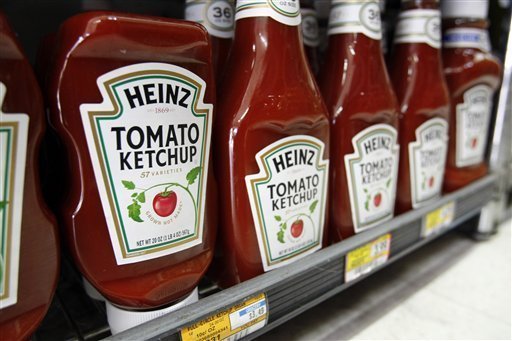