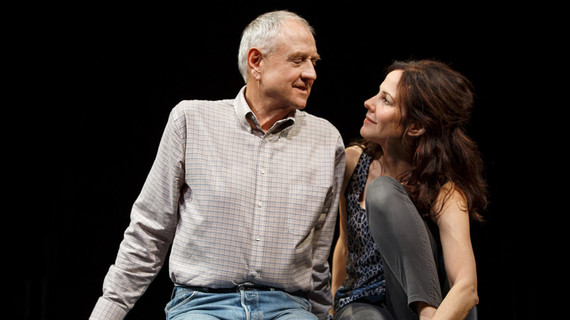 Simon Stephens' delicate comedy arrived on Broadway last week, a legitimate successor to his outstanding 2015 Tony Award-winning The Curious Incident of a Dog in the Night-Time that closed earlier this season.

On the face of it, the two works are dissimilar. Curious Incident was busy and electric, with an equally vibrant narrative, while the narrative of Heisenberg is as simple as its production is spare. Except that both draw on mathematics and science for inspiration, overtly in the case of Curious Incident, and in the case of Heisenberg, for sound structural guidance that drives his seemingly random plot to an insightful and satisfying conclusion.

The play's title is a reference to the scientific principle arguing that the more precisely one particular factor of matter is understood, the less precisely understood is another. Einstein spent his four post-relativity decades desperately searching for a theory of everything, but it is Stephens who has discovered that the Heisenberg Uncertainty Principle states a fundamental property as applicable to human character and relations as it is to atomic particles. And from this he has crafted a beautiful play.

Alex and Georgie meet by chance and as each is more precisely understood by the other over the course of six vignettes, they become, momentarily at least, much less so. Of course this is the writer's process, and analysis makes it sound heady. The result is anything but. Heisenberg is the reality we know and experience in that '...I don't even know who you are anymore' and '...who am I, anyway' kind of way. Stephens is wildly successful in applying uncertainty principles to human character and relations, codifying realities we know somewhere to be true, but haven't yet the language to exactly identify. Of course we know that people are contradictions and that opposites attract. But the distance between these platitudes and the specificity that Stephens' has reached is as wide as that between the cell and the atom. Sorry Einstein, but Stephens may have found your theory of everything.

And the result is exquisite - delicate in its observation of two damaged souls stumbling their way to the other.

Now I've used delicate twice and the evening is just that. But not so the dialogue, performances, and plot twists, each of which is as wild as an Einstein Halloween wig.

Denis Arndt's Alex is a stoic vessel of habit and disappointment who nonetheless surprises with interests and actions. His language is controlled, his communication direct, and his hidden self vast. Georgie is pure stream of conscious - funny, embarrassing, illuminating, a machine gun spew of idiosyncratic world observation.

Mary-Louise Parker has turned off-beat quirky into three-decades of career gold. Shoulders rolled painfully forward in an attempt to shrink into an anonymous dot, her insecure characters have a raging will to survive and the result is unfailingly sympathetic. While all of a type, her women are vivid and unique. Parker is gifted. Period. At 52, a skilled actor comparable to any. Her Georgie is a storm of enthusiasm, doubt, love, manipulation and contradiction. And, while very comic, thoroughly genuine.

This production is bare-boned, throwing the efforts of these two into nice relief and if you like watching the work of solid actors, you'll love this production. Surprises (and uncertainty) dominate in the eighty minutes we have with Alex and Georgie and the audience's experience is similar to that of these characters - the more we know the less we seem to know. The journey is fraught. It's humerous. It's always engaging and embedded in this seemingly small work is a deep probe into self-awareness (and not), understanding of the other (and not) and the continuous negotiation of (and in) relationship.

I was told a bit ago that given all the variables that need to be aligned, it is a wonder that any two people make a relationship happen, even for a short-time. But a relationship finally takes a leap of faith, perhaps the biggest leap of faith a person may make. Leaps are hard. They are particularly hard for Alex and Georgie.