They knew it was true, but now they've shown it: Scientists have demonstrated that the uncertainty principle, one of the most famous rules of quantum physics, operates in macroscopic objects visible to the naked eye.

The principle, described by physicist Werner Heisenberg nearly a century ago, states that the mere act of measuring the position of a particle, such as an electron, necessarily disturbs its momentum. That means the more precisely you try to measure its location, the less you know about how fast it's moving, and vice versa.

While in theory this principle operates on all objects, in practice its effects were thought to be measurable only in the tiny realm where the rules of quantum mechanics are important. In a new experiment, described in the Feb. 15 issue of the journal Science, physicists have shown that the uncertainty principle effects can be detected in a tiny drum visible to the naked eye. 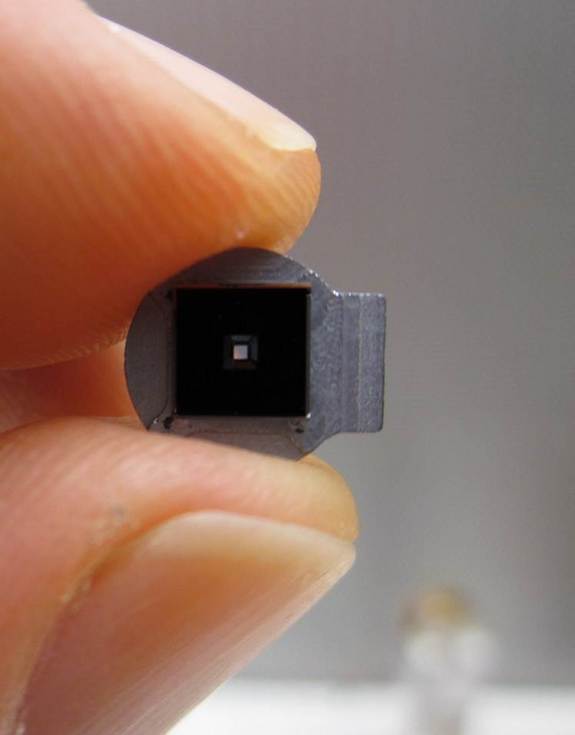 The tiny drum was placed between two mirrors and illuminated with laser light, and the shaking of the mirrors revealed the uncertainty principle in action.

The uncertainty principle is based on how disruptive any act of measurement is. If, for instance, a photon, or particle of light, from a microscope is used to view an electron, the photon will bounce off that electron and disrupt its momentum, said study co-author Tom Purdy, a physicist at JILA, a joint institute of the University of Colorado, Boulder and the National Institute of Standards and Technology. [Wacky Physics: The Coolest Little Particles in Nature]

But the bigger the object, the less of an effect a bouncing photon will have on its momentum, making the uncertainty principle less and less relevant at larger scales.

In recent years, however, physicists have been pushing the limits on which scales the principle appears in. To that end, Purdy and his colleagues created a 0.02-inch-wide (0.5 millimeters) drum made of silicon nitride, a ceramic material used in spaceships, drawn tight across a silicon frame.

They then set the drum between two mirrors, and shined laser light on it. Essentially, the drum is measured when photons bounce off the drum and deflect the mirrors a given amount, and increasing the number of photons boosts the measurement accuracy. But more photons cause greater and greater fluctuations that cause mirrors to shake violently, limiting the measurement accuracy. That extra shaking is the proof of the uncertainty principle in action. The setup was kept ultra-cold to prevent thermal fluctuations from drowning out this quantum effect.

The findings could have implications for the hunt for gravitational waves predicted by Einstein's theory of general relativity. In the next few years, the Laser Interferometer Gravitational Wave Observatory (LIGO), a pair of observatories in Louisiana and Washington, is set to use tiny sensors to measure gravitational waves in space-time, and the uncertainty principle could set limits on LIGO's measurement abilities.

LIGO's measurements "will be many orders of magnitude more microscopic than ours," Purdy told LiveScience.

The results of the recent experiment are novel in that they show both classical and quantum mechanics operating on the same scale, said Saurya Das, a theoretical physicist at the University of Lethbridge in Canada, who was not involved in the study.

"Half a millimeter is like something which we can actually hold in our hand," Das told LiveScience. "Obviously classical mechanics is valid, but they make quantum mechanics relevant at that size."

As a technical accomplishment, it's also impressive, Das said.

"At that scale, even 10 years ago people would have thought there's no point of doing this experiment, because you wouldn't have seen anything."

Heisenberg's Uncertainty Principle Works In 'Macro' As Well As Quantum World, Study Shows
Don't Try This At Home
1 / 5
Create plasma with a grape
DON'T TRY THIS AT HOME: A carefully cut grape in a microwave can create superheated gas if you set things up just right. It may look like a simple household experiment, but be prepared to destroy your microwave if you mess up! (Warning: some language in this video is inappropriate for children.)