New York City is about to get a bit more crowded. A record-tying six finalists will be heading to the Big Apple for the presentation of the Heisman Trophy.

The crowd of college football superstars will be headlined by Florida State quarterback Jameis Winston, who led the undefeated Seminoles to a berth in the BCS National Championship Game. Winston will be joined by Northern Illinois quarterback Jordan Lynch, Texas A&M quarterback Johnny Manziel, Boston College running back Andre Williams, Alabama quarterback A.J. McCarron and Auburn running back Tre Mason. This will be the first time since 1994 that six players were named as finalists for the famed stiff arm trophy, according to Chris Huston of HeismanPundit.com. The 2013 ceremony could be just the second time ever that so many contending players are in attendance. As noted by The Associated Press, eight players were invited to the ceremony in 1989 but only four attended.

In the words of the Heisman Trust, the award "recognizes the outstanding college football player whose performance best exhibits the pursuit of excellence with integrity." The trophy was first awarded in 1935 and every living winner has a vote each year. In 2013, there were 938 total ballots cast by 870 media members, 57 previous winners and one fan vote cast by the general public as part of a partnership with Nissan.

In 2012, Manziel became the first freshman player to take home the Heisman. A year later, Winston, widely considered the frontrunner, may turn the then-unprecedented win by a freshman into a trend. Manziel, meanwhile, is aiming to become just the second player to ever win the award twice. Former Ohio State running back Archie Griffin raised the iconic trophy in 1974 and 1975.

Votes were due on Monday, Dec. 9 at 5 p.m ET and the trio of finalists was revealed at 6 p.m. during a live edition of "SportsCenter" on ESPN. The 79th winner of the honor will be named on Saturday, Dec. 14. during a ceremony at the Best Buy Theater in Times Square.

Here is a look at the statistical accomplishments of the 2013 Heisman Trophy finalists:

By virtue of his own consistently sterling performances and poorly-timed lackluster outings by others in the Heisman race, Winston emerged as the frontrunner for the award as the college football season progressed. Despite his stellar statistics, Winston's candidacy was nearly derailed by off-field issues. Just days before the finalists were named, he learned that he would not be charged with sexually assaulting a woman who accused him of raping her in December 2012.

"I want to thank my family, friends, coaches and teammates for standing by me during a difficult time," Winston said in a statement released through his attorney shortly after it was announced that he would not be facing charges." I also want to thank the State Attorney's Office for examining all of the facts and reaching a decision in a conclusive manner. It's been difficult to stay silent through this process, but I never lost faith in the truth or in who I am. I'm very relieved I will be able to continue my education at Florida State and I'm excited I can now get back to helping our team achieve its goals." 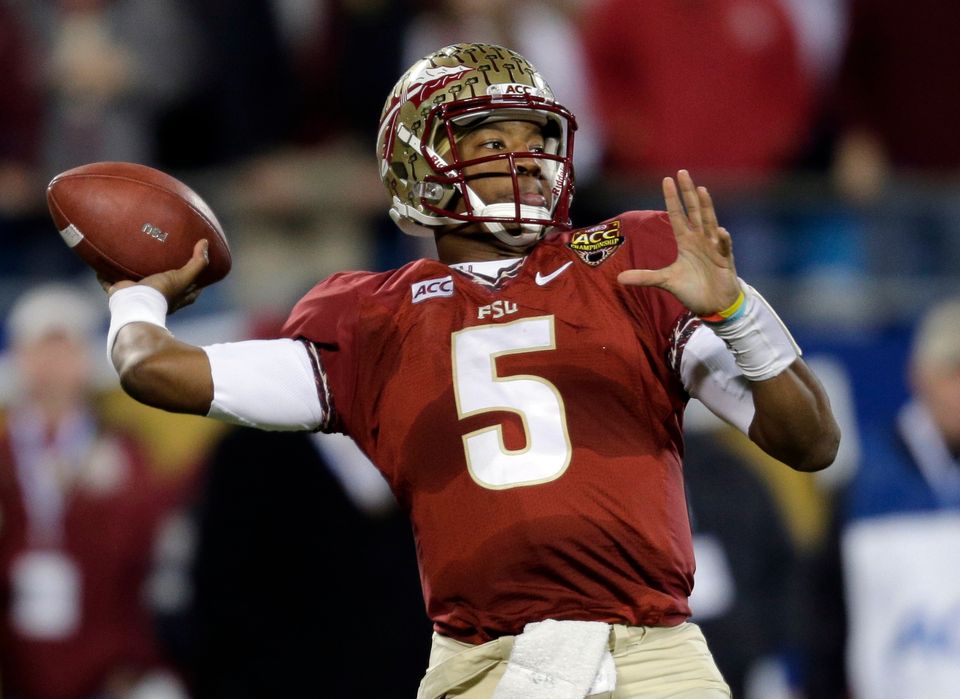 1 / 6
Jameis Winston
The 19-year-old Florida State quarterback led the Seminoles to an undefeated 13-0 record and a berth in the BCS National Championship Game. Winston threw for 3,820 yards and 38 touchdowns to break FBS records for passing yards and passing touchdowns by a freshman. His total passing yards ranked eight among all FBS quarterback in 2013 and his total passing touchdowns was second overall. His 10.9 yards per attempt was higher than all other FBS quarterbacks.
AP