This Halloween, take a look at the ghoulish décor at your local supermarket check-out line. You'll see a familiar character, green-faced and festooned with warts: the Halloween Witch. HuffPost's Antonia Blumberg wrote an excellent article about cultural appropriation during Halloween, but let's take a closer look (if we dare) at the inspiration for the cackling Halloween hag, the patroness of witches: Hekate.

Much has been written about witches in film and television, but unlike Halloween's typical threatening depictions, Hollywood's witches are usually portrayed by glamorous actresses. Even with perfect hair and makeup, you'll see Hekate's influence in witch-centric films and television from recent decades: Witches of Eastwick, Practical Magic, Hocus Pocus, and Charmed.

There's also the wonderful musical adaptation of Gregory Maguire's book Wicked: The Life and Times of the Wicked Witch of the West. Other current TV and films with witches and their craft as central themes include American Horror Story: Coven, Witches of East End, and... Maleficent.

Hekate, Keeper of the Crossroads

Beyond Hollywood adaptations, who is Hekate? Hekate (or Hecate) most likely originated with the Carians of Asia Minor in Turkey and came to Greece in the 6th century BCE.

Known as a triple goddess of earth, sky, and sea, in mythological art and religious iconography Hekate was sometimes portrayed as three separate figures. In Rome, the poet Ovid (C1st B.C. to C1st A.D. (trans.Boyle)) wrote that Hekate's three faces were turned outward so she could protect three-way crossroads. 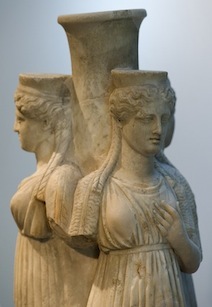 A goddess of magic, witchcraft, the moon, nighttime, ghosts and necromancy (communicating with the deceased), you will sometimes see Hekate holding keys to open the gates between the worlds. She also carried a torch to light the way, and a knife to separate the soul at the time of death, as well as for severing the umbilical cord at birth. Frequently attended by a dog or dogs, her customary offerings took place at a crossroad on the eve of a new or dark moon.

According to the Covenant of Hekate (excerpted from the book Hekate Liminal Rites by Sorita d'Este and David Rankine), Hekate was:

A liminal goddess who was present at all the boundaries and transitional moments in life. She was also an apotropaic ('evil-averting') protector and guide, as illustrated by some of the many titles she was given... over the thousands of years of her worship. Some of her well-known titles include:

Cast Away Your Beliefs

As Queen of the Night and the crossroads greeter of souls after death, Hekate is a great fit for Halloween. But, Hekate's magic was not just about death and the underworld. As healer, she helped ease the transition of the dying, and she was also associated with sacred plants, wilderness, childbirth, protection, and growing and harvest -- through her connection to the phases of the moon.

Sure, pop culture often makes Hekate look like the monstrous Wicked Witch of the West, an image most people have been raised to fear. But Hekate's guidance is needed most as we age or are going through a difficult transition. When we experience times of darkness and self-searching -- our own personal crossroads -- Hekate can be a much needed ally. Call on her during prayer or meditation, and try using this Hekate Trance Loop I recorded to get you in the mood.

A Goddess for the Ages

Although we've mostly discussed Hekate's visage of the crone, her modern priestesses sometimes take the form of fresh-faced college students, hip urban dwellers, and suburban moms toting trick-or-treaters. For a society that fears death and works hard to delay the aging process, regardless of the lines on your face, Hekate can help prepare all of us for the ultimate goodbye.

Laurie Lovekraft will be talking about Hekate and Halloween on UBN TV's "On Air with Tony Sweet: Truth Be Told"; Friday, October 31, 4:00-6:00 pm PST, archives available online after the show.