This Thursday, June 27, 2013, would have been Helen Keller's 133rd birthday. Most people think of this amazing woman in the context of the award-winning play and film The Miracle Worker, in which she is seen as a young girl trying to perceive her world and learn to communicate with the help of a special teacher. 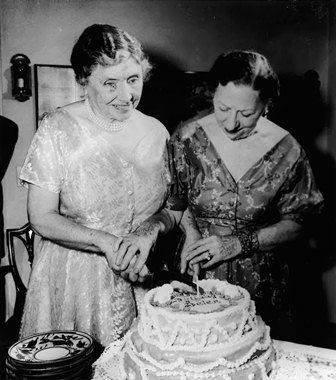 This was only the beginning of what would be a lifetime of accomplishments and influence. After learning to read, write and speak with her tutor Anne Sullivan, Helen Keller went on to graduate magna cum laude from Radcliffe College. From there, she became one of the most respected and recognizable advocates for blind, deaf, and all disadvantaged people. She lectured around the world, spoke before state and national legislatures, met 14 U.S. presidents, and authored numerous books and articles. She was also one of the founders of the organization that has become Helen Keller International and remains an inspiration for the important work we do today, nearly 100 years later, in helping to save the sight and lives of the most vulnerable people around the world.

I know that Helen Keller would be proud of all that we've accomplished in her name since she co-founded the organization back in 1915. I believe she would have been especially touched by a milestone we expect to reach as we mark 100 years of service: the elimination of blinding trachoma in Mali and Niger in 2015, and worldwide by 2020.

This path toward the elimination has been decades in the making. "Elimination" is defined in scientific circles as the reduction of disease prevalence to a level low enough to interrupt person-to-person transmission. In reaching this goal, Helen Keller International has worked as part of a dedicated community that includes generous supporters like the U.S. Government and the Conrad N. Hilton Foundation; Ministries of Health in countries throughout the developing world; the World Health Organization; and countless other organizations like the Carter Center, Lions Clubs International, ORBIS, and Sightsavers.

Eliminating trachoma is huge. It is the world's leading infectious cause of blindness with an estimated 320 million people at risk worldwide. It disproportionately affects people who live in places lacking access to clean water, sanitation, and adequate health care, with children under 10 most susceptible.

Over time, with repeated infections, trachoma can progress to a stage called trichiasis, where eyelashes turn inward, scratching the surface of the cornea every time a person blinks. The constant abrasion of the eye leads to further infection and the sufferer literally blinks themselves blind. As you can imagine, this process is also excruciatingly painful.

As with other Neglected Tropical Diseases, trachoma has proven a substantial drain on the health, productivity and economic potential of poor countries.

Trachoma is also what nearly cost Helen Keller's teacher, Anne Sullivan, her sight in the late 1800s right here in the United States. It is no longer a problem here, and the fact that we are on the cusp of eliminating the disease in two countries in sub-Saharan Africa and eventually globally is especially meaningful to all of us touched and inspired by Helen Keller's legacy.

But we are not quite there yet. While the knowledge to reach elimination in Mali and Niger by 2015 is there, significant obstacles still exist.

Last year's coup in Mali has put the success of the trachoma elimination program in jeopardy. Even with the recent signing of a peace agreement, political insecurity persists, putting delivery of antibiotics, much needed surgery and awareness raising efforts constantly at risk.

The current food crisis in Mali is another major challenge. Coupled with the political instability, it has led to immense migration of Malians living in the north over the past year. This mass migration has made it harder to track those receiving antibiotic treatments, and then to map the impact of these and other treatments, which in turn increases the likelihood of recurring infections.

There is also an urgent need to not only increase the number of trichiasis surgeries -- with tens of thousands still in immediate need in Mali and Niger alone -- but improve the quality of those surgeries so that incidences of recurrence can be significantly reduced.

Much more also needs to be done to raise awareness in communities about prevention and treatment strategies, as well as to address barriers to treatment. For example, the time needed for surgery and recovery may take away from time needed to gather water, work in the fields, and otherwise provide for their families. In some instances there are also gender barriers that discourage women from seeking services.

And while the political will is there, the countries most in need have few financial resources of their own to bring to the table. Increased government ownership of these programs is essential to ensure the elimination levels can be sustained in the long term.

Despite these challenges, the elimination of blinding trachoma is an attainable and necessary goal. Failing to move forward could reverse years of work and lead to tens of thousands of cases of blindness that could have been prevented. Public, private and civil sectors must stand united to face any hurdle that may arise in the coming months, which means keeping levels of financial resources, commitment and accountability in place.

Achieving the elimination of blinding trachoma in 2015 in Mali and Niger will reinforce the promise of global elimination for 2020 and can save the sight of thousands of children and adults. It can also serve as one of the greatest tributes to Helen Keller's legacy the world has ever seen.