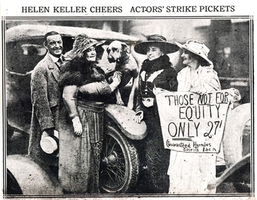 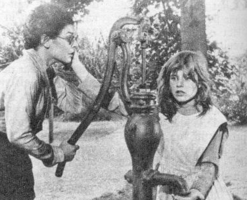 In 1919 Helen Keller (second from right) joined a union picket line outside a New York theater showing "Deliverance," a film about her life. In 1962, Patty Duke portrayed Keller in the film, "The Miracle Worker," costarring Ann Bancroft.

Today is Helen Keller Day, which commemorates her birth on June 27, 1880. Keller remains one of the most well-known, beloved, but misunderstood public figures in American history.

Nothing better reflects this than the bronze statue of Keller that sits in the U.S. Capitol. It shows the blind Keller standing at a water pump. It depicts the moment in 1887 when her teacher, Anne Sullivan, spelled "W-A-T-E-R" into one of Keller's hands while water streamed into the other hand of the seven-year-old girl. This was Keller's awakening, when she made the connection between the word Sullivan spelled into her hand and the tangible substance splashing from the pump, whispering "wah-wah,"--her way of saying "water."

This scene, made famous in the play and film "The Miracle Worker," has long defined Keller in the public mind as a symbol of courage in the face of overwhelming odds.

"Some are still dismissed and cast aside for nothing more than being less than perfect," said then Senate Minority Leader Mitch McConnell, the conservative Republican from Kentucky, at the unveiling ceremony for the statue in 2009. "The story of Helen Keller inspires us all." 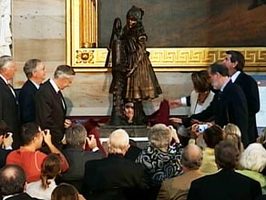 Senators Mitch McConnell and Harry Reid and Rep. Nancy Pelosi help unveil a statue of Keller in the U.S. Capitol in 2009.

When in 1980 President Jimmy Carter proclaimed June 27 as Helen Keller Day, he said: "Her incredible fight against, and eventual triumph over, the multiple handicaps of deafness and blindness made her a world-famous symbol of hope for all handicapped people."

Like most Americans, McConnell and Carter clearly had no idea that Keller was a lifelong radical who embraced socialism, pacifism, and feminism. She participated in the great movements for social justice of her time. She was the founder of what today is called the disability rights movement. In her investigations into the causes of blindness, she discovered that poor people were more likely than the rich to be blind, and soon connected the mistreatment of the blind to the oppression of workers, women, and other groups. Like all radicals -- in her own day and today -- Keller believed in justice, not just charity.

She was angry at the way she was portrayed in the popular media of her day. In a 1924 letter to fellow radical Senator Robert La Follette, Keller wrote:

"So long as I confine my activities to social service and the blind, they compliment me extravagantly, calling me 'arch priestess of the sightless,' 'wonder woman,' and a "modern miracle." But when it comes to a discussion of poverty, and I maintain that it is the result of wrong economics -- that the industrial system under which we live is at the root of much of the physical deafness and blindness in the world -- that is a different matter! It is laudable to give aid to the handicapped. Superficial charities make smooth the way of the prosperous; but to advocate that all human beings should have leisure and comfort, the decencies and refinements of life, is a Utopian dream, and one who seriously contemplates its realization indeed must be deaf, dumb, and blind."

Keller was born on a plantation in Tuscumbia, Alabama, to Arthur Keller, a former Confederate officer and a conservative newspaper publisher, and Kate Keller, a descendant of John Adams. At nineteen months old, she lost her sight and hearing as a result of a fever. She became uncontrollable, prone to tantrums, kicking, biting, and smashing anything within reach. In that era, many blind and deaf people were consigned to an asylum. Some family members suggested that this was where Helen belonged.

Instead, her mother contacted the Perkins School for the Blind in Boston, which recommended that a former student, the twenty-year-old Sullivan, become Helen's private tutor. In 1887 Sullivan -- the daughter of poor Irish immigrants and nearly blind herself -- moved to the Kellers' home. She helped calm Helen's rages and helped channel her insatiable curiosity and exceptional intelligence. She patiently spelled out letters and words in Keller's hand. With Sullivan's support, Keller soon learned to read and write Braille, and by the age of ten she had begun to speak.

Her story became well known and she became a celebrity: Newspapers and magazines in Europe and America wrote glowing stories about the young Keller. She was sometimes called the "8th wonder of the world."

Her family connections and fame opened up many opportunities for Keller, including private schools and an elite college education. Mark Twain, who admired Keller's courage and youthful writings, introduced her to Standard Oil tycoon Henry Huttleston Rogers, who paid for her education. She later acknowledged, "I owed my success partly to the advantages of my birth and environment. I have learned that the power to rise is not within the reach of everyone." 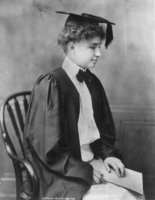 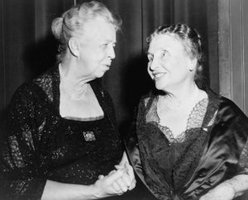 In 1901, in an article entitled "I Must Speak" in the Ladies Home Journal, Keller wrote, "Once I believed that blindness, deafness, tuberculosis, and other causes of suffering were necessary, unpreventable. But gradually my reading extended, and I found that those evils are to be laid not at the door of Providence, but at the door of mankind; that they are, in large measure, due to ignorance, stupidity and sin."

She visited slums and learned about the struggles of workers and immigrants to improve their working and living conditions. "I have visited sweatshops, factories, crowded slums," she wrote, "If I could not see it, I could smell it."

In 1908 Sullivan's husband, John Macy, a socialist, encouraged Keller to read H. G. Wells's New Worlds for Old, which influenced her views about radical change. She soon began to devour Macy's extensive collection of political books, reading socialist publications (often in German Braille) and Marxist economists. In addition to giving inspirational lectures about blindness, Keller also talked, wrote, and agitated about radical social and political causes, making her class analysis explicit in such books as Social Causes of Blindness (1911), The Unemployed (1911), and The Underprivileged (1931). In 1915, after learning about the Ludlow Massacre -- where John D. Rockefeller's private army killed coal miners and their wives and children in a labor confrontation in Colorado -- Keller denounced him as a "monster of capitalism."

In 1909 Keller joined the Socialist Party, wrote articles in support of its ideas, campaigned for its candidates, and lent her name to help striking workers. Although she was universally praised for her courage in the face of her physical disabilities, she now found herself criticized for her political views. The editor of the Brooklyn Eagle attacked her radical ideas, attributing them to "mistakes sprung out of the manifest limitations of her development." In her 1912 essay "How I Became a Socialist," published in the Call, a socialist newspaper, Keller wrote, "At that time, the compliments he paid me were so generous that I blush to remember them. But now that I have come out for socialism he reminds me and the public that I am blind and deaf and especially liable to error."

Keller was part of wide circle of reformers and radicals who participated in a variety of overlapping causes. She was a strong advocate for women's rights and women's suffrage, writing in 1916: "Women have discovered that they cannot rely on men's chivalry to give them justice." She supported birth control and praised its leading advocate, Margaret Sanger, with whom she had many mutual friends. Keller argued that capitalists wanted workers to have large families to supply cheap labor to factories but forced poor children to live in miserable conditions. "Only by taking the responsibility of birth control into their own hands," Keller said, "can [women] roll back the awful tide of misery that is sweeping over them and their children."

She donated money to the National Association for the Advancement of Colored People (NAACP) -- then a young and controversial civil rights organization that focused on opposition to lynching and job and housing discrimination against African Americans -- and wrote for its magazine. At an antiwar rally in January 1916, sponsored by the Women's Peace Party at New York's Carnegie Hall, Keller said,

"Congress is not preparing to defend the people of the United States. It is planning to protect the capital of American speculators and investors. Incidentally this preparation will benefit the manufacturers of munitions and war machines. Strike against war, for without you no battles can be fought! Strike against manufacturing shrapnel and gas bombs and all other tools of murder! Strike against preparedness that means death and misery to millions of human beings! Be not dumb, obedient slaves in an army of destruction! Be heroes in an army of construction!"

In 1918 she helped found the American Civil Liberties Union, which was initially organized to challenge the U.S. government's attempts to jail or deport radicals who opposed World War I, including Socialists and members of the Industrial Workers of the World, and to suppress their ideas.

The following year she wrote a letter, addressed to "Dear Comrade," to Eugene Debs, the Socialist labor leader and presidential candidate who was in jail for advocating draft resistance during World War I. She wrote, "I want you to know that I should be proud if the Supreme Court convicted me of abhorring war, and doing all in my power to oppose it."

In 1919 Keller played herself in a silent film about her life, Deliverance. On August 18 that year, the actors at the New York theater where the film was being shown went on strike, and Keller joined the Actors Equity union's picket line and spoke at their strike meetings. In an article for the Call, Keller wrote that she would "rather have the film fail than aid the managers in their contest with the players."

After 1924 Keller devoted most of her time and energy to speaking and fund-raising for the American Foundation for the Blind. But she still supported radical causes. Even as feminism began to ebb, she continued to agitate for women's rights. In 1932 she wrote an article for Home magazine, "Great American Women," praising the early suffragists Susan B. Anthony, Lucy Stone, and Elizabeth Cady Stanton, and she penned a humorous article for the Atlantic Monthly, "Put Your Husband in the Kitchen."

Between 1946 and 1957 she visited 35 countries on five continents. In 1948 Keller visited Hiroshima and Nagasaki, cities destroyed by American atomic bombs at the end of World War II, and spoke out against nuclear war.

In 1955 at the height of the Cold War, she wrote a public birthday greeting and letter of support to Elizabeth Gurley Flynn, a leading Communist activist, then in jail on charges of violating the Smith Act. In response, some supporters of the American Foundation for the Blind (AFB), for which Keller was the national face, threatened to withdraw their support. The AFB's executive director wrote to one of his trustees, "Helen Keller's habit of playing around with communists and near communists has long been a source of embarrassment to her conservative friends."

The FBI kept Keller under surveillance for most of her adult life for her radical views.

But Keller, who died in 1968, never saw a contradiction between her crusade to address the causes of blindness and her efforts to promote peace, economic equality, and social justice.

Keller is well known for being blind, but she also deserves to be heralded for her progressive social vision.

Peter Dreier is the E.P. Clapp Distinguished Professor of Politics and chair of the Urban & Environmental Policy Department at Occidental College. His most recent book is The 100 Greatest Americans of the 20th Century: A Social Justice Hall of Fame (Nation Books)