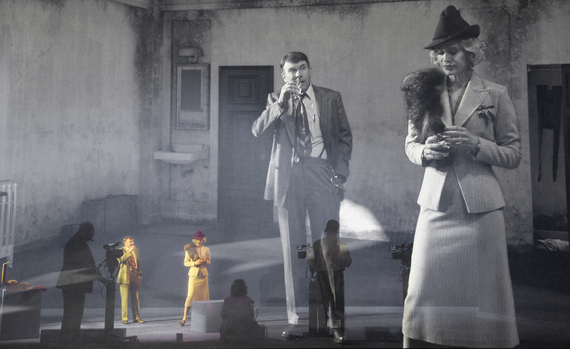 The Brooklyn Academy of Music is currently presenting a great theater/film production by impressive visual artist (you can see his art-work at David Zwirner Gallery) and Canadian Stage director, Stan Douglas, with television writer (Boardwalk Empire) Chris Haddock. Borrowing from foreboding, moody film noir, Helen Lawrence kept the audience drawn to its story and fascinated by its visual duplicity. Not something we have seen before. A refreshing process that engages us intimately with the actors in their ability to tell the story and see their expressive faces plainly, in real time.

Canadian Stage's excellent actors were channeling Damon Runyon from grave to stage, as authentically as if they were living in the time of its setting directly after World War II, when the world was wonky with back alley bookies, crooked cops, and murderous dames. They had to be thoroughly on their stage toes, since working on a nearly empty set with cameramen (dressed late 40's garb), shot their scenes, which appeared on the big screen upstage, in front of them, on a translucent scrim. The set was virtually on the screen, while the actors provided the action behind it on the stage. With little material set and being aware of the virtual walls, the action took tremendous skill, but appeared effortless by the cast. It at times seemed very real and at times fabulously phony. And it all worked beautifully.

The whole thing was so well done and perfectly timed, that it seemed like uncanny luck, rather than amazing dexterity and focus.

Every actor was superbly in synch with their fellow player, as the dark murderous story of corrupt police, murder, betrayal and love unfolded. Mr. Douglas and Mr. Haddock mastered this special process with absolute cool. Let's hope we see more of them in New York City in the future.