San Francisco Ballet finishes its programs at the War Memorial Opera House with eleven performances of Helgi Tomasson's Romeo and Juliet beginning Friday, May 1 and concluding Sunday, May 10. The entire season has been a glamorous and artistic triumph for the Company and a stunning tribute for the 30th Anniversary of Helgi Tomasson as Artistic Director. Last seen in 2012, Romeo and Juliet is luxuriant and passionate, the look is Renaissance Chic. Set on the 1935 score by Sergei Prokofiev, Tomasson's choreography illumines the composer's bold and descriptive approach to the music and fleshes out the anguish and rapture of Shakespeare's most beloved cast of characters.

"Did my heart love till now!" exclaims Romeo, "forswear it, sight! For I ne'er saw beauty till this night." [Act I, scene v] 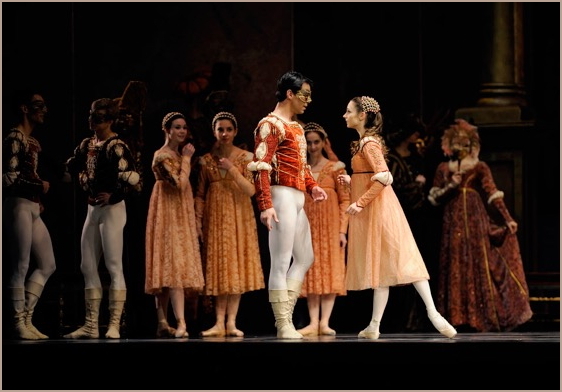 Though its position on the charts may shift from hour to hour, Romeo and Juliet generally heads the line of Shakespeare's most popular and frequently quoted plays. The story is within reach somewhere everyday and its adaptations into film, opera, ballet, symphonic poems and the definitive Broadway musical are available in every variety of media anywhere at any time. My first experience of the drama happened during the fourth grade at Saint Monica's, when I'd faked a cold in order to stay home and indulge my fascination with actress Norma Shearer. That day, the featured "Morning Movie" was MGM's very posh 1936 production of Romeo and Juliet which teams her with Leslie Howard, Basil Rathbone, and John Barrymore. (No, I didn't own-up to my transgression in the confessional.) Helgi Tomasson associates his first awareness of Romeo and Juliet with Christmas time in Reykjavik, Iceland. There it's about the shops closing at 11:30pm on the 23rd and staying closed until the morning of the 27th. "It was very normal," he said, "for kids to get a lot of books as Christmas gifts." This was also during the era before shrinkwrap.

"The thing was to read at least one or two of the books in those three days and return them on the fourth day and say, 'I got two of these. Can I exchange it for another book?' Gosh, the youth just wants to read.... So, I read a lot. I'm sure that's when I was first exposed to Romeo and Juliet. As I became a dancer, I saw the films - such as the one you mention. I always wanted to do the romantic roles. The first opportunity I really got - or was going to get - was through Antony Tudor at Ballet Theatre. He wanted Marcia Haydée and me to be brought in to dance the two leads. At the time, she was dancing somewhere else and I was with Harkness Ballet. I was thrilled. I loved the story, I loved the music. I always wanted to dance that role. It was Tudor's own version. I only had one day of rehearsal with him in the studio. Unfortunately, something happened and it didn't pan out. And through my very long and wonderful career, I never had the opportunity to dance Romeo." 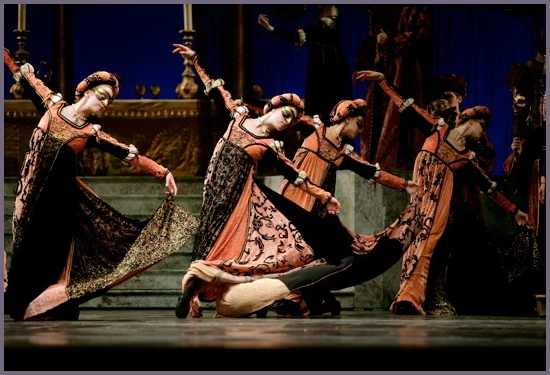 "When I came to San Francisco Ballet, we needed to expand the repertory. At that time, I was working very well with Danish set designer, Jens-Jacob Worsaae, who did a few small ballets for me. Then he did Swan Lake. It was the first time we did it here. We did Sleeping Beauty which was also done at the Royal Danish Ballet. Then I decided I had the right people for Romeo and Juliet. Maybe it's because I never had the opportunity to dance it that I decided to go ahead and produce it. Why not? I would like to think I just poured my soul into it - the way I felt the music should be interpreted. So, here we are, with this version which I created in 1994. Over the years I've been very blest with having some beautiful dancers in the roles."

Since I will be seeing a newcomer to the role of Juliet - Mathilde Froustey, who joined San Francisco Ballet as a Principal Dancer in 2013 - I asked Helgi how he introduced the choreography in her first rehearsal.

"The first thing I taught her was a small pas de deux after the Ballroom. Juliet is reminiscent about the wonderful experience of being there, with all those people, the beautifully dressed women - 'I danced and my father introduced me!' She has also looked at some young lad, but only through the mask. Juliet is curious and smitten, a teenage crush. He comes back in the ballroom alone. He has been following her, because he is also smitten. The pas de deux shows the two young teenagers' infatuation with one another. It's not a deep love pas de deux, but more of a getting to know you. Romeo removes his mask. Juliet is very pleasantly surprised. He is handsome. Wow! That kind of thing. So, we started there - with the least complicated pas de deux - just to introduce her into my way of seeing the role. Then we went on to the balcony pas de deux and the bedroom pas de deux. Then everything in-between, such as the scene with the parents wanting her to marry Paris and she can't tell them that she has already been married secretly, all those things. It's communication - showing her what I want, how I want it done. And yet I'm always going to look at what the dancer brings to it. I don't want all the Juliets to be absolutely cookie cutter, all the same. I like individuality in dancers. I give them the framework, the choreography. Now show me who you are. Show me your Juliet, your Romeo, or your Mercutio." 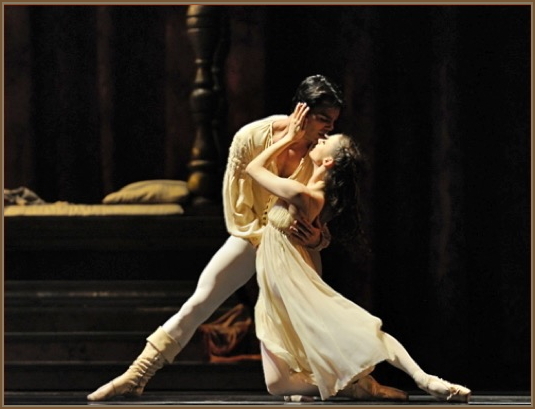 "We have a certain synopsis in which I quote Shakespeare. As for the dancers themselves, occasionally I have given them the line from the play that relates to the moment. Since we're not doing the spoken word, but portraying the roles through our bodies - it has to be a body language. How do you achieve that? By giving them images of feelings. For instance, in the bedroom pas de deux, Romeo puts on his cape and she goes to him and pleads, 'Don't leave me.' You can convey that in body language. You grab his shoulders and plead, 'Stay, stay!' Or to Romeo, as he walks with her and reassures her - promise her you will be back. 'Don't worry about me, I will definitely be back. Wait for me.' You can say those kinds of things in the body language. I encourage them to read the play, but I don't say that when you do this step it represents that line. Dance is an emotional art form."

Since its world premiere twenty-one years ago, many young and dream-filled dancers have seen and been motivated by Helgi Tomasson's ballet. For some in the audience, it may be a first time experience with the whole idea of Romeo and Juliet - perhaps, even of Shakespeare. The breaking news is that this season's production is being filmed and will be commercially released. I asked Helgi about the other classic ballets that bear his stamp - Sleeping Beauty, Swan Lake, and Giselle. Is Romeo and Juliet the one closest to his heart? 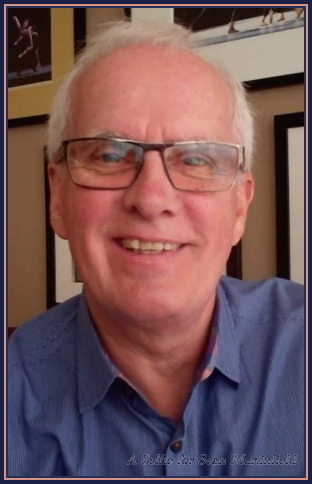 "With Giselle, you can use the traditional - what has been done through the ages. You don't want to change that. Swan Lake is the same - you don't want to mess with the second act of Swan Lake. So, it's been about putting things of mine in here while keeping that there. Whereas with Romeo and Juliet, every step you see is mine. Everything they do is mine. And Marty Pistone has been very good helping with the fighting sequences. So, yes, this is a production that is very close to me. I have done everything from the beginning to the end."

Easy prediction: Helgi Tomasson's Romeo and Juliet will stand the Test of Time.