There are parents who hover over their kids like a helicopter. And there are parents who generally leave their kids to their own devices. Both are insistent that their way is the right way. I'm not here to judge other parenting styles, though I assume, as is often the case, that it's a healthy mixture of both -- allowing your kids the independence needed, coupled with the security of boundaries and a loving home base -- that proves to be most effective. But what do I know? Figure it out yourself, and I'm sure you'll let me know when you do. Because every parent seems to be a maven in all things parenting.

I'm here to talk about something entirely different than helicopter parents: helicopter kids. When I take my kids to the park I struggle to shake them off of me like a ragdoll in the jaws of a tenacious pit bull. They're clingy, they check in constantly, and they compete for my attention -- and all I really want is for them to get the hell away from me. "Go on the slide. Go bounce a ball. Go keep that homeless guy company who's talking to himself and could probably use a conversation partner." But little chance.

I pick up my kids from preschool and look around the playground. There are kids on slides, kids in three-wheelers, and kids chasing each other. My kids? My daughter, Sydney -- almost five -- is getting her hair braided in the lap of her cute young teacher with the pink highlights; my son, Asher, three, is helping to clean and rake the sandbox with his teacher. This is a playground filled with kids -- why are they hanging out with the teachers? 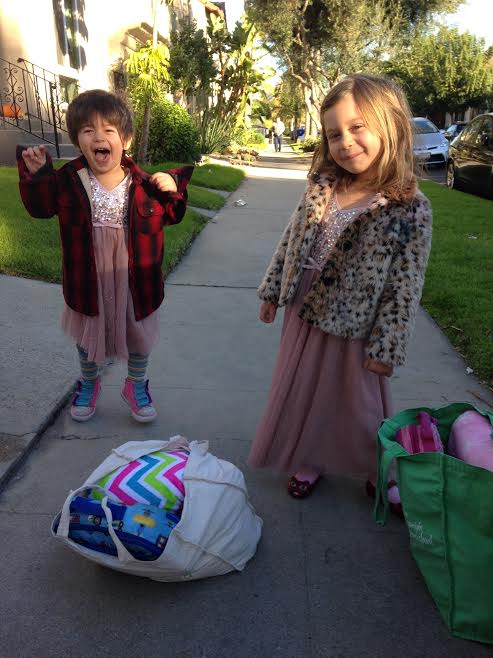 My kids are well liked by their peers. They're socially adept and smart. But when given the choice of chasing a kid up a hill, or sitting with my wife and me on a park bench, they choose us. Even when their friends are begging them to play. They might occasionally run off with another kid for a few minutes, but they're not gone for long. There is an ongoing societal debate about kids watching TV -- should they, shouldn't they, should it be limited? We don't have that issue. True, the iPad can suck them in -- but only if we're nearby. They've never sat through a movie. They watch movies, but not in their entirety. We throw on Annie, and sneak away, only to hear them running down the hall to our bedroom 20 minutes later, and climbing into our bed. I beg them to go away. I insist. "You've never gotten past the first act. Keep watching. Annie gets out of the orphanage. It's not always a hard knock life for her!" But they don't care. I pick them up and plop them down in their room to play with each other. They come back to ours. No matter what I do, they always come back. "I love you guys, but leave me alone," I beg. They play for a few minutes, which quickly turns into a wrestling match, or a tug of war over a toy. And they're back again, running to us for help, one or both of them in tears. I say, "Solve it yourself. You don't need us." Sometimes it works. Sometimes it doesn't. But either way, they have managed to worm their way back to us.

I'm flattered that my kids like their parents so much. They enjoy being with us -- and I know it won't be long before they want nothing to do with us. I know this, and yet I feel like if these nerds don't start making friends they're not going to have anyone to hang out with when it comes time for them to hate us. They'll just be angry, and stuck at home, locked in their room listening to whatever version of The Smiths is around for sad teenagers.

At their friends' birthday parties, they take a long time to warm up to the crowd. They spend most of the party with each other, and within inches of my legs. At one party in the park last week another parent, Monique, walked over and gave me a kiss hello. "Have you seen Dash?" she asked. I looked around for her son. He was climbing a tree, albeit not very well. What he lacks in coordination he makes up for in confidence. I pointed in his direction. Monique looked to my kids. "They're always on top of you," she said. She wasn't criticizing. She was just pointing out the anomaly. "It's good they think you're so fun." She thinks I'm a clown, perpetually happy and silly. She doesn't know the side of me who broods, and worries, and gets frustrated with my kids. She's never heard my daughter yell out, "You're a bad daddy!" So I went along with the ruse. "I wish I wasn't so awesome," I said with a wink. She playfully hit me on the arm and then took off after her kid.

A week later I was picking up the kids from school and my wife called to tell me she was going out with her sister for the night. I saw Monique on the playground and made impromptu plans with her and her husband to take the kids out for pizza and ice cream. Their son, Dash, jumped in my car and asked if he could ride with us. There wasn't enough room so I asked Asher if he wanted to ride with Dash's baby brother. He ran right over to their car and hopped in. He doesn't know Monique well but I assume he must have sensed that she's Argentinian, and was all over that like blanco en el arroz. Meanwhile, in my car Sydney and Dash were sitting in their car seats talking to each other. I leaned my head back to talk to them but they weren't that interested in what I had to say. There was a moment where I wasn't even sure what they're talking about -- and I was actively trying to eavesdrop. Dash has a slight speech impediment and he's a little hard to understand -- at least to me. Sydney didn't seem to notice. She laughed at his joke but I didn't get it. What was the joke? I asked them to explain it to me but they just giggled. I felt left out.

We parked on Larchmont and headed towards Village Pizzeria. The kids ran ahead of me. They ducked into a store but I was distracted by a text message on my phone and wasn't sure which one. Monique and Asher came up behind me. "Did you see where the kids went?" I asked. Monique pointed to a little boutique. I walked in. A woman with a sourpuss face was speaking on the phone. She was indifferent to the two kids standing at the jewelry case. I walked over to them, as I overheard Sydney tell Dash she liked the gold necklace with the long charm hanging from it. Dash waved his hand over all of the jewelry, "I'm going to buy you all of them." Sydney laughed. I defensively said, "Sydney, you don't need a man to get you anything. You'll buy your own jewelry." She looked at me confused. So did Dash. Then they ran off to the pizza place without me. I heard Asher chasing after them -- "Wait for me!" And even though I was only a few paces behind them, something in me ached as my helicopter kids stopped hovering and learned how to fly.