Last week, during the women's gymnastics qualifying competition of the 30th Olympiad in London, my wife and I watched with a combination of horror and incredulity as the parents of U.S. Olympian Aly Raisman went through a series of grotesque, seemingly maniacal contortions during their 18-year-old daughter's performance on the uneven bars.

"That video is going viral," my wife predicted immediately. And she was right, leaving the Raismans overnight-Youtube sensations, not to mention the subject of widespread ridicule and snickering. Vanity Faire's Michelle Collins cracked that the Raismans' grandstand performance was "straight out of the Kristen Wiig/Fred Armisen oeuvre." To put it mildly. 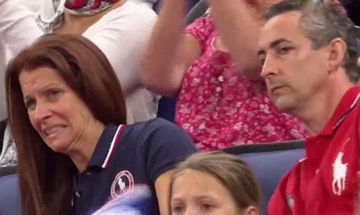 I was appalled on several fronts: First, at NBC for invading the parents' privacy. I was certain Raisman's parents--in particular, her mother Lynn Raisman--had Tourette syndrome, or some other neuropsychiatric disorder, that had now been divulged to an international audience.

Not quite. An interview with the Raismans, conducted the following day on NBC's "Today Show," revealed that they were apparently normal and loving parents, albeit besieged by an acute case of what has been dubbed "helicopter parenting," a phenomenon in which mothers and fathers hover over the children's every move in every aspect of their lives.

More than that, however, I've been appalled at the way in which NBC's Olympic coverage has become a celebration of parents crossing the line from healthy support of their children into a neurotic condition of living their lives through the experiences of their offspring, with some obviously believing that their children's dreams and accomplishments are actually their own.

I've been involved in youth sports for nearly 50 years, as a player, as a coach (from GALS softball to high school varsity baseball), and as a parent. This past I served as the coach of a regional Pony League all-star team composed of 13-year-olds. What I have witnessed over the past half-century is an evolution of parental involvement from enthusiastic encouragement to debilitating interference in the lives of their children on the playing field. It's endemic. And NBC has played into the pathology.

Honoring the families that produce our Olympians is a nice touch. It humanizes the athletes and puts their accomplishments in an important social context. This year, however, NBC has taken its parental coverage a dangerous step further. By focusing so much attention on the parents during the athletic performances--NBC has actually placed wireless microphones on many of the Olympic parents in a bizarre homage to reality television--the network is sending out the wrong message to American families. It encourages and glorifies precisely the wrong type of parenting for American children.

On NBC's official web site for the Olympics, the network featured the Raisman footage under the rubric "Top NBC Moments of the London Games," with the empathetic caption: "Being an Olympian is hard. Being a mom of an Olympian is even harder."

Really? Should it be? Such a perception is thoroughly insane.

What we are seeing repeatedly in NBC's orgy of Olympic coverage is the glorification of this sensibility. In virtually all of its pre-event profiles of American athletes, NBC's primary focus is on their parents--Michael Phelps' mother should be getting residuals and medical benefits for all her on-screen appearances--as though there were no boundary between the parents and athletes themselves. In many cases, the profiles of the Olympians focus on the fact that their parents were athletes in their youth--though, in most instances, never quite as good as their kids--and one of the subliminal messages is that they are living out their own failed athletic dreams through their children.

The day after Aly Raisman and her colleagues on the women's gymnastic team, dubbed the "Fab Five," claimed Olympic gold, their parents were paraded onto the "Today Show," during which hostess Savannah Guthrie trumpeted the ways in which the parents had "loved, cared for, sacrificed, worried, bitten nails" on behalf of their children.

The Raisman parents themselves were hailed as "stars from these Olympics" for their prolonged cameo in the stands. A somewhat embarrassed Ricky Raisman said that he was normally "laid back" and that he had simply gotten caught up in "one of those locked-in moments and I just let it out." (I couldn't help but wonder if all the attention on the Raisman parents had impacted their daughter's concentration a few days later during her performance in the women's all-around competition, in which she rather surprisingly failed to claim an individual medal after falling off the balance beam.")

This Olympic helicoptering has taken some strange turns. Perhaps even more bizarre than the Raismans' behavior has been the continued commentary of Ileana "Ike" Lochte on the sexual life of her son, gold medal swimmer Ryan Lochte. Once again on the set of the "Today Show"--where else?--she felt compelled to inform the world about her son's "one-night stands," then doubled down on the matter in an interview with Us magazine, explaining that the reason he isn't able to commit to a sustained relationship is that "he doesn't have the time" and that "it wouldn't be fair to the girl."

Poor Dr. Ruth had fits. "Seems to me your mother shouldn't be discussing your sex life on national TV," she tweeted. But what was most fascinating--and, indeed, troubling--to me about the Us interview were mama Lochte's concluding comments about her son's athletic persona. "Sometimes you want to kill him! He's a little too laid-back sometimes. Sometimes I just want to shake him and say, 'Do you get it?'"

Kill him? Shake him? We get it, alright. Trust me, America, all of this is extremely unhealthy. Should I note that Ileana Lochte is a swim coach?

Procter and Gamble, a major sponsor of NBC's Olympic overage, has capitalized on this cultural neurosis by peddling the likes of Tide and Pampers with a commercial featuring very young children performing at the Olympics and the tagline: "To us, they're Olympians. But to their moms, they'll always be kids."

Let them grow up! We all want what is best for our children (and, I suppose, this includes healthy sex lives, too), but we are not doing anyone any favors by getting so enmeshed in their young adult lives. And NBC is not doing American athletes--or American families, in general--any favors by honing in and celebrating this pathology of problematic parenting.

By placing cameras and microphones in the stands during the actual competition, NBC is reinforcing the delusion--like the Raismans going through all their grotesque contortions last week--that parents somehow are executing the performances themselves and, that indeed, they should be viewed part of the performance dynamic.

As Americans, we need to let our children do their own thing--on the athletic field, in classrooms, in the work place, and yes, in the bedroom--and to foster a sense of independence and autonomy in all of their daily activities. Helicopter parenting paralyzes our children--and NBC is only adding to the national pandemic by focusing on the parental rotor-blades spinning dangerously out of control.

In the "Today Show" segment on the parents of Olympic gymnasts--after the Raismans had been identified as "stars"--there was a moment of sanity uttered by Mike Maroney, father of gymnast McKayla Maroney (and, yes, a former Purdue quarterback himself). "The best thing a parent can do is just support them and let them live their dream," Maroney père intoned. "Don't make it your dream. It has to be theirs. If they want it bad enough, they're going to be able to achieve it on their own." Words to parent by, I would argue--and a recognition that the line between healthy parenting and national neurosis is really not so fine. NBC take note.

Award-winning writer and filmmaker Geoffrey Dunn's best-selling The Lies of Sarah Palin: The Untold Story Behind Her Relentless Quest for Power was published by Macmllan/St. Martin's in May of 2011. He is currently at work on a book entitled A Thoroughly Dangerous Form of Madness: Little League and the Ruination of the National Pastime.